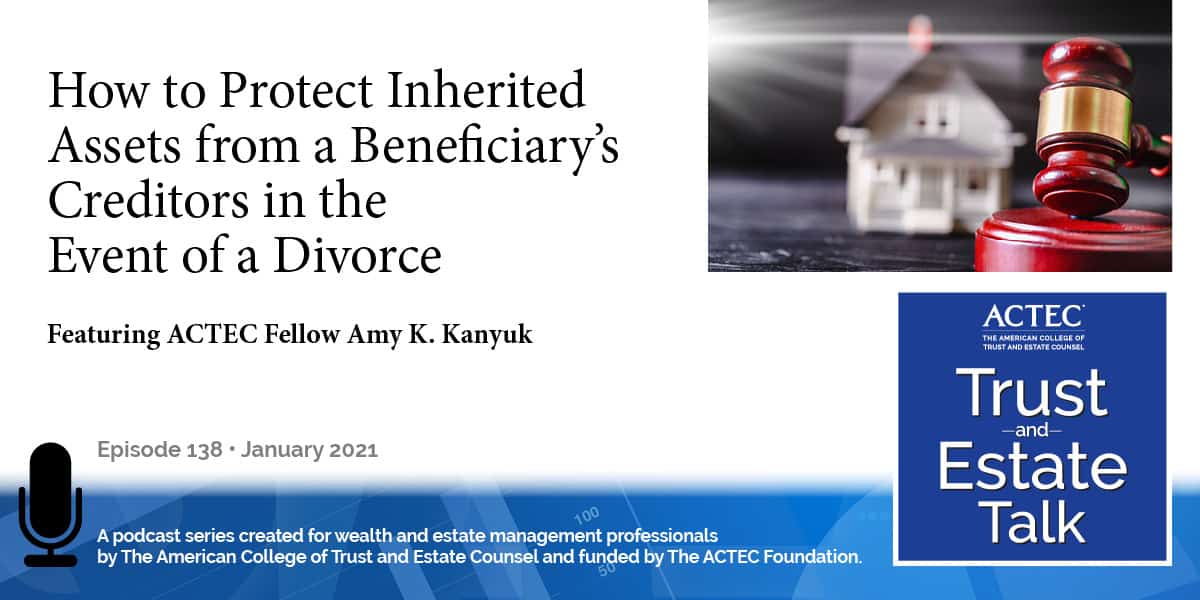 “How to Protect Inherited Assets from a Beneficiary’s Creditors in the Event of a Divorce,” that’s the subject of today’s ACTEC Trust and Estate Talk.

This is Susan Snyder, ACTEC Fellow from Chicago. The grantor of a trust doesn’t want a beneficiary’s interest in the trust to be subject to the claims of creditors, especially when the creditor is a divorcing spouse. To educate us more on this topic you’ll be hearing today from ACTEC Fellow, Amy Kanyuk of Concord, New Hampshire. Welcome, Amy.

Today we’re going to focus on how to help clients structure trusts so that the inheritances they leave for their children and further descendants are protected in the event of a divorce. When people get divorced, their marital property is generally divided equally between them. But what constitutes marital property depends on state law. In some states, all of the couple’s property, regardless of its source, is divided between the spouses. But other states distinguish between marital and separate property and count inherited assets as separate property that isn’t subject to division. The problem, of course, is that even if we know where the client is living when he or she is creating the trust, we may not know where a beneficiary is going to be when he or she gets divorced. So, you want to structure the plan to maximize the protection of the trust assets, regardless of where people happen to be living when the marriage ends.

First and foremost, what the client should avoid, if possible, is including in a trust agreement, a mandatory distribution or withdrawal right. If a beneficiary can, as a matter of right, access trust property, the beneficiary’s creditors can almost always access it too, either directly from the trustee or from the beneficiary when the money is distributed from the trust to the beneficiary. So, you’d want to avoid, if possible, giving beneficiaries mandatory income rights, withdrawal powers, and lifetime general powers of appointment. You also should try to avoid mandatory distribution provisions, like giving a beneficiary the power to withdraw trust property in stages over time. For example, a third at 30, half at 35, and the balance at 40. However, these tend to be the types of provisions that clients actually want to include in their trust. So, we need to find a way to draft the trust to minimize the exposure of the trust assets in a divorce, but still keep the client happy.

You could start out by including a spendthrift provision in the trust agreement. That provision prohibits the beneficiary from assigning or transferring his interest in a trust and prevents a creditor from collecting a claim directly from the trustee. In other words, the creditor can only attempt to collect from the beneficiary after the beneficiary has received the distribution.

You also should think about including a provision that specifically states that nonbeneficiaries have no rights in the trust. In other words, that the trust property is available only to the beneficiaries of the trust to the exclusion of any other person, including a spouse in the event of divorce. When interpreting a trust agreement, the grantor’s intent is the controlling factor. So, the more you can demonstrate in the agreement that the grantor intends to protect the trust property from the beneficiary’s creditors, the more you’re going to help the trustee and the more protection you can provide to the beneficiaries.

For example, if the grantor really wants the beneficiaries to get the income from the trust, or a certain percentage of the value of the trust each year, the precatory language could encourage rather than require the trustee to make those distributions. But the trustee should avoid a regular pattern of discretionary distributions because those could, in a divorce, be interpreted by a judge as a property right that will cause the trust assets to somehow come into play in a property settlement.

The choice of trustee is always important, but it’s especially important when viewed through the lens of creditor protection for the beneficiaries. The safest bet is using a sole disinterested trustee who has discretionary distribution powers. If at some point a beneficiary becomes entitled to an outright distribution of trust property, for example, when reaching a certain age or when the trust terminates, that property is subject to the beneficiary’s creditors. If that happens, you can give the trustee the power to withhold, in a further trust, property that is subject to the outright distribution.

Protecting trust assets from a beneficiary’s creditors is a complicated subject that also has tax consequences. However, thoughtful planning will allow the beneficiary to enjoy the trust property while still protecting it.

Thanks Amy, for teaching us about creditors’ rights against a beneficiary involved in a divorce.

Other podcasts of interest: