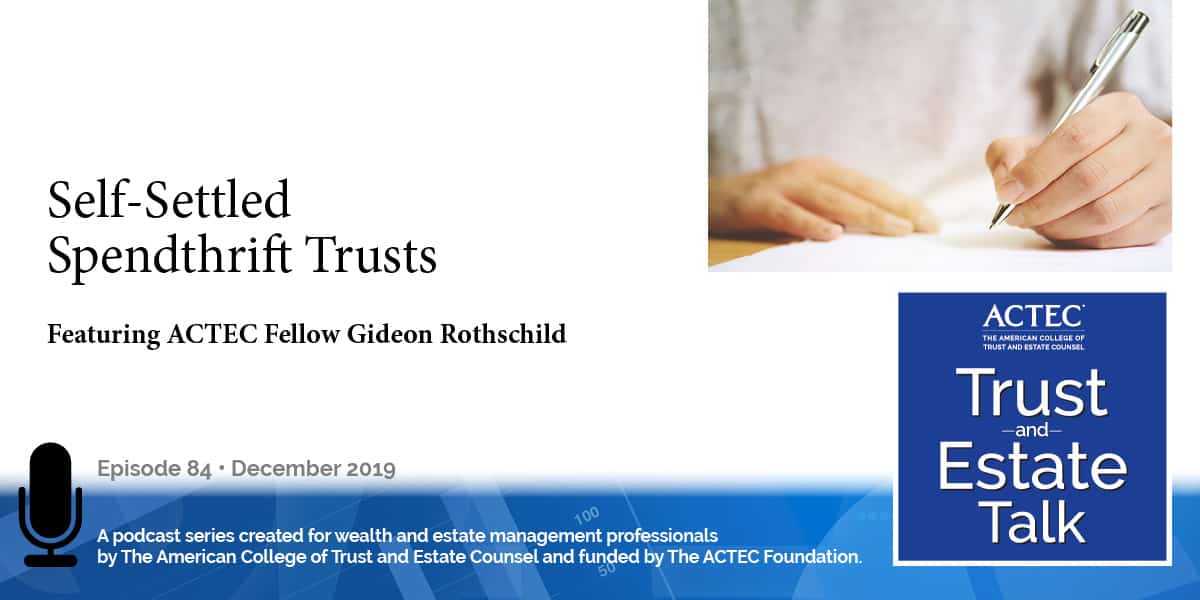 This is Margaret Van Houten, ACTEC Fellow from Des Moines, Iowa. To give us more information on the topic of minimizing the risk of challenge to self-settled trusts, you will be hearing today from ACTEC Fellow, Gideon Rothschild from New York City. Welcome Gideon.

Thank you, Margaret. We have had a number of cases in the last 10 years challenging self-settled or otherwise referred to as asset protection trusts and when you look at the structure of these trusts, there are obvious faults to them. The biggest fault is in most of these cases, bad fact cases, there was a clear indication of a fraudulent transfer. So, the very first thing we want to consider in minimizing the risk of challenge is to ensure that there is no fraudulent transfer taking place. Now, a number of states have already adopted the new Uniform Voidable Transfer Act, which is the successor to the Uniform Fraudulent Transfer Act, but in essence the substantive aspects of the law are very similar to what previous law provided and in essence if a transfer is made, which renders the individual, the debtor, insolvent or unable to pay his debts or is made with actual intent to hinder, delay or defraud present or future creditors, that constitutes a fraudulent transfer.

And, the best way to protect against a fraudulent transfer finding is to do a solvency analysis and only consider transferring a nest egg of assets. So, if a client has, let’s just say 15 million dollars net worth and wants to protect a third–of course, the clients may want to protect as much as you allow them to protect–but a more conservative approach and more defensible approach would be to protect a third. Now, my partner and I, Dan Rubin, wrote two articles for Trusts & Estates recently, and in that article one of the quotes we took out of a decision, one of the earliest decisions with respect to self-settled trusts, was the Lawrence decision out of the bankruptcy court in Florida where the court stated that , “The debtor testified that when the trust was settled, the assets transferred represented an excess of 90 percent of its liquid assets, and this court finds it impossible to believe that the debtor surrendered 90 percent of his assets to a stranger on the other side of the world without maintaining some control over them.” So, in order to avoid that appearance — and it does not matter what you might think, what the debtor might think; at the end of the day, it’s what the judge is going to think. And so, our recommendation is to use a nest egg approach and that would be the best defense for a fraudulent transfer attack.

Now, there are other aspects of structuring these trusts that one needs to be concerned about. One might be, where I said earlier, that a fraudulent transfer is defined as an “actual intent to hinder, delay or defraud present or future creditors.” Well, if you can demonstrate that the intent of establishing a self-settled trust was something other than protecting against, even future unknown creditors, you have a much greater chance of withstanding a challenge. What do I mean by that? Well, today we have an 11.4 million dollar estate and gift tax exemption and if a client is married, that’s almost 23 million dollars that they can shelter for estate tax purposes. Well, what if you had a client, with again 15 million dollars and perhaps instead of doing a self-settled trust as an incomplete gift transfer, you were to transfer it as a completed gift transfer?

Now you might wonder, could you set up a self-settled trust and make it a completed gift? And, the answer is yes, if you follow the Private Letter Ruling 200944002, that dealt with an Alaska self-settled trust. The IRS concluded that as long as the settlor did not retain any strings under 2036, 2038 etc., that the gift was a completed gift; and furthermore, they said that as long as there was no implied understanding with the trustee or perhaps patterns of distributions being made regularly to the settlor, that transfer should also be one that is excluded from the settlor’s estate at death. So, you could set up a self-settled trust, utilize the exemptions that we have, the generous exemptions that we have today, and this may be something that planners would want to do anyway in order to perhaps have your cake and eat it too. If someone has a modestly wealthy estate of say only 25 or 30 million, it’s hard to convince them to give away 11, let alone 23 million to a trust for the benefit of their children, but if they can have assurance that they could get it back by using a self-settled structure, not only will that cover the estate and gift tax issues, but it should also be a very valid reason for establishing such a trust aside from creditor protection purposes.

The third thing I would want to emphasize is, who you select as your trustee. Often times, individuals might be likely to want to control the assets they have transferred either directly or indirectly through perhaps a spouse or a friend or a relative, and I would suggest that if you select an independent trustee, it is more likely that the Is will be dotted and the Ts will be crossed in a proper manner so as to not appear that the trust is simply a sham or an alter ego; one wants to administer the trust in a formal manner, and it will be most likely defensible when challenged in the future.

And finally, I would say, well, two more points I would add. And that is, what assets to transfer to the trust? The recent case of Toni 1 v. Wacker out of the state of Alaska, which again unfortunately seemed to be a fraudulent transfer, made the additional mistake of transferring real estate situated in Montana to an Alaska trust. Now, normally the governing law set forth in the trust would be the applicable law that the court would apply, but where it’s real property, it’s the law where the property is located and so in this case since the property was located in Montana, it’s unclear why the court did not simply dispense with the issue at hand, which was the actual issue in that case was which state’s fraudulent transfer statute of limitations applies? Was it the Alaska statute, which required clear and convincing evidence, or was it the Montana statute? They could have simply said that this trust should be governed under Montana law because it owns Montana real estate. Had they transferred that real estate to an LLC, perhaps, or to a partnership and then the trust would own a partnership or LLC interest, then the likelihood of the law governing the trust, set forth in the trust, is the governing law should apply and a much better result might have occurred; although in this case it was the fraudulent transfer that dealt that trust the death blow.

And lastly, I would caution planners not to rush into a bankruptcy court when a self-settled trust is involved. The bankruptcy court decisions have not been friendly to debtors. Bankruptcy courts are typically more pro-creditor than pro-debtor and certainly section 548(e) of the Bankruptcy Code provides that the statute of limitations for a transfer made to a self-settled trust or similar device made within 10 years of filing a bankruptcy petition, is a fraudulent transfer. So, you have a much longer statute of limitations period to contend with and perhaps a not-as-friendly court to deal with and so those are the takeaway points that I would offer for today. Thank you.

Thank you, Gideon, for giving us more information on self-settled spendthrift trusts.