The Impact of Tax Reform on Trusts After Divorce 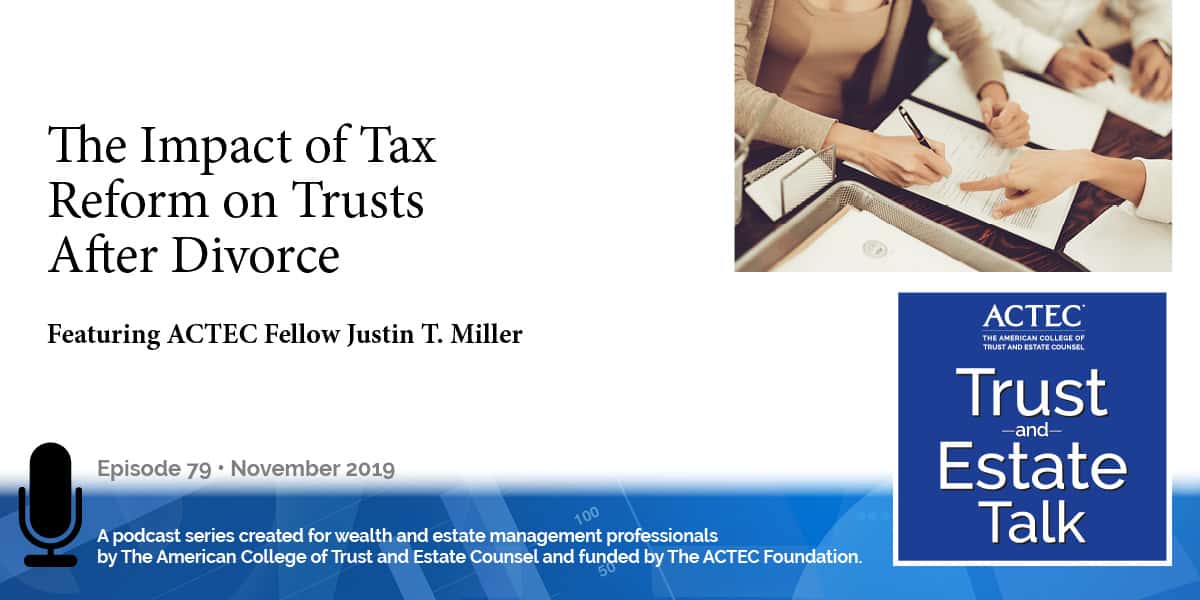 “The Impact of Tax Reform on Trusts After Divorce,” that’s the subject of today’s ACTEC Trust & Estate Talk.

This is Margaret Van Houten of Des Moines, Iowa. Recent changes can have an enormous impact on existing trusts after divorce. To give us more information on this topic you will be hearing today from ACTEC Fellow Justin Miller of San Francisco. Welcome, Justin.

Thank you very much. As many of us are hopefully aware, we had what’s commonly referred to as the Tax Cuts and Jobs Act, and you could call it TCJA for short. And what it did was make some big changes that could really impact existing trusts that spouses may have created for each other, and the impact could happen if and when they were to ever get divorced.

What I am also going to talk about, if you stay until the end of the podcast, is a way trusts can actually be your friend in divorce. But first, I’m going to start with a little bit of background and where did these changes come from. At this point, everybody should be aware that the alimony rules have been repealed. This was the topic of a previous podcast and really, it only applies to a divorce or separation instruments entered into as of January 1, 2019 this year. So, if you’ve previously had a divorce or separation agreement in the past, you’re grandfathered in, unless you modify the agreement and expressly provide the new rules of ‘no more alimony’ deduction – expressly provide that that should apply. But what hasn’t been talked about as much, along with the alimony repeal, are the changes to Section 682, which basically repeals the TCJA repealed 682 effective January 1, 2019.

So, what does it really apply to? It applies to anyone or any taxpayers that have done trusts between spouses. So, these things have different names like Lifetime QTIPs or Spousal Lifetime Access Trusts. Often times these were done for estate or gift tax planning purposes. They might have been done as part of pre- or post-marital agreement planning to protect, let’s say, a closely-held family business. And these were done in the past but the problem is that these are technically what we would call grantor trusts. Grantor trust means whoever set up the trust has to pay the income taxes on the trust. The problem is, after divorce there is a question of whether or not they’re still considered grantor trusts. There are several sections in the tax code. The big one is 672(e)(1)(A), and what 672(e)(1)(A) deals with under the grantor trust rules is, it says that when a grantor sets up this trust, he or she is treated as holding any power or interest held by that grantor’s spouse at the time of the creation of such power or interest.

There are a couple of other sections in the code, such as 674(d), 677, that really look at not just whether the grantor had certain rights or powers over a trust, but whether the grantor’s spouse had certain interests, rights or powers. And the problem is, the code and the regulations aren’t clear about what happens after they get divorced. And in fact, the IRS and Treasury asked the question too in Notice 2018-37. And they basically said, “why would it still be a grantor trust after divorce just because they were spouses at the time they created the trust?” Now, this used to never be an issue. No one really cared about it because we had this special Section 682 that was repealed.

The reason we never cared before is because Section 682 simply said look, if you have a grantor trust and the spouses get a divorce, we are not going to make the grantor keep paying the taxes on that trust. That the former spouse who is the beneficiary, that person should be required to pay the taxes on whatever he or she receives. Section 682 made a lot of sense. It basically said, let’s just tax the person who’s actually getting the money after a divorce. But with the repeal of Section 682, we have a really awful situation where you have a grantor, a wealthy individual who might have set up the trust for their spouse 10,20,30 years ago. And if they get divorced, that grantor could be on the hook for all of the income taxes on that trust for the rest of his or her life, regardless of the fact that all of the income might be being paid out to that person’s former spouse, the grantor is on the hook.

Now, ACTEC has written some comments, two different ones (ACTEC Comments to Joint Committee on Taxation, House Ways and Means, and Senate Finance Committee re: Repeal of I.R.C. Section 682 and ACTEC Comments on Guidance in Connection with the Repeal of Section 682 (Notice 2018-37). One asking for sort of a legislative solution. Basically saying look, can we at least grandfather trusts that were in existence prior to 2019? And say look, this was the rule at the time, 682 applied, can’t we at least say that those trusts are safe and should get the benefit of 682? The ABA had Resolution 102a, starting with the family law section, it had help from some great individuals and the real property, trust and estate law section and taxation section, where it was asking for legislative solution to – well, first don’t repeal the alimony deduction and Section 682. But even if you are going to keep that repeal, at least grandfather pre-existing trusts. And by the way, can we also grandfather pre-existing premarital agreements and post marital agreements? And then, what ACTEC also did was it offered some comments on what we call Spousal Unity Rule, Section 672(e), saying look, can we just say that, yeah, it’s a grantor trust when you created the trust during marriage. But if the only thing that was really making it a grantor trust is the spouse’s interest and that person is no longer a spouse, can we go ahead and just say that it’s not a grantor trust anymore because they are no longer married?

So, we are hoping for some changes. But in the meantime, what do you do with these trusts that are out there? Well, there are some potential solutions. One, the grantor might be able to release certain interests or powers that could be triggering grantor trust status. That could be, let’s say, such as a Section 675 swap or substitute power. Maybe if the grantor releases that, it would no longer be a grantor trust. Maybe you could get rid of the spouse as a beneficiary; maybe you could amend the trust; maybe you might be allowed to decant the trust, depending on the trust agreement or state law. The third solution — maybe you just want to dissolve the trust altogether and just give the spouse whatever is left in that trust. And the last solution is, maybe after the divorce you want to keep the spouse as a beneficiary — keep the trust going. But you’re going to have some kind of agreement that that spouse beneficiary has to reimburse the grantor for the taxes that that grantor has to pay as long as the laws are the way they are.

How Can Trust be Your Friend in a Divorce?

So that’s what’s going on there, but I did promise you another creative solution. And that is, how can trusts be your friend in a divorce? So, we already know the alimony rules went away — no deduction. We know Section 682 went away. So, we can’t have spousal trusts created during divorce taxed to the former spouse, but what about using non-grantor trusts as part of the divorce process. There are two great code sections in the divorce that allow you to transfer assets income tax free and gift tax free. Those two Sections are 1041, for income tax purposes, and Section 2516 for gift tax purposes. And the transfer doesn’t have to happen before the divorce or as part of the divorce; it can happen after the divorce.

And what that means is theoretically, you could agree to create a trust after your divorce. It’s still income tax free. It’s gift tax free. It’s going to be pursuant to a written marital settlement agreement. And by creating that non-grantor trust, what that means is we don’t have to worry about the alimony rules or the grantor trust rules or Section 682. You are basically creating a non-grantor trust under the regular Subchapter J Rules. I teach a 10 week LL.M. course covering the non-grantor and grantor trust rules, but to put it simply, by creating a non-grantor trust, the grantor will not be on the hook for the taxes of that trust, and all of the income that the non-grantor trust generates, that is actually distributed to that former spouse, the former spouse will pay taxes on it just in accordance with the normal Subchapter J Rules. We don’t have to worry about the income tax on the transfer 1041. We don’t have to worry about the gift tax issues under 2516. We don’t have to worry about the repeal of Section 682 and the alimony rules. And the reason why it’s kind of a way around alimony is the grantor setting it up does not get a deduction. It’s not like an alimony deduction. But because the income that that trust generates is taxed directly to the former spouse, the grantor doesn’t have to pay taxes in the first place, which means the grantor doesn’t actually need the deduction. So that’s just one creative solution you can consider and hopefully we can have some resolution, at least grandfathering pre-existing trusts, let alone pre-existing premarital agreements and post-marital agreements. And with that, thank you for your time.

Thank you, Justin. Thank you for educating us on tax reform’s impact on trusts after divorce.