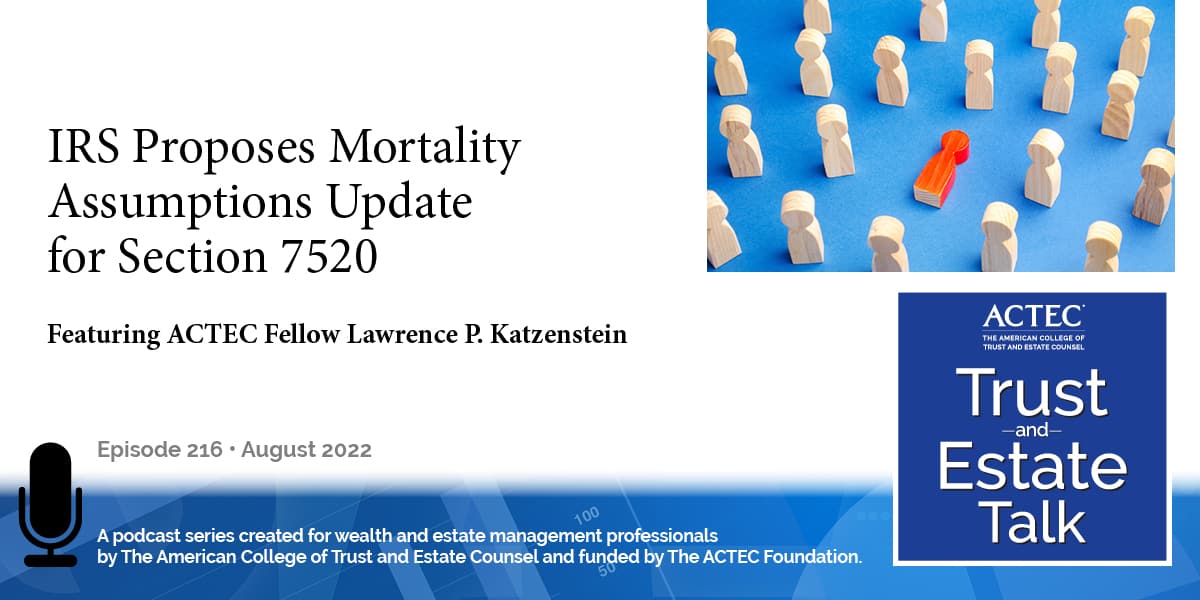 “The IRS Reviews Updates to Mortality Assumptions in Code Section 7520,” that’s the subject of today’s ACTEC Trust and Estate Talk.

This is Lois Ann Stanton, ACTEC Fellow from Austin, Texas. What are the implications for planners of the proposed new mortality tables under Section 7520? Are there actions clients should be taking now even before the final regulations are issued? ACTEC Fellow Larry Katzenstein from St. Louis, Missouri, will discuss these matters with us today. Welcome, Larry.

Thank you, Lois Ann. Well, as I’m sure many of you already know, the IRS has finally issued proposed regulations under Section 7520 updating the mortality assumptions that underlie so many of the estate planning techniques that we use. Section 7520 was enacted in 1989 and it requires that every 10 years the IRS update the mortality assumptions, based on the most recent mortality data available. And that has always been based before and this time too on the most recent census. (IRS Actuarial Tables)

That was done in 1999 on May 1, in 2000, in 2010, and we expected it to be right on time on May 1, 2019, as well. That didn’t happen because the Centers for Disease Control – which actually is the bureau that massages the census data – did not get their work done. And so, the IRS really wanted to stick with that census mortality data as the basis of the mortality tables and so it wasn’t until now that we have proposed regulations updating the mortality assumptions. And one thing you notice when you look at the assumptions is people live much longer than they did under the old tables.

The mortality table is simply a table showing the number of lives starting with 100,000 people at age 0, then running out at age 110 with no lives left, and – at every age between 0 and 110 – the table shows how many people are still living. So, just to give you an example of the dramatic increase in longevity, at age 84 under the prior table there were 37,837 lives still left. Under the new table, there are 44,808 – or an increase of 6,971. That’s a remarkable increase in mortality. Another example that I think is really telling.

Under the new table, the probability of surviving from age 60 to age 90 went from 21% to 26.6% in just 10 years. Now, this has a number of implications that we’ll talk about, but first of all, you’ll notice a couple of things that are different in the new tables. First of all, the new tables now have decimal points. So, for example, whereas the old table may have shown the age at 84 as 44,809, the new table shows 44,808.51. And that does produce more accuracy, especially at lower interest rates. Another thing that you’ll find is that the regulations this time do not actually include the tables themselves.

The code requires either that they include tables in the regulations or that they include formulas. The tables are all available online now. You won’t find the IRS having to publish these big telephone directory-sized books of factors anymore. And so instead, the IRS has put formulas in the tables. You won’t find these formulas in the regulations very helpful. I think most people who are not mathematicians or have spent the time to learn what they mean will not find them very useful, but that’s why they’re there.

When to Use Old and New Mortality Assumptions

You will no longer be able to go back. Now when would you want to use the old mortality assumptions and when would you want to use the new ones? Well, let’s talk about Charitable Remainder Trusts, for example. If someone is considering doing a Charitable Remainder Trust now, they should get it done before the new tables are effective because people live less long under the old tables and therefore the remainder is worth more and the charitable deduction is more when you create a charitable remainder trust. That’s a really prime example of where you want to get something done quickly if you are going to be creating a charitable remainder trust.

As with a Charitable Remainder Trust, the charitable deduction for a donor creating a charitable gift annuity is higher under the present tables. The retained annuity is worth less than will be under the new tables. On the other hand, the amount of each annuity payment that is taxable is greater under the current mortality table.

There are a couple of interesting aspects about this effective date. I think there’s a good argument – and I’m sure someone will litigate it if the final regulations are not changed to reflect this – I think there’s a good argument that taxpayers have to be able to use the new tables if they want to for any transaction that occurred on or after May 1, 2019. The statute seems to mandate that every 10 years the IRS will change the mortality assumptions and there was no law that said they have to use the census data. They could have used other data from insurance company data or other places they could get data.

So, I think that the final regulations it’s possible may let taxpayers go back to 2019. We’ll see whether that happens. That has been suggested in comments on the regulations. One other thing that’s interesting about the Unitrust payments. If you have a Unitrust, which pays more frequently than annually, or if there’s a gap between the valuation date and payment date, then you’re required to make a table F adjustment and that results in an odd number. It no longer will be a payout rate of 6.2% or 6.4%. It may be 6.356%. And the regulations have always said in that case that you interpolate between those two numbers.

They never said in the original regulations you can do it by an exact method because before computers there was no way to do it by an exact method. But the regulations as proposed, say the taxpayers can choose either to use the exact method – which you would probably need a computer to do in most cases – or you could do it using this old interpolated method. What they didn’t tell you – and I think this is interesting – is that you will always get a slightly higher deduction when you create a Unitrust with the current interpolated method.

So, I’m not sure who is ever going to use the exact method when creating a Charitable Remainder Trust because they’ll want a higher deduction. Then later, if they want to give away the remaining Unitrust life income interest, they will have to be consistent. If they used one method when they calculated the gift for deduction purposes, they have to use the same method when they give away the remaining life income interest. There was a little glitch that they will probably fix. We are used to, from all the prior regulations, rounding to three places when doing the adjusted payout rate for a Unitrust. In one of the examples in the proposed regulations, they round it to four places.

I think that may have been inadvertent and I suspect they will fix that so that they tell us, “always use three places” or “always use four places” and that kind of little thing can make a difference. In a rare case, it may make a difference in whether you pass the 10% test which is required under Section 7520 to have a qualifying Charitable Remainder Unitrust.

So, that’s a brief overview of the new 7520 regulations. I guess we will probably see final regulations in the next 30 to 60 days. Maybe I’m being optimistic. There were very few comments received after the regulations were issued. So, standby for the final regulations and we’ll see whether some of my predictions are correct. Thank you, Lois Ann.

Thank you, Larry, for explaining these new mortality tables and just how the numbers work.