Estate Planning Opportunities in a Time of Rising Interest Rates 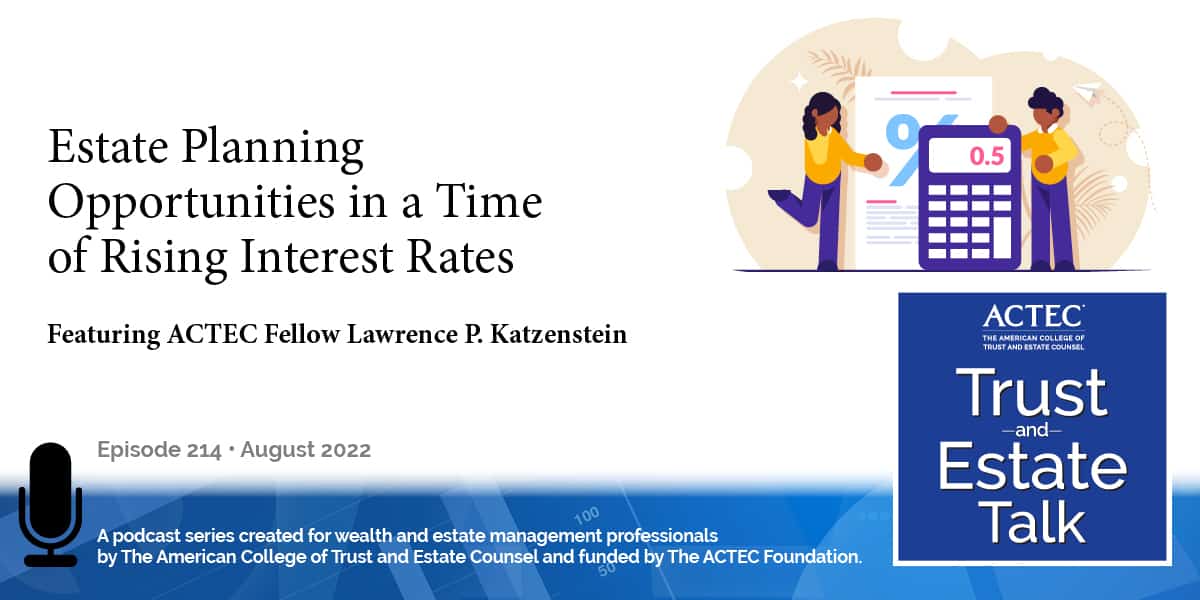 “Estate Planning Opportunities at a Time of Rising Interest Rates,” that’s the subject of today’s ACTEC Trust and Estate Talk.

Thank you. As Lois Ann said, we are in a time of rising interest rates, but I think one thing to keep in mind is that the rates are still relatively low compared to where they have been historically. For example, Section 7520 became effective on May 1, 1989 and that’s the section, of course, that says every month we have to take a new interest rate and use that when we compute things and if it’s a charitable interest, we can go back for two months before that, but every month the interest rate changes. And, if you go back and look over interest rates for most of that period, they were much higher than they are now.

For example, people forget that in 1989, the Section 7520 rate actually was 11.6% and for most of the 10 or 15 years after that they were often in the 8% range or 7% range. So, when we get down to a range of 3.6, or 3.8, which is about where we are now, rates are still relatively low by historical standards. And so, those rates, as we know, are going up.  So one of the techniques, it seems to me, is still to do the things that we have been doing before, recognizing that rates are still relatively low. And, with many of these techniques, such as GRATs or a charitable lead annuity trust, the benefit of the technique is to have the investments grow faster than the interest rate. If we zero out a GRAT, for example, using a certain interest rate, what we have to do to have the GRAT perform well at the end, is to do better than that Section 7520 rate. And 3.6 or 3.8 over a period of time is still a fairly easy thing to do in many cases.

The value of an income interest is less because, obviously, if I’m assuming a 3% interest rate, then that’s what I’m presumed to be earning, and the remainder will therefore be more. Now, the economic benefits of GRATs and CLATs and so forth, are exactly what they were before, except now interest rates are a little bit higher. But here’s one key planning pointer though with respect to GRATs – if we expect interest rates to rise, locking in that current relatively low-interest rate in a longer-term GRAT may make sense.

You know, the rolling sequential GRATs we’ve all been doing before may not make much sense if, in two years when the time to roll over to the next GRAT occurs, we won’t get the benefit of the same low-interest rate. Well, the mortality risk of a longer-term GRAT is a problem, but that can be hedged to some extent by creating GRATs with several different terms. For example, a three-, a five-, and a seven-year GRAT. Longer-term GRATs also require smaller annuity payments. And, if the grantor should die when interest rates have risen, less than the entire GRAT may even be includable in the grantor’s estate.

That’s something that’s easy to forget. For example, suppose I had created a 20-year, $10 million, non-graduated GRAT at a time when the Section 7520 rate was 0.4%. The zeroed out non-graduated GRAT amount is $521,265. That’s the amount you would have to pay every year in that zeroed-out GRAT. Now, let’s suppose I’ve done a longer-term GRAT and I die in 15 years at a time when the Section 7520 rate has risen to 7%.  If you use that inclusion formula within the Section 2031 Regulations, that tells you how to compute how much of that GRAT is in your estate, the amount included in the estate is only 7.4 million dollars, no matter how large the trust has grown. So, there’s another thing to think about in doing a GRAT that’s a little bit longer, especially for younger clients that are expected to survive the period of the GRAT.

One other thing to remember, without all of these planning techniques, is that a Unitrust is basically unaffected by interest rates. And the reason for that is, think of it this way – if I’m entitled to, for example, 5% of the fair market value of a trust annually, which is what a Unitrust is, then whether the trust doubles in value or shrinks in value, I’m going to have an interest that either rises or falls exactly in sync with the remainder interest.

Unitrust and Opportunities of Rising Rates

And what you’re really measuring in a Unitrust is not an absolute value of the remainder – what you’re measuring is the relative size of the income interest, the remainder interest.  And if the trust doubles in value, they will both be worth twice as much. So, with a Unitrust, there’s almost no effect from interest rates, except there’s a little adjustment you have to make if the payments are made more frequently than annually or if there is a gap between the valuation date and the payment date.  But that’s a very small adjustment, and it has very little effect on the value of the interest.

Another thing to remember is that asset values now are depressed, and so an obvious strategy is to make these gifts now before the market recovers, which I think everyone knows it will at some point.  Values are low now, so that’s always the best time to make gifts. It’s a good time to sell depressed assets to family members.

A few other things to just think about in connection with gifts when interest rates are as low as they are now, and one of the ones that I think is underutilized in the charitable area is a gift of a remainder interest in a personal residence. If someone is planning to leave a portion of an estate to charity anyways at death, why not have the client deed the house to the charity now,  and retain in the deed the right to live in the house for the rest of their life? Then, when they die, the house will pass to charity. It won’t be the responsibility of family members to sell the house and you’ll get an immediate large income tax deduction when you actually deliver that deed to the charity.

And so that is another gift that I think is really worth thinking about now for clients that are planning to leave a gift to charity anyway at death. Why not do it now in a way that gets an income tax deduction for the gift of that remainder of the residence? And with that, I think I’ve finished my time and it’s been a pleasure talking to all of you.

Thank you so much, Larry, for sharing your insights on all these opportunities that are available for planners and their clients during this rising interest rate environment.