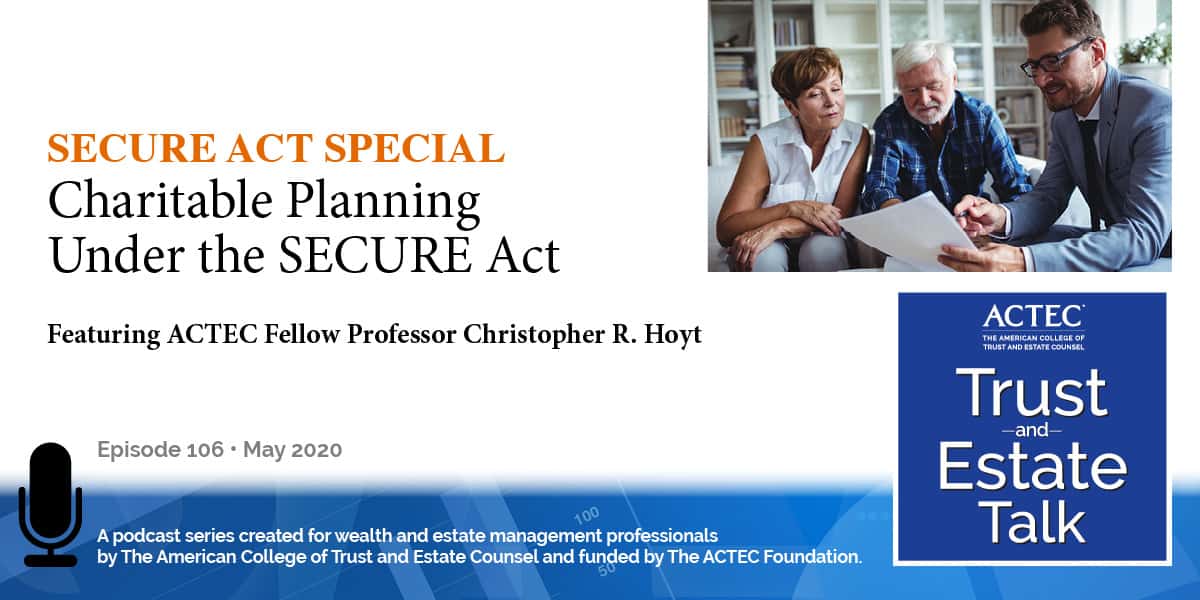 Welcome to our final segment of a five-part series offering professionals information on the SECURE Act, which was signed into law in December 2019. SECURE stands for Setting Every Community Up for Retirement Enhancement Act. Visit actec.org/secure-act to find additional resources. “Charitable Planning and the SECURE Act,” that’s the subject of today’s ACTEC Trust and Estate Talk.

This is Susan Snyder, ACTEC Fellow from Chicago. Setting Every Community Up for Retirement Enhancement Act, or SECURE Act was signed into law in December 2019. Today’s podcast will discuss charitable planning tools, charitable remainder trusts, charitable giving, and possible tax traps for IRAs under the SECURE Act. To give us more information on this topic, you will be hearing today from ACTEC Fellow Professor Christopher Hoyt, of Kansas City, Missouri. Welcome, Chris.

Well, thank you very much. Building on the employee benefits retirement plan accounts, these retirement plan accounts are loaded with taxable income, and when the children inherit them they pay income tax, and so two observations. The first one is that if you are going to make a charitable bequest, the best asset to give to charity is the stuff that has taxable income and give that to charity. They don’t pay income tax. They’ll keep all of it. And the other assets, where you have a step-up in basis, will be good for the children.

Another planning tool, though, is the Charitable Remainder Trust (CRT). And one concept is, that was pointed out earlier, when a million dollars in a retirement plan account is paid to a trust, the trust is going to pay that highest income tax rate of 37 percent, so that your $1 million IRA shrinks to $600,000. But you can name a charitable remainder trust as the beneficiary of the term plan account. The million dollars leaves the IRA to the CRT and no income tax is paid, and now the charity is going to get the million dollars but before it does, the child will get income for the rest of their life based on a million dollars worth of assets rather than just $600,000. So for that spendthrift child where you are thinking I’ll have to pay that high tax rate, maybe a good arrangement is to leave the entire retirement account to a charitable remainder trust that will dole out, for the rest of their life, a steady stream of income. But what I really want to talk about here is the tax trap for lifetime gifts from IRAs; and the bottom line is, if you ever think that you ever want to use your IRA for charitable giving at any point for the rest of your life, then you should never make a tax-deductible contribution to an IRA after the age of 70 1/2. Now under the old law, a person who was still working – you have to work to put money in an IRA and deduct it – a person who is still working could not make a tax-deductible contribution to their IRA. And the new law now allows working people over the age of 70 1/2 to make tax-deductible contributions, but it comes with a tax trap. And basically the tax trap is, if a person ever uses the IRA for charitable giving for the rest of their life, they will recapture those tax-deductible contributions that they made to their IRA after age 70 1/2.

So, a little bit of background, the 2017 Tax Act made it really hard to itemize your deductions. The number of returns that itemized fell from 30 percent down to 11 percent. So, many seniors switched their charitable giving from writing a check to using their IRA. And, a simple example, we have a man who has to take out $10,000 from his IRA – that is his minimum distribution – says send a check to charity for $4,000; send a check to me for $6,000. On the Form 1040, with IRA distributions, there are two lines. One line says total distributions; puts down $10,000—no penalty because the minimum was taken out. The second line says taxable distributions, and he puts down $6,000 because 4,000 went to charity. And then, there are three letters—QCD, stands for Qualified Charitable Distribution, that tells the IRS why he is not paying tax on all ten; it is because four went to charity. Another example we are going to build on, there is a woman who has to take out $5,000 every year from her IRA, and she has a check cut straight from her IRA to a charity for $5,000. She will put down total distributions $5,000, taxable, zero, QCD. So, this law applies to people over the age of 70 1/2, and this charitable giving law is still age 70 1/2. It has not been increased to age 72.

There are basically six requirements to be able to make a tax-free distribution from an IRA to charity. The first is, you are over the age of 70 1/2. The second is, this only applies to IRAs; it does not apply to 401(k) plans or 403(b) plans. The third requirement is that the check from the IRA is made directly to the charity; and what this means is that the check is issued in the name of the charity. So, many brokerage houses don’t want to have to cut checks from IRAs and they will issue to their IRA account owners an IRA checkbook. And every time somebody writes a check that is a distribution, and that’s a cool way to do this, is you just take your IRA checkbook, you write your checks to your charities, and they could be small amounts—$100, $50, and you are using their IRA for charitable giving. At the end of the year, you give your checkbook to your accountant and they tabulate the total distributions and the totals that went to charity, and the tax return should be more accurate. So, the third requirement is made directly from the IRA to the charity, which means the check is issued in the name of charity. Fourth, that every public charity qualifies; except there are three that don’t qualify for this law. The first is a private foundation that makes grants, if you have a family foundation. The second is a donor advised fund is not eligible for this law; and the third is a supporting organization, the friends of the hospital and the like are not eligible. Fifth requirement is there can’t be any personal benefit to the donor that would reduce the charitable gift. You can’t use this to buy dinner tickets at fundraisers where there is a meal served or seats at an athletic event. And finally, the IRA account owner has to receive a letter from the charity. The normal letter that says, you receive no goods or services.  It does not have to say it is from your IRA; it just says you receive no goods or services. You can deduct the entire amount and then, when you do that you could exclude all the gifts.

So here is how the SECURE Act changed that. It said that if a person ever, after the age of 70 ½, makes a tax-deductible contribution to their IRA, then their ability to use this law to make charitable gifts from their IRAs is reduced dollar for dollar, for every deduction they ever took—every dollar ever deducted that was put into the IRA. So, let’s take the woman who is giving away 5,000 a year to charity straight from her IRA, and this year she deducts $7,000. She puts $7,000 into her IRA and deducts it. For most people at $6,000—once you are over the age of 49, you are allowed to have a catch-up contribution of 1,000. So, she puts in the full $7,000. Well, this year she deducts $7,000 going to her IRA. She has a check cut from the IRA to the charity for $5,000. So, on her IRA distribution line, she reports $5,000 total distributions and $5,000 taxable. She can’t use this QCD law, because she took a tax deduction of $7,000. Then, she makes a contribution, next year, of another $5,000. So, the first $2,000 will be taxable; $3,000 qualifies for the exclusion. Now of the $7,000 where it was taxable, and so she will put down total distributions $5,000 taxable to QCD for the three. For the $7,000 that does not qualify for this QCD, she can try to take an itemized deduction, but that is the whole point is seniors don’t itemize. They have paid out the home mortgage. The most state and local taxes they can deduct is $10,000. On a married-joint return, the standard deduction for seniors will be $27,000. So, they really want to use their IRAs.

So, the bottom line is, if you or a family member or a friend is excited about putting money into an IRA and deducting the $7,000, just warn them, if you ever do, for the rest of your life your ability to give to charity from an IRA has been restricted. So, thank you very much.