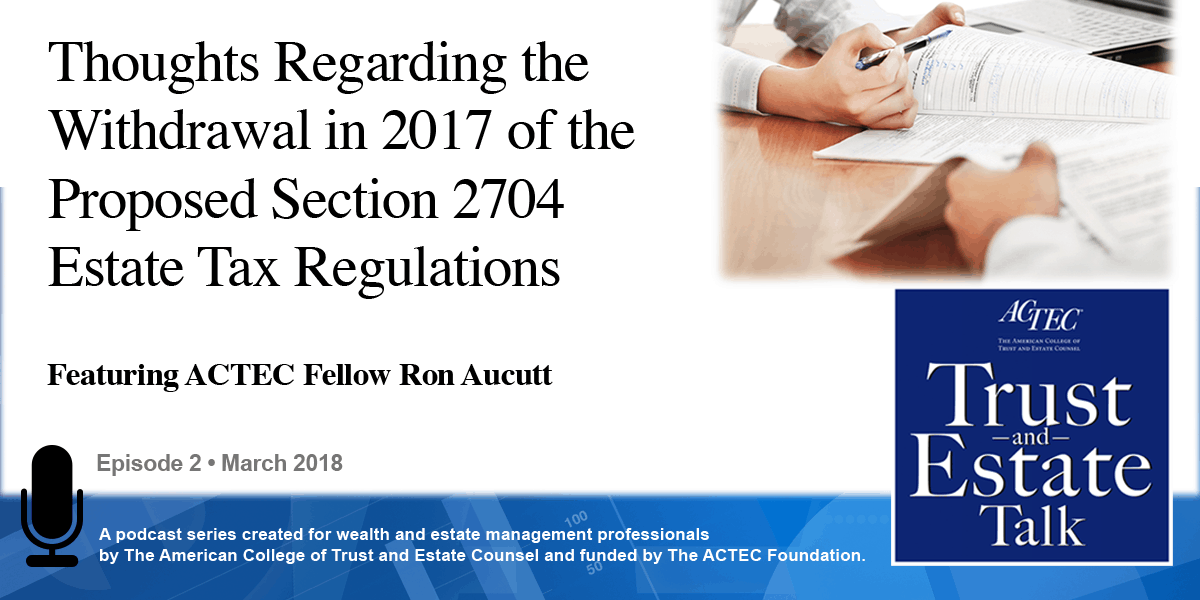 Ron Aucutt, ACTEC Fellow from Tysons Corner, Virginia shared his perspective in October 2017 of Treasury’s withdrawal of Section 2704 proposed regulations on valuation for transfer tax purposes. There are many valuable insights in this podcast as a revised set of regulations may yet be reproposed as some point by Treasury.

“Treasury’s Section 2704 Proposed Regulations and Their Withdrawal,” that’s the subject on this ACTEC Trust and Estate podcast on October 21, 2017.

Thank you Susan.  These proposed regulations that were proposed in August of 2016 would provide that certain restrictions would be disregarded beyond what the statute already does, Section 2704. Treasury and the IRS were trying to eliminate the artificial effect of artificial discounts, resulting from artificial provisions in governing documents, basically. They defined the new category of disregarded restrictions as a provision of the governing document that limits the ability of the holder of the interest to compel liquidation or redemption of that interest on no more than 6 months’ notice for cash or property equal to at least minimum value. And minimum value is defined basically as the interest’s pro rata share of the net fair of the market value of the assets of the entity.

The regulations became very controversial. In fact, they were being criticized even before they were published. I think partly for that reason, many of the criticisms went much farther than I would have, and I have a different view than many of the people who commented on these proposed regulations and who likely are now celebrating their withdrawal. I think that these criticisms come from a very broad view of the effect of disregarding a restriction that would go something like this: a provision that restricts redemption on 6 months’ notice is disregarded, right? So, anything that prevents redemption on 6 months’ notice is disregarded, so we must assume that nothing prevents such redemption. In other words, assume redemption is always permitted and every interest in the entity has to be valued as if the owner had a right to redeem on 6 months’ notice. And this has got to be called a so-called “deemed put right” and was the basis for most folks’ criticism of the proposed regulations and certainly the theme of almost all of the unprecedented 36 speakers that spoke last December at the public hearing:  mostly, owners of small family-owned businesses, or their representatives, and representatives of the appraisal community.

Now, my view has always been that minimum value is merely just a way of identifying what’s disregarded, and once a restriction, which is a provision in a document, is disregarded, then the appraisal will proceed just as if that provision wasn’t there. And, as the regulations themselves confirm, value will be determined under generally applicable valuation principles, as if the disregarded restriction does not exist. Lots of factors that would still support discounts, if relevant, would be the risk, for example, if the holder of the interest might just be unable to negotiate a favorable buyout, even if it is not expressly prohibited in the governing document. In the case of an operating business, which I thought these proposed regulations would have very little, if any, effect on, there’s a business plan, there’s a business environment, competition, illiquidity, the need for capital, unpredictability– all kinds of other obstacles to the business’s redemption of a part of the business, in effect, by redeeming the interest of one of the owners.

Now, the drafters of the regulations, of course, I think bear part of the blame for all of this confusion. They used an expression like “disregarded restrictions” which was exactly the same thing that they had included in a request for additional congressional authority in their legislative proposals in 2009, ‘10, ‘11, and ‘12. But they backed off of that request for legislative cover and I think many assume were going to continue to try to continue without legislative cover which really annoys folks, especially owners of small family-owned businesses. They use the term “minimum value” as a standard for the definition of disregarded restrictions, but by minimum value they really didn’t mean minimum value for transfer tax purposes which is really extremely subtle point, and it got them in trouble.

Well, April 21, 2017, the President issued an Executive Order #13789, directing Treasury within 60 days to identify tax regulations issued this year or since the beginning of 2016 that either 1) impose an undue financial burden, or 2) add undue complexity or, 3) exceed statutory authority. Treasury then had to recommend specific actions by a date in September and finish those actions by March of 2018 or file an interim report explaining why.

On June 22, Treasury responded with its first report identifying eight regulations that is said seemed to meet least that one of two criteria in the executive order, that is undue financial burden or undue complexity; they did not admit that anything met the third criteria of exceeding statutory authority. Well, one of those eight was the proposed section 2704 regulations, and here’s what the Notice 2017-38 published in June said, “Commenters expressed concern that the proposed regulations would eliminate or restrict common discounts, such as minority discounts and discounts for lack of marketability, which would result in increased valuations and transfer tax liability that would increase financial burdens.” Commenters were also concerned that the proposed regulations would make valuations more difficult and that the proposed narrowing of existing regulatory exceptions was arbitrary and capricious. And believe me, I was there at the December hearing, and that was exactly what the commenters said.

Then we have the second report from Treasury that you referred to, Susan; that came out on October 4, was dated October 2, released on October 4, 2017. It summarized the comments, again including criticism that all law is disregarded–this is the very broad view that I described earlier–and then said two sentences that are critical: After reviewing these comments Treasury and the IRS now believe that the proposed regulations approached to the problem of artificial valuation discounts is unworkable. In light of these concerns, Treasury and the IRS currently believe that these proposed regulations should be withdrawn in their entirety. This report did not withdraw the regulations but we’re expecting any time that there will be in the Federal Register that formally withdraws the regulations in their entirety, and that might be the end of it. There’s no reference in the report to modifications unlike the discussion of all of the other seven regulations, by the way, which do discuss potential modifications that might be made to the regulations to make them less burdensome or less complicated. But neither is the door closed to re-proposing these regulations or other regulations to address this issue of artificial restrictions that produce artificial discounts that they were trying to get after in the first place.

If they can figure out a way to solve the problems, and remember they said in the report it is the approach that they have found unworkable; they won’t be able to just make tweaks, they’re going to have to find a different approach and make fundamental changes; we may very well see this proposed again. And if these regulations, or regulations that achieved the same objective are proposed again and become final, that could be bad news for some folks who, for example, use family-limited partnerships or LLCs for simply investment portfolios, not active businesses for sure. But, on the other hand, I think this could also be good news if it is a step in a process that I encourage that would make valuation more objective, more based on regulations and not, for example, on fact-specific and sometimes even judge-specific case law that is so much less predictable and has produced so much consternation recently.

As with any other development that depends on our friends in the government to come up with a proposed alternative though, we don’t know, they probably don’t know exactly which direction they want to go. After the dust has settled a little bit, they come back and take another view of this, they might give us some hints, or it might be months or even years before we hear about this before we find out finally where this project is going to end up. For now though, I know a lot of people are celebrating that the proposed regulations are dead. Well, one of the reasons we have notice and comment with regulations is so that Treasury and the IRS hear from taxpayers what the burdens are and what the practicalities are in implementing any tax rules are in their individual situations. Treasury asked for that; they got that comment; that’s the way this system is supposed to work, and overall that’s probably good for the rule of law in this country.

Thanks Ron for giving us an update on 2704 and treasury.