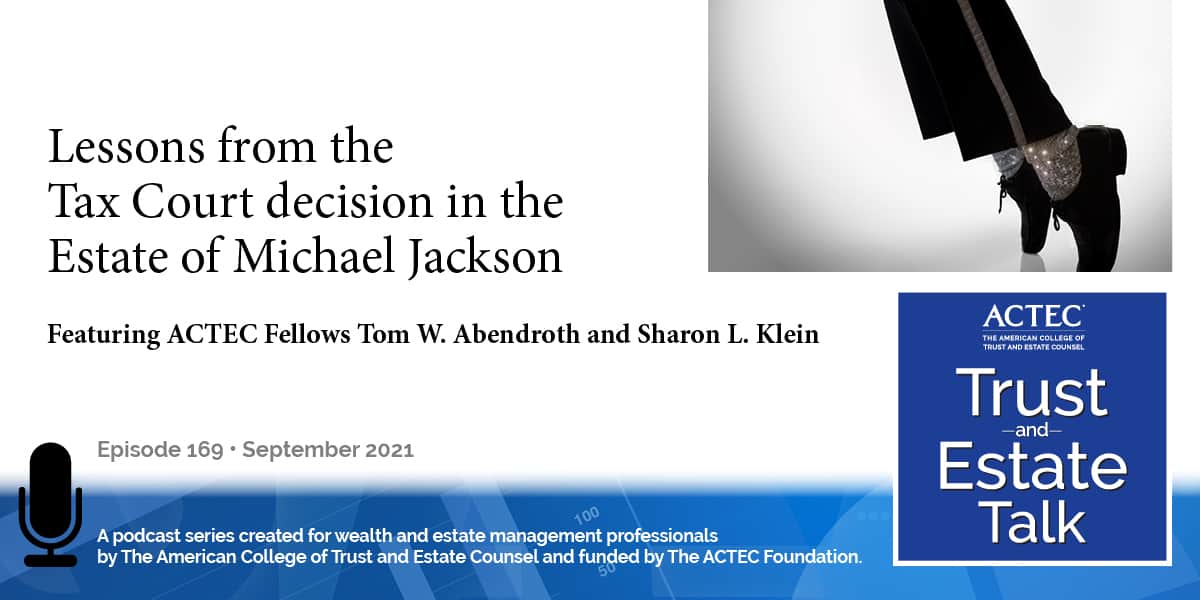 “Lessons from the Tax Court Decision in the Estate of Michael Jackson,” that’s the subject of today’s ACTEC Trust and Estate Talk.

About half the states in the U.S. have the postmortem right of publicity. In terms of what triggers that right, several states statutes only protect celebrities; others protect all individuals regardless of celebrity status; some states require that name, image, or likeness has commercial value either during lifetime or at death; while other states do not have that requirement. And the number of years the postmortem right of publicity protects an individual’s persona also varies widely among the states, ranging from ten years to a hundred years after death.

Why? Well, the value of the gross estate includes the value at the time of death of all property, real or personal, tangible or intangible. And if an image or likeness is an intangible right that transfers at death, it will likely be included in the gross estate whether or not heirs are planning to exploit that right.

How significant an issue is this? Well, in the Michael Jackson case, the estate initially valued his right of publicity at about $2,000 on his estate tax return, and the IRS initially came back on audit with a value of about $435 million. So, you could see the divide that can be created. And in a great victory to the estate, the court found that Jackson’s name and likeness should be valued at about $4 million. Jackson was domiciled in California, of course, which has a separate postmortem right of publicity statute, and that was the statute at issue in that case.

Although the business of exploiting Michael Jackson was a spectacularly successful one after Jackson’s death, the crux of the court decision was really determining the value of Jackson’s name and image as of his date of death without ascribing value based on post-death evidence that wasn’t reasonably foreseeable at his time of death. Now, apart from the fact that the IRS appraiser perjured himself, so his credibility suffered greatly at trial and that actually permeated the whole decision, the court pointed out that Jackson’s reputation was actually in tatters when he died because of the child abuse allegations and that he had earned almost nothing in the years before his death because nobody wanted to be associated with his tarnished image. And the court found that the incredible post-death business success was just not foreseeable.

So, what are some of the lessons we could learn from that case? First and interestingly, the court noted how hard it is to value any asset that requires active management because it’s so difficult to distinguish between the value of the asset and the value of the management. As the judge pointed out, when the assets were no longer under Jackson’s control, they were managed, and these are the judge’s words, “with stunningly greater competence than they had been in Jackson’s own hands.”

So, Michael Jackson is an extreme case, but there are probably arguments to be had about why the value of an individual’s postmortem right of publicity should be reduced despite post-death success because success after death, one might argue, was at least partly attributable to management after death as opposed to value on the date of death. Next, in terms of managing postmortem publicity rights, just as individuals are now increasingly naming specialty advisors in the dispositive document to manage assets like business assets, or digital property, or artwork, it may be prudent to name a publicity rights advisor who has particular expertise in this area in order to maximize the value to heirs and also reduce potential conflicts among beneficiaries.

Next, in the premarital context, the right of publicity should probably be considered an asset and reflected in marital agreements. Next lesson, the IRS couldn’t avail themselves of the so-called synergist arguments that they advanced, which is that by bundling different rights together, the sum of the whole is more valuable than if you assessed rights separately. And the court actually acknowledged that it would be entirely reasonable to think that a collection of related intellectual property rights like copyrights in music, recordings, images, might be more valuable if they could be packaged and sold together, but the IRS had agreed to the values in the Jackson Estate by stipulation except the three that went to trial. And the court said it would not allow the IRS to renege on its stipulation and cram the value of the stipulated assets into the value of the assets at issue, because that would undermine the stipulation.

So, in the future, it might behoove estate representatives to agree to asset valuation as much as possible in advance in order to undercut the synergies argument. And finally, just like in the business context, having a qualified appraisal to support your valuation will likely be key. And so, with that, I’m going to turn it over to Tom to talk about how we might plan to minimize the value of that asset at death. Tom?

Publicity Rights as an Estate Asset

Thank you, Sharon. So, with the right of publicity, as Sharon alluded to, we’re talking about an asset that in the world of estate planning is relatively new. The Estate of Michael Jackson case is really only the second that addresses in any way, the right of publicity as an estate asset. We have nothing approaching a body of law or precedent on how it is treated, valued during life or at death, no well-established guidance on how to transfer it, and wide variations in state law as Sharon described.

Fortunately, what we do have is a good set of well-established techniques for transfer tax planning with business interests, and that provides an excellent guide in this area. And it reinforces that we should view the right of publicity and related rights and revenue streams as a business asset. Most successful artists, athletes, and celebrities do just that. But before we get into the tax planning, the first step here is really to start with asking the client, what do they want? How do they want the business of commercialization of their name and likeness to be carried on? Who do they want in charge? It’s a complex asset requiring active management, as Sharon said, and this is another reason to have a solid business structure around it.

Now on this question of what does the client want, there is a very interesting side question, and that is what if the client wants to restrict the future use of the asset? Can they? Well, from a property law standpoint, that certainly should be achievable as part of the estate plan, but there is this lingering question out there, for which we do not have an answer, of whether that restriction will limit the estate tax value. Of course, value is value at the moment of death. Can the client’s instructions not to commercialize, or only to commercialize in certain limited ways, impact that value? Certainly, we can expect the IRS to argue it doesn’t in the right circumstance.

Now, for the planning. First, Sharon mentioned the synergy argument in the Michael Jackson case. So, in creating or modifying an existing business structure as part of the estate planning, an important thing to consider is keeping the lines of business separate in order to avoid the synergy argument. One entity, for example, holding the right of publicity and trademarks. Another entity acting as the commercialization and management entity.  Maybe a third, depending on the nature of your client and their business, holding the music portfolio, or works in progress, or memorabilia. This segregation, and creating differences in the ownership for each entity, will help reduce value by avoiding this synergy argument.

And then, it really comes down to using the same techniques used for business interests, the ones we all use on a regular basis: grantor trusts, gifts and sales for a note, valuation discounts. As part of this, be sensitive to the personal services aspect of the right of publicity. A review of the income tax cases, and there are quite a few out there related to endorsement deal income, shows that the IRS pushes for personal service income treatment rather than treating the income as royalties or license fees.

So, first clearly, a portion of the value from these kinds of contracts, maybe a significant portion, should not survive the clients. And that should impact the value of the right of publicity because, by the IRS’ own point of view, it’s personal service income. The client needs to get that income during life to consider assignment of income issues, and fortunately for, I think, most people in this area who have a valuable right of publicity, they need that income and they’re usually pretty good at spending it.

Finally, being a business, I think should reduce any argument from the IRS that they’re going to apply a Powell type analysis and say 2036 applies. I think this is an area where there is a tremendously good argument that you have significant non-tax business purpose to the entities that you’re creating or using to transfer value. And I think in conclusion, it’s important that we think about keeping flexibility because the law will develop, and as it does, we will learn more and we’ll need to modify these structures. So, this is really an area where we, like our clients who have significant right of publicity value, get to be creative. Thank you.

Thank you, Sharon and Tom, for sharing these highlights of the Michael Jackson case and the lessons learned regarding right of publicity planning.