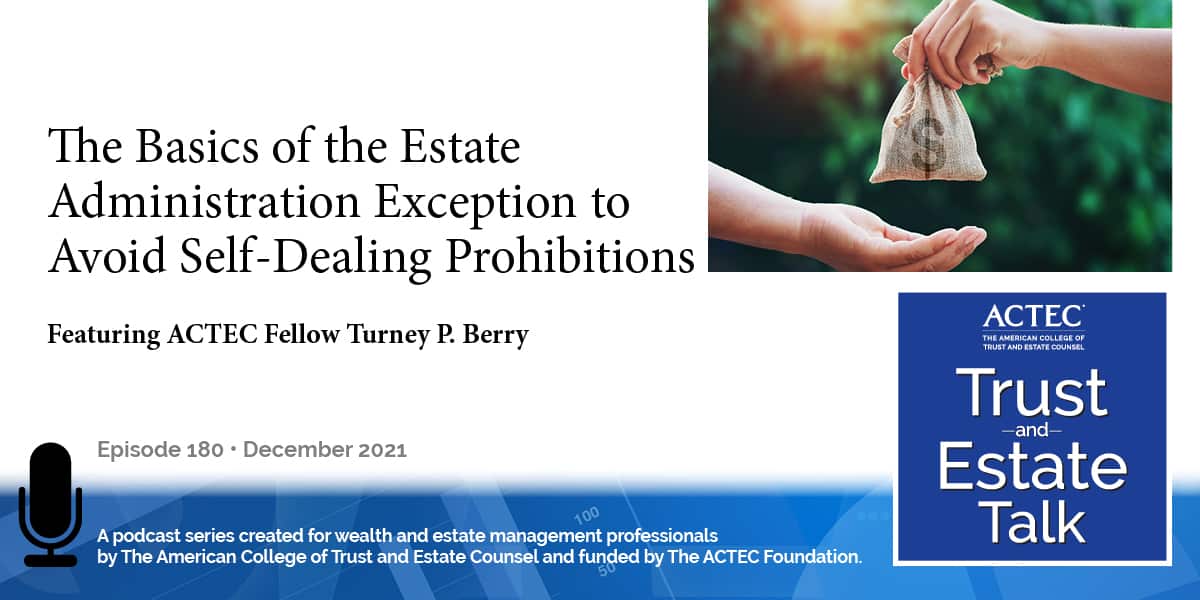 “The Basics of the Estate Administration Exception to Avoid Self-Dealing Prohibition,” that’s the subject of today’s ACTEC Trust and Estate Talk.

This is Stacy Singer, an ACTEC Fellow from Chicago, Illinois. There are general rules concerning transactions between a foundation and a donor that prohibit self-dealing. ACTEC Fellow Turney Berry from Louisville, Kentucky is joining us today to explain the rules, probate and estate administration exceptions, and more.

Thanks so much, Stacy. As I think every ACTEC Fellow knows, whenever you have a family foundation or a private foundation there are a vast number of rules that, as a general matter, limit interaction between disqualified persons (family members and that sort of thing for the most part) of the primary donors, not allowing them to buy, sell, lease or have financial interaction with the foundation. And there are various exceptions, et cetera, that we’re not going to go into today. But what I want to talk about today is a very common circumstance where lots of clients have given away or sold or done other estate planning with most of their assets and they’re in the happy situation of leaving the residue of their estate or maybe specific assets to their family foundation.

The great part about that is there’s no estate tax and it actually limits the IRS’ interest lots of times in auditing the estate. But a problem can occur, and that is that although a client may have mostly, for instance, marketable securities or mostly assets that are perfectly fine for a family foundation to hold, there may be other items that it’s not great for a family foundation to hold. For example, small, remainder interest in a business; a few shares here or there, or pieces of land the family owns the rest of. Venture interests that nobody thinks much about, but they’re there and they have real value. They’re going to go to the foundation.

And no doubt, you told the client to do that and given them lots of ideas about how they could do that for many, many years. But then, it turns out of course that they never actually do it, and so here you are with an estate. What do you do? The estate administration exception, the probate exception under Section 4941, which is the section dealing with self-dealing, is your friend. What it says essentially is that, in an estate or in a revocable trust, disqualified persons, family members, can in fact buy things that they couldn’t buy from the foundation itself.

There’s some rules about this, but they aren’t complicated. The estate or the trust has to have the power to sell the property. You have got to have the power to sell or reallocate or do something. It can’t be an automatic request that cannot be moot. That would be a problem but, you don’t see that very often. You have to do it in a reasonable period of time before the estate or trust is considered terminated for income tax purposes. But, again, in the estates we’re dealing with, for the most part, you file an estate tax return and everything just takes some time.

The sale has to be for fair market value. We’ll talk about that in just a minute. And the consideration received has to be at least as liquid as what was being sold. And that’s a separate requirement really from the fair market value issue, so we have to talk about that for just a minute. And then, you have to have court approval for all this. Lots of families don’t like court approval because they don’t like going to court or because it’s public, et cetera, but that’s a requirement. If you don’t like court approval, your client needs to get rid of these assets in advance.

In many states, requiring court approval will necessarily bring in the state Attorney General who’s going to have a lot to say about fair market value, how is fair market value determined, was it a true arm’s length, independent appraisal. That can be an important issue. This liquidity piece – Oftentimes, if the interests are significant, the family of course wants to buy something. For what? For notes. We all know about that. Well, how liquid is a note compared to how liquid is a family business or a piece of real estate? For the most part, we think notes are as or more liquid.

But the Attorney General may have an issue with the interest rate on the note, the terms of their note, what kind of security is provided, all of which are independent of the actual federal requirements. Now, getting yourself set up for this sort of arrangement is not the end of the world. It’s often done with an option so that you can say, for whatever reason, suppose I have low basis in certain assets. I really don’t want to sell them to my children until after my death when I get a step-up in basis, then I’m happy to do the sale. And besides, these interests are going go to a foundation and I won’t have a lot of tax issues anyway, but I want to make sure my children can acquire these.

The code provides that you can set up an option arrangement and run that through the probate or estate administration exception as well. That’s not a big deal. It’s got to be what I’ll call a “normal option.” It has got to have business terms in order for that to work, but it does allow the owner of the business and the family to nail these things down in advance, which I think most of us turn out to think is helpful.

There are some other special instances that you can think about. If you have a significant minority interest in a business – let’s say a voting stock – and what you want to do is do a recapitalization where you’re going to redeem that stock or you’re going to convert that stock into non-voting stock, for example. Then, you can do that as well. There’s some exceptions: you have to go through the same process and you typically have to offer whatever change you’re making to all the other shareholders, which is no big deal if all the other shareholders are family members. But if 20% of the company is owned by employees or owned by outside investors, that can get to be complicated. By far, what we see are the simple sales, blessed by the estate administration or probate exception going forward. That seems to work pretty well.

The last thing that I’ll say is, just a note to remember that a lot of these rules also apply now to donor-advised funds and supporting organizations, so that you can have similar kinds of issues. The 2006 Pension Protection Act imposed, indirectly, rules that are similar to the private foundation rules on donor-advised funds, in particular, also on supporting organizations. So, if you’re leaving things to that, if your client is, you may want to take a look and just make sure that the DAF can hold the interest. So, Stacy, it’s an interesting process to go through. The key takeaway is, if you can solve your issues before your client dies, you’re a lot better off. But if not, the estate administration exception is super helpful.

Thank you, Turney, for helping us understand that estate administration exception to avoid self-dealing prohibition.