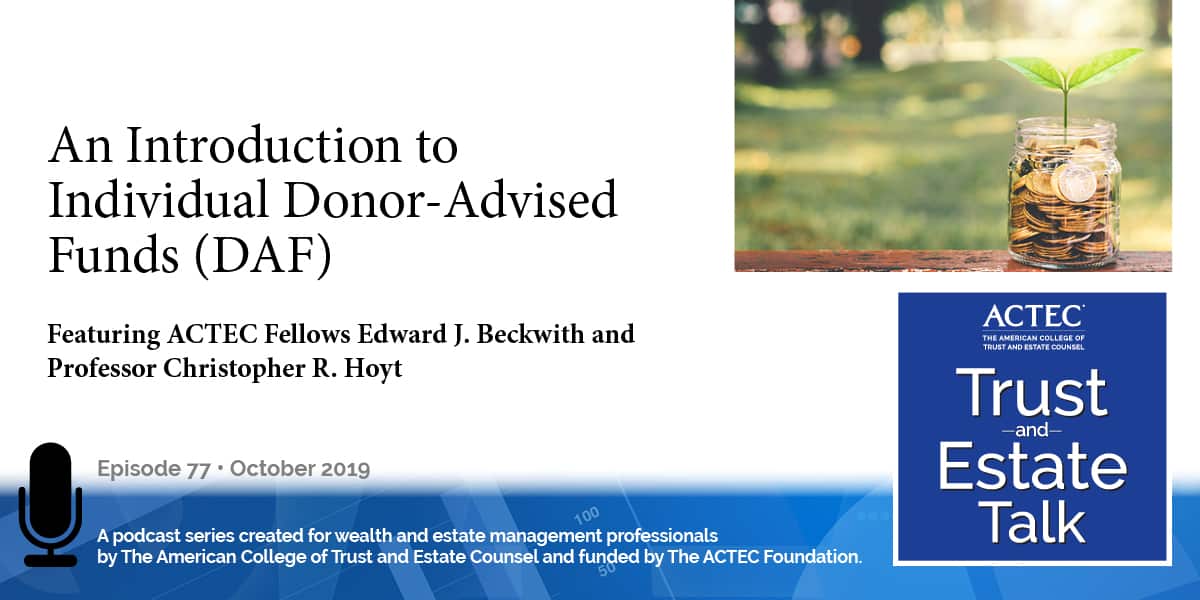 This is Susan Snyder, ACTEC Fellow from Chicago. To give us an introduction to the rules that govern Donor Advised Funds, you will be hearing today from ACTEC Fellows, Ed Beckwith, of Washington, D.C., and Professor Chris Hoyt, of Kansas City, Missouri. Welcome Ed and Chris.

I am Ed Beckwith. A Donor Advised Fund or DAF is a named fund at a sponsoring public charity. This podcast will review this flexible and attractive charitable giving vehicle.

In a DAF, the donor or the donor’s designee has the privilege of making nonbinding recommendations to the sponsoring organization about which charitable entities should receive grants from the fund and frequently, recommendations about investment of the fund’s assets. Donor Advised Funds have existed since 1931 and play a significant role in building two-way relationships between a sponsoring public charity and its donors. The term Donor Advised Fund was not defined in the Internal Revenue Code or in any corresponding regulations until the enactment of the Pension Protection Act of 2006. While the historic concept of a DAF was reflected in the definition, the Pension Protection Act added a long-standing best practice to the definition. Now, the sponsoring charity must clearly inform the donor that control of the gift will reside with the charity. This is required for the gift to qualify for a tax deduction.

In addition to an expanded definition, the Pension Protection Act imposed reporting obligations on the sponsor and excise taxes on certain distributions from the Donor Advised Funds that fall within the new definition. Chris, tell us more about modern day DAFs.

Okay. How does a donor create a DAF?

It’s so simple. A donor goes to a sponsoring organization like a community foundation, Jewish Federation, National Donor Advised Funds, and just sets up an account, makes an additional contribution and gives it a name — typically the name of the donor or the donor’s family.

Well, how would it actually work, once I’ve established the DAF?

Well, once the donor identifies a worthy recipient, they’ll recommended a distribution to that public charity or to even a private operating foundation, like a museum or a library.

Why is it that DAFs are so advantageous?

Well, the timing. You can make a very large gift all at once and then distribute amounts over future years.

They say the DAFs are tax preferred. Why is that?

Well, for two reasons. First of all, when you give to a Donor Advised Fund, you are giving to a public charity so you get better tax breaks than if you give to a private foundation, but also under this new Tax Act it’s become harder to itemize deductions. In 2017, 36 million taxpayers itemized their deductions. Now, it’s only down to 16 million. So, very few people can deduct their charitable gifts. So, you can concentrate your gifts; like if you give 10,000 a year, put 40,000 into a Donor Advised Fund and that way you will be able to itemize your deductions this year. Then in future years, take the standard deduction as the Donor Advised Fund makes a grant.

You were just comparing and contrasting Donor Advised Funds to private foundations. What is the difference?

Okay. So, when do donors prefer a Donor Advised Fund over a private foundation?

Well, if you’re going to donate real estate that’s only earning 1 percent — it’s going to take a few years to sell it — you really want a Donor Advised Fund rather than a private foundation because you won’t have that money to pay out.

Are there times when donors would prefer a private foundation over a DAF?

But if I had a private foundation, would it be possible for me to actually convert it to a Donor Advised Fund?

Why contribute to a Donor Advised Fund at all rather than contributing directly to a given charity?

That’s great. What kind of assets could I contribute to a Donor Advised Fund?

The most common gifts are cash, stock (especially publicly traded stock and bonds), but Donor Advised Funds can accept gifts of all sorts of things like real estate, stock, closely held business interests, even intellectual property and things that are less liquid.

To wrap up this podcast Chris, tell us again, who should start a Donor Advised Fund?

Thank you for teaching us more about Donor Advised Funds.