The American College of Trust and Estate Counsel Foundation (The ACTEC Foundation) announced the creation of the Distinguished Service Award. Approved by the Executive Committee of The ACTEC Foundation on February 17, 2020 and ratified by the Board of Directors on March 7, 2020, the award recognizes individuals who have made extraordinary contributions to the trust and estate profession and have provided exemplary service to and support of The ACTEC Foundation. Both the Executive Committee and Board of Directors further approved a resolution to bestow the first Distinguished Service Award jointly to Judith W. (Judy) and Howard M. (Scott) McCue. 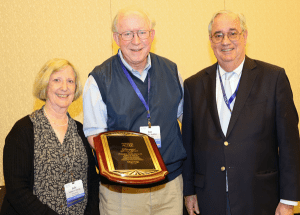 Judy’s and Scott’s contributions to the trust and estate profession are numerous and include serving as ACTEC President 2005 – 2006 (Judy) and as a Regent (Scott) of the College.

Not only have Judy and Scott contributed their time and talent, they have generously provided decades of financial support to The ACTEC Foundation.