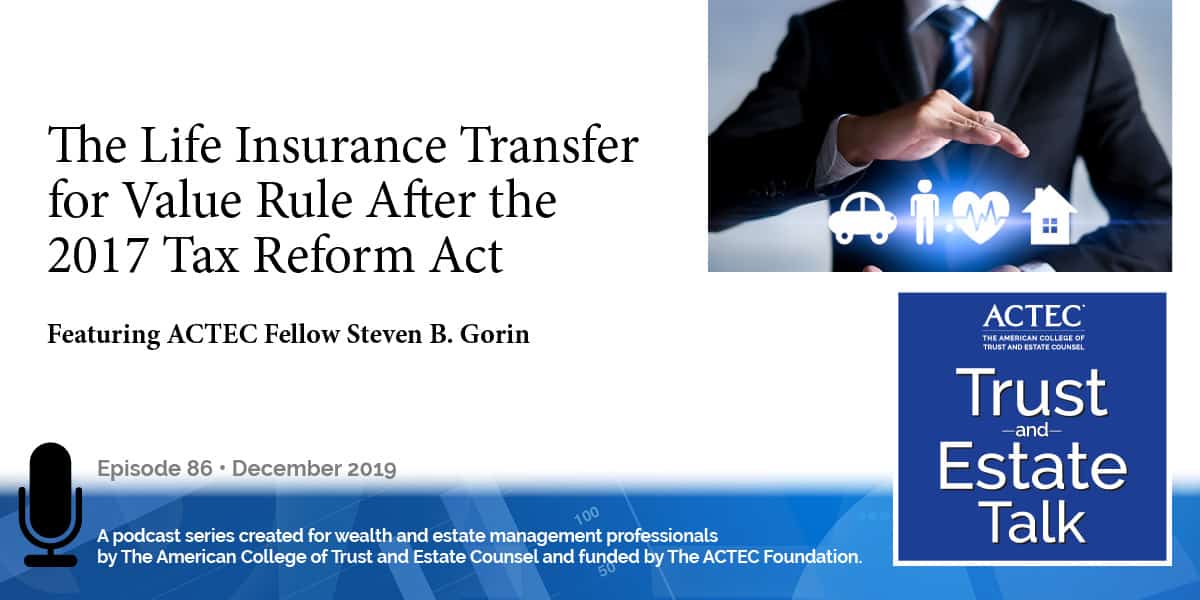 “The Life Insurance Transfer for Value Rule after the 2017 Tax Reform Act,” that is the subject of today’s ACTEC Trust & Estate Talk.

This is Birch Douglass of Richmond, Virginia. What is the Transfer for Value Rule and how has it been changed? To give us more information on this topic, you will be hearing from ACTEC Fellow, Steve Gorin of St. Louis Missouri. Steve.

Thank you, Birch. So normally, life insurance is not subject to income taxation. So, there are some exceptions to it. So, one of them has to do with business-owned life insurance and that’s under Code Section 101(j). We’re not talking about that today.

Another has to do with, if you make a transfer of a life insurance policy, they call it a transfer for valuable consideration, then you may ruin the income tax exclusion. So, in other words, even though death benefits are normally not subject to income tax, you can cause the death benefit to become subject to income tax. So this kind of reminds me of a story of a guy who is skydiving for the first time and he’s pulling on his parachute and pulling on his parachute, and it’s not opening and much to his surprise, he sees somebody shooting up from the ground. So, the skydiver asks the guy shooting up from the ground, “Do you know anything about parachutes?” And the guy shooting up from the ground says, “No, do you know anything about gas stoves?” And it’s really important to make sure that when you’re dealing with life insurance, that you don’t do something that’s going to blow up in your face later on.

So, this Transfer for Value Rule, generally for many, many years, there were two basic exceptions. One is, if you transfer the policy in a way that does not trigger income taxation, so that the recipient gets what we call a substituted basis, they’re looking at your original basis and they’re just having their tax basis based on what you originally had invested in the contract as a basis. So that was one exception to it. If you had something where there is no income tax recognition or maybe there was some limited recognition, but you still were looking to the basis of the original owner, then that would not be subject to this rule that would blow up the policy in your face. The other one is, if you had a Transfer to a Permitted Transferee, and we’ll talk about that in a moment, who that might be. But those were the two main exceptions.

And 2017 Tax Reform came along and said, “Look there are  a lot of life insurance policies that are being transferred on this life insurance settlement market where strangers are getting interest in your policy.” So, maybe you took out a policy and you had it for many years and you no longer wanted to pay the premiums on it, or maybe you needed the money earlier, you just wanted to cash in, you didn’t want to have to continue to hold this asset. Normally, if you cash it in, the life insurance company would just give you whatever the cash surrender value is and you’ll have ordinary income on the surrender of the policy.

And this life insurance settlement market has evolved over time, where you can actually sell your policies to an unrelated third party and they’ll pay you for their policy and then they can keep the policy going on their own; it’s up to them. But you get to cash out on your policy; you no longer have the burden of it and 2017 Tax Reform had a couple of things to say about that. So, one of the things they had to say about it was that there was a 2009 Revenue Ruling, that is Revenue Ruling 2009-13, that basically tried to reduce your basis, and Congress said, “No-no-no, that revenue ruling reducing your basis was totally wrong,” which a lot of us thought it was wrong anyway. But Congress retroactively repealed that 2009 Revenue Ruling, and that’s very unusual to do. But that was a very favorable thing for the life insurance settlement market and just for taxpayers in general. But the unfavorable thing they did is they said, “Look, if you sell your life insurance policy to a stranger, that stranger is going to have to pay tax on the full death benefit minus whatever basis they have.” So, they’re going to have to pay tax on it and they’re going to have to pay this tax because they are not really like a family member or business partner. They are a stranger and we don’t want strangers to take advantage of the Internal Revenue Code. That’s truly only for the people who normally would be taking out a life insurance policy on you. Not just your way of trying to cash out on your policy on a favorable basis.

So, Congress changed the Internal Revenue Code and they said, “Look, we don’t care whether you had any of these exceptions to the rule, the Substituted Basis Rule, the Transfers to Permitted Transferees Rule. We don’t care about those. If you are transferring it to a stranger, then that’s it. You don’t get the exclusion. Whoever buys this policy and any subsequent transferees, they’re going to have to pay tax on the death benefit.” So the reportable policy sales, what they called it, they used to do some reporting requirements as well as this income tax consequence. But basically, what they said is:  If you have this reportable policy sale, the death benefit is going to be taxable except to the extent of what you actually paid for the policy. So, when the person buys a policy from you, what they paid you for the policy and any premiums or other amounts they later paid. So, whatever they invested themselves, they’re going to be able to get that back tax-free because that’s only fair, but everything above that’s going to get taxed.

The other thing that they did is that they said, “Well, who is this evil purchaser who is going to get taxed?” They are anybody who doesn’t have a substantial family, business or financial relationship with the insured, apart from the purchaser’s interest in the life insurance contract. And so, some proposed regulations came out and the proposed regulations defined what is this substantial family, business, or financial relationship and so the proposed regulations kind of went through what the family relationships were and the only way they let trusts qualify is if it’s a trust for family members. They don’t have trusts for anybody else who qualifies and then they talked about other business and family relationships; and most of it is pretty fair but some of the trust and charitable interests, I don’t think that they were broad enough and so there should be some final regulations issued.

So those are the relationships that very well may change a little bit. Cleansing the policy is another issue. Can you undo the taint; is there an ability to do that? And, the old rules had certain ways to do it that were kind of limited. These rules give you more opportunities to cleanse the policy but not if you had a reportable policy sale. So that kind of is a way to alert you to what these issues are. Thank you.

Well Steve, thank you for helping us learn more about this aspect of life insurance policy transfers. Thank you.