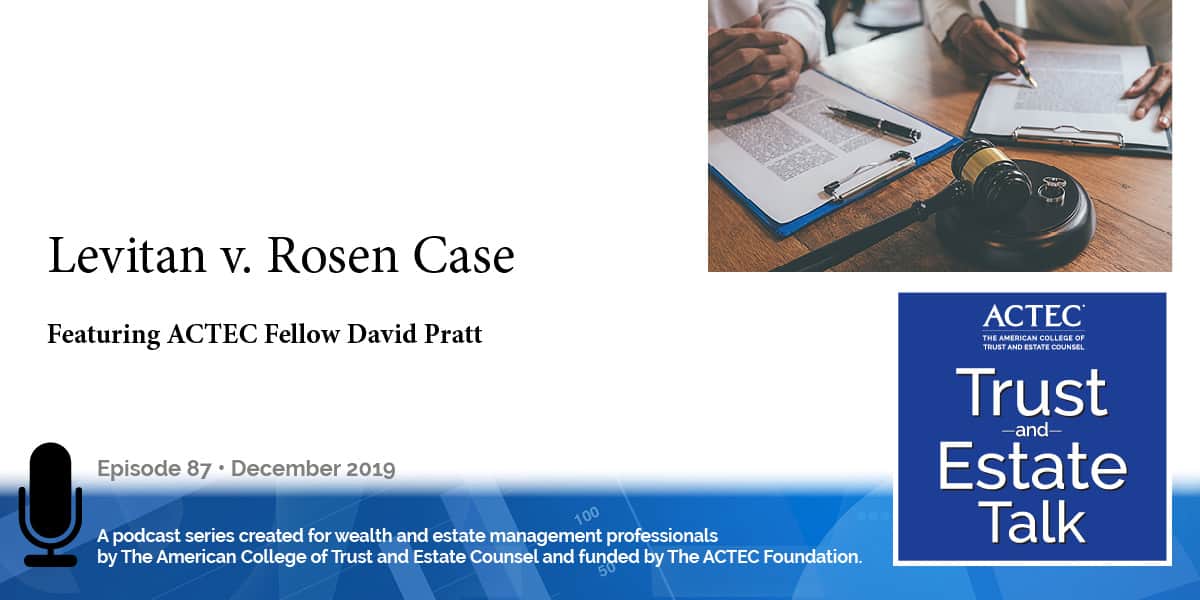 This is Glen Yale, ACTEC Fellow from San Antonio, Texas. Is an interest in a trust marital property in a divorce case? To give us more information on this topic, you will be hearing today from ACTEC Fellow, David Pratt of Boca Raton, Florida. Welcome, David.

Thanks so much, Glen. This is a very important question. We as planners draft trusts for our clients routinely and one of the reasons that we suggest ongoing trusts is to protect assets from creditors, and very often we include a potential son-in-law or daughter-in-law as a potential creditor. And more often than not, we are usually telling our clients that leaving assets in trust should protect assets in the event of a divorce. Well, over the last few years we have seen a number of cases come down in this area. In this case, Levitan v. Rosen is another case that addresses that exact question. That is, whether an interest in a trust is considered marital property in a divorce proceeding.

This is a Massachusetts case. The trust was a Florida trust and therefore, Florida law applied and it was Florida law that was construed in this case. This case involved a trust that was established by Amy Levitan’s father. When he died, she was a beneficiary of the trust. She was a co-trustee of the trust; there was an independent trustee of the trust. There were essentially two distribution provisions. Amy Levitan had a traditional 5 or 5 power that allowed her to request five percent or distribution of five percent of the assets each year and the independent trustee had the discretion to make distributions of income and principal to Amy during her life. There were no ascertainable standards.

On the other hand, with respect to the interest in the trust, it went a little differently. There was a case a few years ago and I always have a problem in pronouncing this case and hopefully I will not be too poor in my pronunciation now. It’s the Pfannenstiehl v. Pfannenstiehl case, another Massachusetts case that addressed exactly this issue; that is, whether an interest in a trust should be considered marital property. Well, here is the way it works in Massachusetts. The Massachusetts statute essentially says that all property needs to be and should be considered in the determination of whether an asset is marital property, and what the cases say is that an interest in a trust is property and you have to take a look at the exact terms of the trust as well as the pattern of conduct that took place with the parties. In the Pfannenstiehl case, there were multiple beneficiaries in the trust and in this case, Amy was the only beneficiary of the case, and the difference is very, very important. The reason is that when there are multiple beneficiaries in a trust, as opposed to just one beneficiary, the interest in the trust is more akin to an expectancy. On the other hand, when you only have one beneficiary in the trust and distributions are made on a regular basis, in that case the interest is really not an expectancy. It’s not remote, it’s not speculative and therefore, in this case the judge decided that in looking at the facts and the terms that this interest in this trust would be considered marital property.

Now, let’s understand, the trustee was not ordered to make distributions from the trust to satisfy any alimony provisions. The trustee was not required to make any distributions to Amy. The reason that this is important is that all of the assets in a divorce are considered. Essentially, there are three columns that are made; his, hers and marital. So, with respect to marital property, the general rule in most states is that marital property is divided 50-50 and the property that is marital property essentially gets allocated to the husband or the wife. In this case, there were a few assets that were able to be allocated. For example, there was a 401(k) and that got allocated to the husband’s side. The trust interest was Amy’s property for purposes of the marital property allocation, and it got allocated into her column. So, at the end of the day, it is a bad result for us drafting lawyers because a trust should be or I should say, should not be counted as marital property, particularly if that’s what a settlor intended.

So, the lesson is that we have to go back to the Pfannenstiehl case, also take a look at this case and if we want to ensure that the interest in the trust is not considered marital property, we want to probably make the interest remote or speculative, have multiple members of the class that could be beneficiaries such as Amy, perhaps, if Amy had any children, they could have been beneficiaries. Maybe distributions could have even been made to other people. You need a broader class. I should also note that this was a Massachusetts case and it appears that Massachusetts is notorious for these types of findings. So that was the holding in this case.

David, thank you for helping us to understand more about trust property in a divorce case.