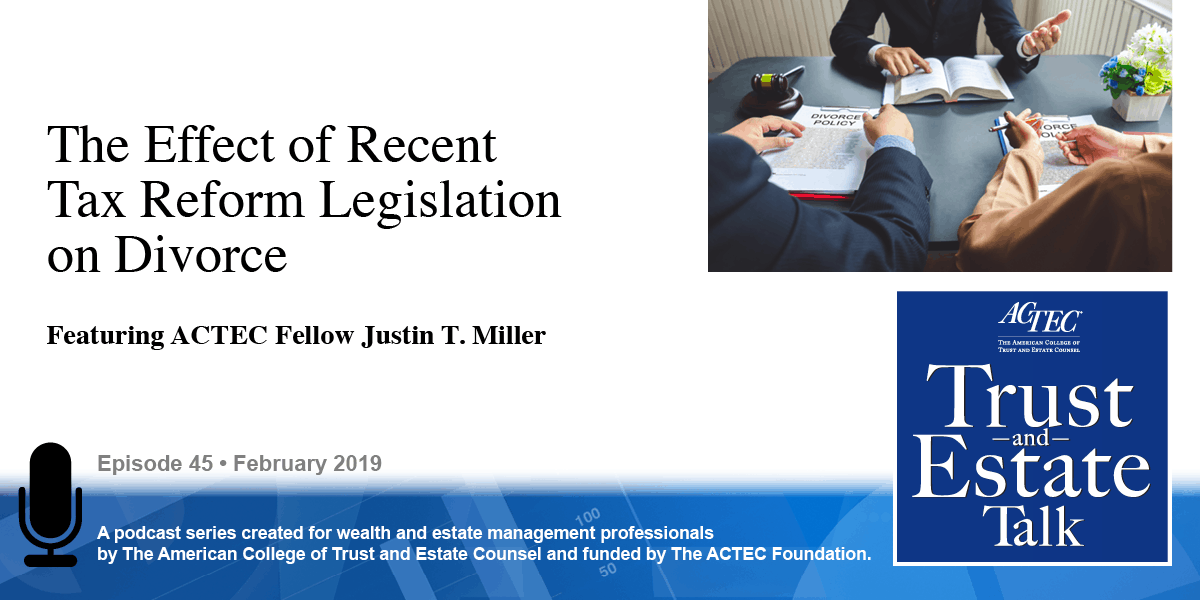 “The Effect of Recent Tax Reform Legislation on Divorce.” That’s the subject of today’s ACTEC Trust and Estate Talk.

This is Margaret Van Houten, ACTEC Fellow from Des Moines, Iowa. Recent tax reform legislation makes divorce a more expensive proposition. What is the impact of the new rules on divorce settlements and are there any remedies to restore originally intended economic consequences? To answer these questions you will be hearing today from ACTEC Fellow Justin Miller of San Francisco. Welcome, Justin.

Thank you. I’m going to cover today are really five big changes with recent tax legislation that could have a significant impact on divorces, not just now, but down the road as well. So, the first big change has to do with how you file your taxes. After a divorce, you’re generally going to be filing as either single or head of household. Head of household would be if you have custody usually of a child and in past years when you were filing as head of household you had better tax brackets. If you had to take care of a child, you had custody of a child, you should have a better tax situation. Well, what changed starting in 2018 now is that if you itemize your deductions as soon as you make $51,800 or more, as soon as you’re above that amount, you don’t get an additional tax bracket preference for being head of household.

Now if you don’t itemize there is a higher standard deduction, it went from $12,000-$18,000, but for those parents who get a divorce and itemize- meaning they have high state and local taxes, maybe a big mortgage interest deduction- they will not get the benefit of tax brackets anymore for having custody of kids once their income exceeds $51,800. So it’s already gotten more expensive to get a divorce.

The third big change. The third big change is that you’re no longer allowed to deduct items related to divorce. Now, it used to be in years past you never were able to deduct certain items related to divorce because divorce is considered a personal expense; you don’t get to deduct personal expenses. But there are special kinds of deductions that in years past, called Section 212 deductions, that dealt with things like getting tax advice or collecting alimony production of income, dealing with retirement accounts that were deductible. Starting in 2018, you’re no longer allowed to deduct those 212 deductions and that means divorce is already a lot more expensive. The few times that you were ever able to have enough of these legal expenses, accounting expenses, where you could take advantage of that 212 deduction would be in a divorce and we no longer are entitled to that type of deduction.

Fourth big change, the alimony deduction. Starting next year, 2019, if you get divorced, if you have a divorce or separation instrument after 2018- so starting in 2019- there is no longer deduction for alimony. Spousal support that qualifies as alimony- no more deduction. So, this year, as long as you finalize the divorce this year or if you finalized it in years past and did that divorce or separation instrument, the person paying the alimony gets to deduct it. The person receiving the alimony has to include it. Starting next year the deduction disappears. This was a way to have higher income spouses making more money who generally work. It was a way to get more money to the lower income spouses, sometimes the spouse taking care of the kids who didn’t work. That deduction goes away which is going to make it more expensive for both spouses to get a divorce because that income is going to be taxed at the higher level. There will be less money to provide to the lower income spouse.

The last big change, Section 682 is going away starting in 2019 if you don’t have a divorce or separation instrument. What’s section 682? Section 682 deals with grantor trusts. If you create a grantor trust during marriage, and as long as you get divorced in years past or this year 2018, Section 682 says, the grantor doesn’t have to pay taxes on any of that trust income that goes to the grantor’s ex-spouse. Seems like a fair rule, they’re divorced, that money from the trust is going to the ex-spouse. But if those spouses get divorced starting in 2019, guess what, the grantor who set up this grantor trust could be on the hook for all of the taxes for the rest of his or her life even though money is being paid out every year to that grantor’s ex-spouse and it doesn’t matter when you did the trust agreement, you could have drafted that trust agreement 10-15 years ago. Section 682 disappears for anyone that doesn’t have that divorce or separation instrument by the end of 2018.

Those are the five big changes. I hope that helps you and I hope everyone has a great day.

Thank you for educating us on tax reform impacts on divorce.