How Guardians Make Decisions on Behalf of Their Wards 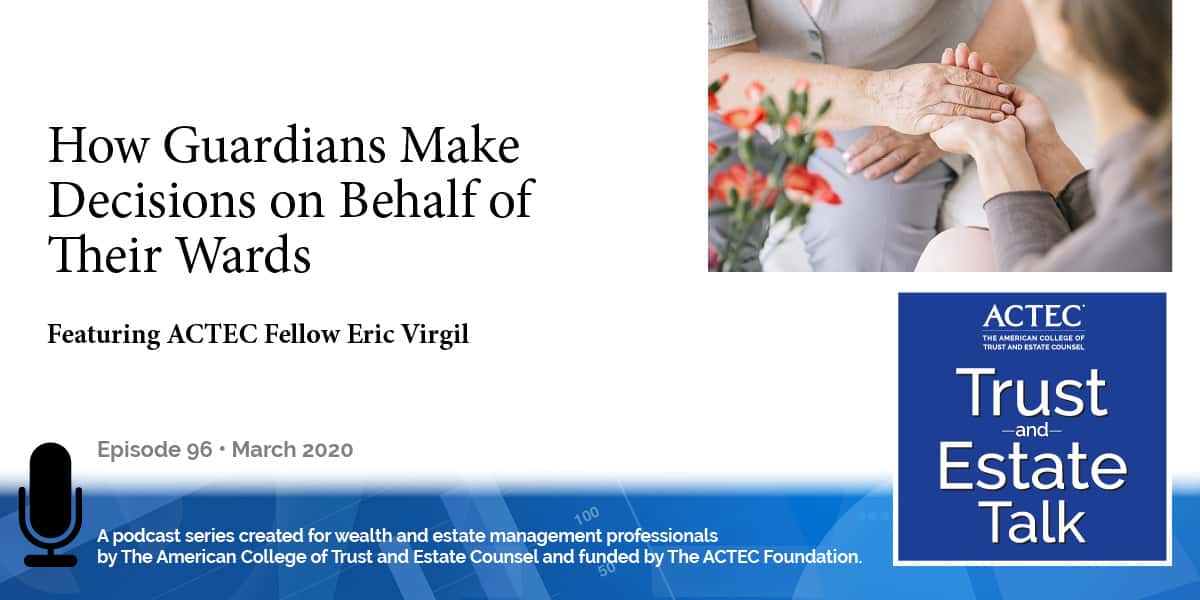 “How Guardians Make Decisions on Behalf of Their Wards,” that is the subject of today’s ACTEC Trust and Estate Talk.

This is Birch Douglass of Richmond, Virginia. In order for guardians to make any decisions for a ward, the guardian must balance two competing policies. To give us more information on this topic, you will be hearing today from ACTEC Fellow Eric Virgil of Coral Gables, Florida. Welcome, Eric.

Thank you, Birch. And to start, it’s important to know that a guardian is a special type of fiduciary. A guardian is appointed by a court like a personal representative or an executor of an estate. But unlike a personal representative or an executor, the guardian is administering both the personal life and the property of a living person. The guardian is expected to fulfill two really strong public policies. Those policies are, number one, the guardian is to protect a vulnerable person — either a minor or an incapacitated adult — from exploitation. That’s a real danger, especially for elderly people with mental incapacity. They’re very vulnerable to exploitation. So, the guardian’s first role is to protect that vulnerable person from exploitation. But, because you’re dealing with a living person that has goals and dreams and their own life history and desires, a guardian is charged to uphold the rights and the dignity and the autonomy and the freedom of this living person. In those two policies, this protection of vulnerable people — but at the same time keeping them as free and with as much dignity as possible — they can come into conflict.

So, how does a guardian make a decision on behalf of their ward in light of these two policies that can potentially conflict? What you need to understand about guardianship is that a guardian is basically appointed by the court to make decisions on behalf of their ward.  So, how do you do that? Well, because a guardian is a fiduciary, a guardian, like any other fiduciary, has a duty of good faith and loyalty to their ward. But the issue is, what does loyalty mean? What does good faith mean in light of these potentially conflicting policies? The way you could potentially make decisions on behalf of a ward is, I’m going to give you a list and then I’ll tell you how it has really been narrowed down by the courts and by the laws in the various states. There are potentially seven standards that a guardian could use to make any decision for a ward. The first would be, do what the ward would have done if the ward could make the decision themselves, if the ward was not incapacitated. What would the ward have done? That’s the first possible standard. The next possible standard is, do what’s in the ward’s best interest. In other words, protect the ward by making an objective analysis of what’s in the ward’s best interest. The third standard is to do what’s not contrary to the ward’s best interest. The fourth standard is, do what’s best for society as a whole. The fifth standard is to do what’s best for people who are dependent on the ward, like a spouse or minor children, or people that the ward has been supporting. The sixth standard is to do what the guardian thinks is best, in the guardian’s own judgment; and the seventh standard would be, do what you think the judge is going to think is the best. A lot of times that’s the reality but that’s not what the law says.

So, how has this played out in states around the country? Well, a good number of the states have an actual decision-making standard in their guardianship statutes. The standard is, you can find it by searching your statutes or your legal code in the various states. Some states will have substituted judgment; that’s the standard for guardians. Some states will have best interest. Some states will have a blend of those approaches, and it’s set forth in the laws or statutes of the various states. So, if you’re a guardian or a lawyer looking to represent a guardian, you can look in the code of that state. However, some states have not codified the decision-making standard. And so, in order to find that law, you have to search the case law and you have to look for relevant decisions to determine, should I make a decision based on substituted judgment or should I make a decision based on best interests? As you might imagine in guardianship, there are a lot of situations where there is no clear guideline. There’s not a relevant statute or case, or it doesn’t seem as if there is a clear answer.

So, I’m from Florida, and I’ll give you an example of how things operate in Florida to illustrate the point. In Florida, you basically have two main standards, the substituted judgment standard and the best interest standard. Florida has not codified one sole standard. And the way that the decision-making works in Florida is really the substituted judgment standard is applied for health care decisions as a first measure. The reason for that is the decision to either accept health care or to reject health care. If I’m not incapacitated, I have a constitutional right to decide whether I want to receive treatment or reject treatment. The Florida courts have said incapacitated people have that same constitutional right. And so, that’s part of Florida’s constitutional right to privacy. Since it’s a personal constitutional right, Florida has said health care decisions are substituted judgment. The guardian needs to try to figure out what the ward would have wanted to do with regard to their personal care and apply that standard. A couple of other matters where substituted judgment applies in Florida would be the gifts of the ward’s property and certain estate planning. In other words, the decision of the ward to name a beneficiary or to make charitable donations or to make gifts to family members; that’s deemed to be a personal decision of the ward. You might think, well, how does this decision-making play out? To give you an example, the guardian needs to know whether a gifting decision is substituted judgment or is best interest, because when a guardian is protecting a ward’s funds, is it ever in the ward’s interest to just give away the ward’s money to other people? Potentially, it’s not. Potentially, the guardian, if it’s analyzing things on a best interest basis, could think it’s in the ward’s best interest to keep as many assets available for the care of the ward as possible. However, if a ward has a pattern of, every year, making a donation to the ward’s church or to a charity of the ward’s choosing and that was important to the ward — both in terms of the ward’s spiritual life, in terms of the ward’s well-being — is it the guardian’s place to stop those donations? And so, the courts have said, at least in Florida and in many other states, those types of gifting decisions — the guardian can engage in looking at —what would the ward have done? It’s important for the guardians to know which decision-making to apply.

To give you an example of best interest, and then I’ll kind of wrap up and tell you where things are going nationally, the way best interest decision-making has been applied is in most financial, legal, and contractual matters. In other words, the decision when the guardian is trying to decide, how do I invest the ward’s money? The ward might have had a reckless investment strategy, might have had a conservative investment strategy, but the guardian has to just act as a prudent person. Regardless, the ward might have wanted to spend all their money on lottery tickets, but the guardian can’t do that. The guardian needs to safeguard the ward’s assets, and so those things are governed by best interest. Similarly, many financial and legal matters are going to be decided by best interest. And so, to look at where you would find these standards from state to state. The first thing is, the guardian should look at the statutes, then look at the case law, and that’s where the lawyers would be looking for it. The trend nationally, and where I think we’re going with this, is that there’s going to be a blend of decision-making. What you see is more and more consideration of substituted judgment because it’s important for the ward’s freedom and autonomy and dignity to be preserved. But at the same time, that substituted judgment is going to be blended, I think, as a trend with the idea that we will follow the goals and wishes and past pattern of the ward, so long as it’s not contrary to their best interest. In other words, we want to prevent the ward from being harmed and effectuate their goals as much as possible. So, I think that’s where we’re going. But right now you still have a mix of decision-making standards, and from state to state the law can be different; so you really need to look and see in each state that the guardian has to look at their own law in order to determine, how do they make decisions.

Well, Eric, thank you for educating us on decision-making in the guardianship area. Thank you.

You may also be interested in The Uniform Guardianship, Conservatorship, and Other Protective Arrangements Act podcast.