An Update on Electronic Wills Statutes 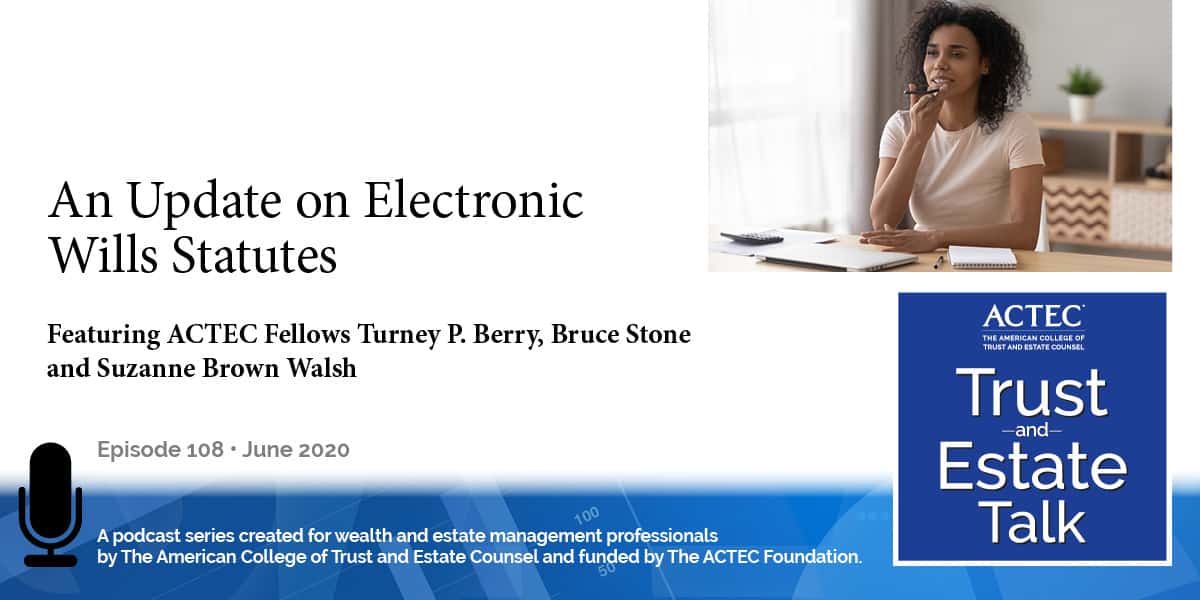 “An Update on Statutes on Electronic Wills,” that is the subject of today’s ACTEC Trust & Estate Talk.

This is Connie Eyster, ACTEC Fellow from Boulder, Colorado. Now that the Uniform Law Commissioners have finalized the uniform electronic wills statute, it is helpful to get an update on the current status of e-will statutes. To give us more information on this topic, you will be hearing today from ACTEC Fellows Suzanne Brown Walsh of Hartford Connecticut, Bruce Stone of Coral Gables, Florida, and Turney Berry of Louisville, Kentucky. Welcome, Suzy, Bruce, and Turney.

Thank you. In July of 2019, last summer, Uniform Law Commission approved the Uniform E-Wills Act and instead of calling it UEWA, we are calling it the E-Wills Act. That Act, unlike the existing state laws that we talked about in our last podcast (The Digital Will Revolution), is a dedicated Act that is simply designed to translate the traditional Wills Act requirements and make them applicable to the new medium of electronic wills; and Bruce is now going to give us some background on the why of that project.

I am sitting here, and I have got a smartphone here with me. People can’t see it on the podcast, but I do everything on this smartphone. We just came from a meeting, which Turney chaired, and I actually e-signed a document while we were sitting in the meeting. So, I can do everything on this iPhone. Can I do my will? Why can’t I do my will the same way? A lot of younger generation people are accustomed to doing everything on their iPhones and their computers. People do not have checking accounts anymore. So why can’t we do that?

Well, we decided in Florida, or some people decided in Florida about two or three years ago, that we are going to have electronic wills. We were not going to wait for the Uniform Law Commission, and so in 2017 in Florida, our legislature passed an Electronic Wills Act. And, it went to the governor; it was vetoed by the governor. It came back again in 2018 – did not make it through – came through again last year in 2019; and this time it made it across the finish line and the governor signed it. So, come July 1 of this year, 2020, we are all sitting here in the State of Florida; we have a currently effective electronic wills law on the books where anybody can go online and sign their own will online. You do not have to be here in Florida, by the way. All of you listening to this podcast, if you are in Kentucky, you are in Connecticut, you are in Colorado, wherever you may be, please come in and log in and join one of our Florida remote online notaries and you too can sign your will online in Florida. It will be a valid will under Florida law, and we will enforce and carry out the terms of your will in Florida to the extent that we can possibly do so. And so, there you have it Turney. We did not need to wait for you guys. We went ahead and did it.

Well, we are proud of you for doing that. Are you the only state that has done that or are there some other states that have also done that?

Well, as I think those of us sitting here know that Arizona actually was the first to leap into the breach, in fact, I think in 2000 they actually had an Electronic Wills Act…

Nevada. I am sorry. Strike that.

Yeah, exactly. Sorry to my friends in Arizona. It was Nevada. And then, Nevada came back and passed this law. And again, I think it was around 2017, and updated it. Next up on the list—though I think now this is where I can mention – Arizona did pass one and I think it became effective last year.

We really give states the choice. Our intuition was that there are really two different parts of this project. One is a change in the medium. We have always known that you could have wills on paper. That is where most of our wills are and, of course, in law school you’ll have cases with other kinds of laws. Somebody will scrawl something on a fender when they are trapped under a tractor or in some other sort of thing. And so, then the question gets to be, well, why not a tablet? Why couldn’t I write my will on a tablet if it were witnessed and notarized? Does it really make any difference if it is a tablet versus a piece of paper?

And I assume you are not talking about the tablet that Moses came down with.

Nothing. Not an actual rock tablet. This is one that is a little bit easier to deal with than that. Does not require Cecil B. DeMille or any other fancy footwork. We can all just do a tablet. And if it is witnessed and notarized, it works just like paper, but courts struggle with that, of course. I mean, they wonder. And so one part of our Uniform Act basically blesses tablets, electronic medium. So, it could be a tablet. It could be a computer. It could be an iPhone, whatever it might be. Then the other piece, that is much more controversial, has to do with remote witnessing. So, we do this electronically and then we round up some witnesses. Maybe we round up a notary, and they are not all in the same physical location. (Visit 2020 Emergency Remote Notarization and Witness Orders for updated due to the COVID-19 crisis.)

They are all present, we would say, because they are present online through something you might think of like a Skype mechanism. So, it is not quite right to say that they are not there. We are not allowing witnesses and notaries to do something at another time. And I would say that it is not really that they are not present. They are present. They are simply not physically present. So, we have taken a hard look at the definition of what does present really mean in this current age, but that is a very controversial notion. Some lawyers and trust officers and other people that do this kind of work think that the absence of physical presence poses the risk of all sorts of mischief; and there are lots of other people who say it does not really pose any prospect of mischief more than anything else.

So, that was a source of great debate in Florida in our electronic wills legislation. Isn’t it going to encourage fraud, exertion of undue influence by allowing people who cannot see they are not physically present with a testator? So, we have reached a compromise in Florida. We have carved out so-called “vulnerable adults”. And for anybody who is a vulnerable adult to sign a will or a power of attorney, the so-called superpowers, the powers to access your bank accounts and so forth, revocable trust, we are one of the, I think, maybe the only state in the country that requires that revocable trust, which dispose of assets at death, be executed with will formalities. A lot of people do not understand that, but those categories – if you are a vulnerable adult – the witnesses must be physically present with you, even though it is an electronic will.

Who are vulnerable adults under Florida law?

But, there is a problem with it, because it includes just the physically disabled who need assistance with general tasks.

You know, I like to use the example of Justice Ginsburg – one of the times when she was in the hospital for one of her treatments – probably would have been classified as a vulnerable adult and not able to sign a will with remote witnesses.

But one thing that this talk about remote online notarization and remote witnesses reminds me of is that quietly in the background, as we were drafting our Electronic Wills Act, about 22 states enacted and are now implementing remote online notarization for other legal documents. So this is, sort of, this quiet background revolution that has informed our discussions, and I think will make, generally, people more comfortable than they already are using their phones and executing documents online.

When you go through the way that the statutes—the remote online notary statutes work, there is a level of sophistication and verification. So, you know who you are dealing with; there are records. In a lot of ways, these documents will have better integrity and more security than old-fashioned paper documents.

And that is one of the things we had to defend at the beginning of this project, where we had to explain to everyone who would listen to us – how safe and sound these documents were, and how they could not be forged. And, it’s interesting, I do not feel that we need to do that anymore. People have accepted that; they understand that, because they are getting more and more accustomed to signing legal documents electronically, and they have more faith in that process.

So, Suzy our Uniform Act requires – retains a requirement of text. Talk to us a little bit about that.

Great debates. We had great debates about whether we could tell Siri—we could dictate our will to Siri and have it signed, sealed, and delivered all with our voices. There have been cases involving video wills. There have been cases involving emoji wills, and we collectively decided the world was not yet ready, or at least the United States was not yet ready for that, and decided that in our world, an electronic will had to be readable as text when it was signed. It could not be readable as text later or before; it had to be when it was signed, and we are sticking to that.

So, you can dictate your will to Siri, and the Siri translates it into text, and then it is signed.

That works, but you cannot just have –