The Uniform Trust Code and the Future of American Trust Law 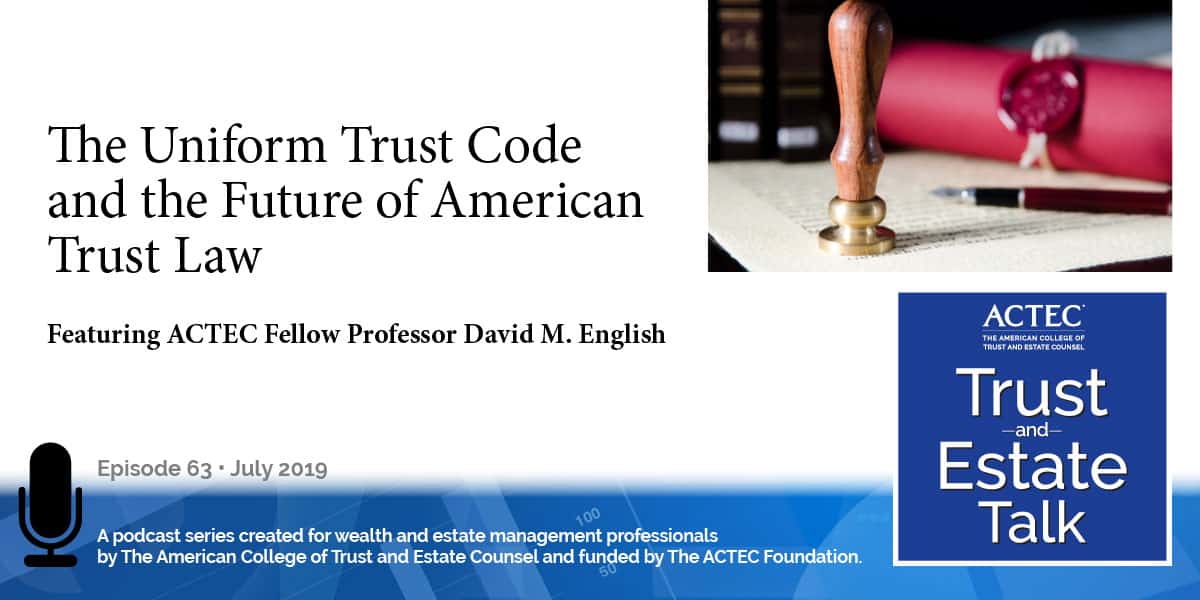 “The Uniform Trust Code and the Future of American Trust Law,” that’s the subject of today’s ACTEC Trust and Estate Talk.

This is Doug Stanley, ACTEC Fellow from St. Louis. As the Uniform Trust Code, or UTC, moves toward its 20-year anniversary, we have seen vast changes in trust design and administration. To discuss the UTC in 2019, we will be hearing today from Professor David English, ACTEC Fellow from Columbia, Missouri. Welcome, David.

Thank you. I also was the reporter for the UTC, which was completed in 2000. That means I was the principal drafter, although we had lots and lots of helpers. With the act approaching its 20th anniversary, it’s a good time to take a look at how well it’s done? What were some of the successes? What were some of the challenges? And, of course, with 20 years now passed we have newer developments that we need to account for that have gone well beyond the UTC. And so, the UTC, which was completed in 2000, has now been enacted in 31 states and the District of Columbia. No Uniform Act is ever enacted without change, and so among the challenges I’m going to be talking about this afternoon or during this presentation are some of the areas where states have made the greatest modification.

The UTC, while it is comprehensive, doesn’t cover every single thing in trust law. So we need to remember we have a separate Uniform Prudent Investor Act, which has been enacted in almost all states. We have a Uniform Principal and Income Act, which was just redone as – and a new title given, the Uniform Fiduciary Income and Principal Act. And as I’ll talk about in a couple minutes, we have two relatively new Uniform Acts that directly intersect with the trust code, and that’s the Uniform Act on Trust Decanting and the new Directed Trust Act. So, let’s talk a little bit about these newer developments.

One of the problems when you draft a statute is it can be up-to-date as of the date of approval, but it’s very, very hard to keep going back to the states to do continual amendments. And so sometimes it’s easier to simply account for newer developments by enacting other Uniform Acts or on other topics. And so the Uniform Trust Decanting Act in 2015 deals with the topic that was in its infancy when the UTC was completed, but became more mature. And so it’s now available for enactment in the states, and the Uniform Directed Trust Act, very similarly, trust protectors was known in 2000, but was not as developed as it is now. And so, we have a Uniform Act on that topic as well.

Successes of the Uniform Act

Okay. Well, what are some of the successes in the Uniform Act? (Summary of the Uniform Trust Code, Section by Section) Among the more successful provisions are the provisions on representation and non-judicial settlements that I’ll talk about in a second. Provisions on trust creation — almost no debate about how the UTC has handled that topic. The authority of the court to modify or terminate a trust, again had been enacted largely without change in the states. The UTC has a whole article on revocable trusts; that’s been enacted with some modifications, but not particularly controversial. The duties and powers of the trustee — UTC for the first time tries to spell them all out in 17 different sections in Article 8. That’s been enacted largely without change. And then finally, Article 10 deals with trustee liability and relationships with title companies, insurance companies and so on and those have been enacted largely without change.

So where are the areas of greatest challenge? And I’ll sort of go through those in order. First one is Section 411, and section 411 deals with the ability of the settlor and the beneficiaries to get together to modify or terminate an irrevocable trust. In drafting the UTC, we tried to copy what we thought was the common law at the time. There was not full agreement on what the common law was. And so, we came back in 2004 and amended Section 411 to provide a variety of options on circumstances when the settlor and beneficiaries can get together to terminate an irrevocable trust. And so, the result is we essentially have three or four different versions of the UTC around the country on that provision. (Amendments to the Uniform Trust Code)

Another area of challenge, spendthrift and creditor rights; this one we knew would be difficult going in. Spendthrift was not part of the British common law. It was invented in the US. There was great diversity of approaches on the states on how to recognize spendthrift particularly concerning exceptions. And we’ve seen that same diversity spill over into the UTC enactments. Trustee removal, both a success and a challenge at the same time, the provisions dealing with the traditional bad actor type removal of a trustee have not been controversial, but the UTC has added newer grounds including substantial change of circumstances and can the beneficiary’s request be taken into account. That’s been largely successful, but it’s not universal and it’s still under discussion.

And then the final one I’ll mention is the duty to keep the beneficiaries informed. And under the Uniform Trust Code, there really are two provisions that are relevant. Number one, what is the default rule? What is the law if the trust document is silent? And secondly, to what extent can otherwise required notices be waived in the trust instrument? And the provisions – the default rule provision has been fairly successful, but the provision dealing with waiver and the ability of a settlor to waive, what would otherwise be required in the document, has just gone off in all kinds of different directions.

So Missouri, the state I’m from, I’ll call it a minor tweak state, but we’ve had states totally eliminate any reference to this issue. And the way that it comes out in the UTC is that would imply that a settlor could totally waive notice to beneficiaries. And so, a great variety of approaches have been taken in that regard.

Thank you, David, for your reflections on the Uniform Trust Code.

A review of Florida’s Electronic Wills legislation including who’s a qualified custodian of e-wills and what is a vulnerable adult.

END_OF_DOCUMENT_TOKEN_TO_BE_REPLACED

The Senate Went Blue, What Should Estate Planners Do?

Leaders in the T&E field offer estate planning tips for 2021, insight into possible changes to the tax code and options for tax planning.