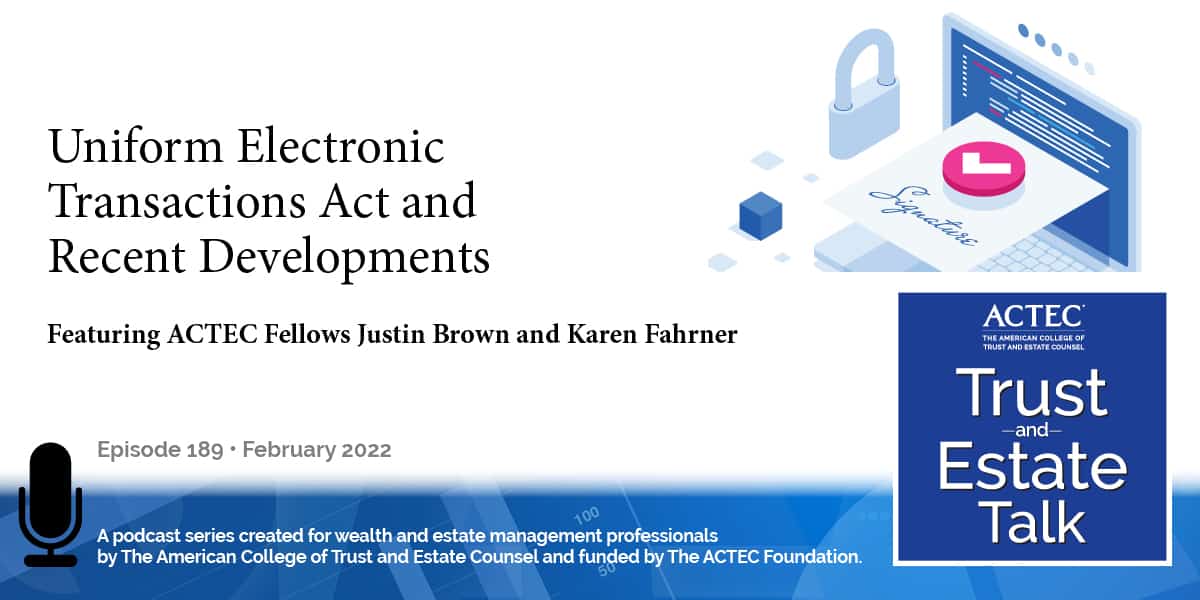 This is Margaret Van Houten, ACTEC Fellow from Des Moines, Iowa. ACTEC Fellows Justin Brown and Karen (Kim) Fahrner from Philadelphia, Pennsylvania are joining us today to explain this act, including remote notarization and some recent developments with electronic wills.

Justin Brown: Thanks, Margaret. Any discussion of electronic wills has to start with the Uniform Electronic Transactions Act, or “UETA”. UETA forms the basis for authorizing the use of electronic signatures on documents in a transaction.

Details of the Pennsylvania Implementation of Uniform Electronic Transactions Act

Pennsylvania, the jurisdiction where the cases that we will be discussing today occurred, passed the Pennsylvania Electronic Transactions Act, or “PETA”, which mirrors UETA.

Karen, now that we have a better understanding of UETA, can you tell us about how remote online notarization laws developed during the pandemic?

Karen Fahrner: Thanks, Justin. Pennsylvania also has a statutory framework regarding notaries. It’s known as the Revised Uniform Law on Notarial Acts or “RULONA”. Pennsylvania’s RULONA is based on a version of the Uniform Act that did not allow for remote notarization at the time of Pennsylvania’s adoption of the act.

That change is based on the latest version of the Uniform Act that includes provisions for allowing remote notarizations.

So, Justin, how did all this develop and have an impact in Pennsylvania?

It goes on to say that for certain estate planning documents, such as a self-proving will, notaries may use audio/visual communication technology as an alternative to personal appearance, so long as the safeguards in the proposed RULONA law that Karen mentioned are observed, including using an e-notary solution already approved by the Department of State that offers remote notarization technology.

While this all sounded great to estate planning attorneys, the approved e-notary solution that would permit remote notarization required electronic signatures. They were not set up for remote ink notarization. So, while the statement aimed to help people execute their wills, it really didn’t do anything because it didn’t ease the will exception in PETA.

And this all sets the scene for the Waltman decision, a Register of Wills opinion out of Cumberland County, Pennsylvania. The facts in Waltman are the typical facts that most estate planners faced during COVID at some point. The client was in a retirement community that was in lockdown during COVID, and it was impossible to get witnesses or a notary to the client to sign their will.

So, the attorney for Ms. Waltman, thinking that the Department of State’s statement permitted the use of e-wills in Pennsylvania, had Ms. Waltman execute her will through DocVerify, whereby the testatrix, two witnesses, and a notary all signed the will remotely and electronically.

The signatures were in cursive, computer-generated font, which indicated that the testatrix typed her name on the computer rather than physically signing her name with a pen, her finger, or a stylus.

Since the term “writing” is not defined in the Pennsylvania Probate Code, the Register looked to Pennsylvania’s Rules of Evidence, which define a writing as consisting of letters, words, numbers, or their equivalent, set down in any form. For wills, writings don’t have to be on paper. In fact, reference was made in the opinion to how a will could be carved in wood, written in blood, or even written on the fender of a tractor.

The key component to a writing is that it can’t be modified, and this electronic document, the Register believed, was safe, secure, digitally barcoded, and not able to be modified so that it fits within the definition of a writing.

Next, the Register looked to the definition of a signature in the Pennsylvania Rules of Civil Procedure, which provides that a signature can be a mark when the individual cannot write, or a computer-generated signature, or a signature that’s created, transmitted, or received or stored by electronic means unless otherwise provided in the rules.

So, the Register danced around PETA and found Ms. Waltman’s will to be a valid electronic will. Now, many people say that this is a stretched interpretation of RULONA and PETA. Others say that this is only a Register of Wills’ opinion, and it really holds no significant weight. The problem is that it creates a situation in Pennsylvania where this type of Electronic Will may be probated in Cumberland County, but the same exact will would not be probated in other counties in the Commonwealth.

We as drafters need consistency in the law so that we can be assured that a will we draft will be probated anywhere in the state.

So, Karen, can you tell us how an Orphans’ Court in a different county in Pennsylvania dealt with an electronic will after the Waltman decision?

Karen Fahrner:  Well, yes, Justin, thank you very much. The second case that we want to discuss, the Baker Estate in the Pennsylvania Orphans’ Court of Lancaster County, decided that the electronic will in question was not valid. But unlike Waltman, in Baker, the purported will was signed, and the decedent died before the March 2020 COVID lockdown.

What happened was the decedent sent an email to himself and his fiancée with his typed electronic will attached in an encrypted format. The words reciting the date of execution were at the bottom of page 11 of the electronic will, along with the decedent’s typed name.

On page 12 there was a memorandum regarding the disposition of personal property that stated it is an addendum to the will, and at the end of that page, there were certain execution-related recitations followed by the decedent’s digitized signature. In other words, it was an electronic replica of his manual signature.

The court said it would not exceed its authority, including its equitable powers, by expanding the statutory requirement in Pennsylvania that a will must be signed at the end, to include the placement of an image towards the end of the document in lieu of a testator’s manual signature. The court noted that PETA does not apply to wills and said that by specifically stating that PETA doesn’t apply to wills, the legislature declined to alter the fundamental requirement in Pennsylvania that a will be executed with an ink signature or mark at its conclusion.

The court, therefore, determined that a digital signature remains unacceptable as a method for will execution in Pennsylvania. So, these two cases, while arising in different contexts and under different facts, reveal serious issues in applying 21st-century electronic signing techniques to wills where there is no statutory framework to allow such wills to be valid.

Margaret Van Houten: Thank you, Justin and Karen, for keeping us updated on this act.