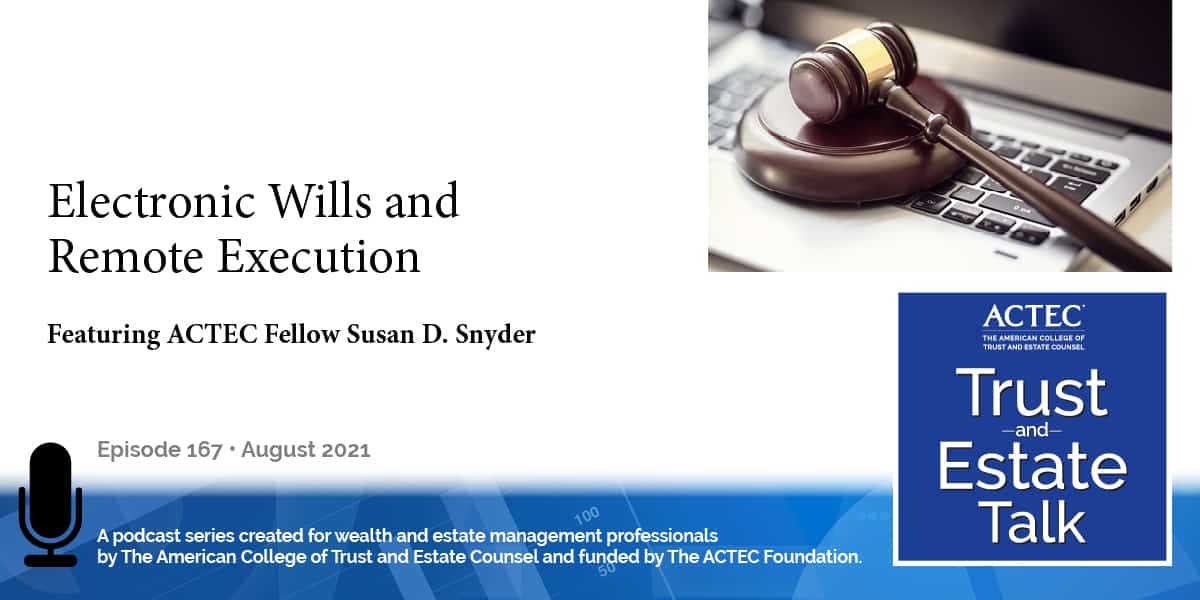 “Electronic Wills and Remote Execution,” that is the subject of today’s ACTEC Trust and Estate Talk.

This is Travis Hayes, ACTEC Fellow from Naples, Florida. In 2019 the Uniform Law Commission published the Uniform Electronic Wills Act which a few states have adopted. Starting in 2020 through this year states have also considered new laws on remote witnessing and remote notarization. To update us on these topics I am joined today by Susan Snyder, ACTEC Fellow from Chicago. Welcome, Susan.

Susan, would you mind giving us a quick background on the Uniform Electronic Wills Act?

Not a problem. The Uniform Electronic Wills Act permits persons to execute an electronic will. It allows probate courts to give those e-wills legal effect. Most documents that were traditionally printed on paper and signed on paper now can be created, signed, and recorded in electronic form, really bringing probate laws into the 21st century.

To date, which states have adopted the E-Wills Act?

So, we have Colorado, North Dakota, Washington State, and Utah who have enacted some version of the Uniform Electronic Wills Act. It has been introduced in many more states. And Florida has its own version of an Electronic Wills Act. And for more information on that, Florida statutes, ACTEC Fellow Sarah Butters recorded a previous podcast that we launched in April on the Florida statute that you can check out (Electronic Wills in Florida). So Illinois, where I am, has a version that has passed both houses and is on its way to the governor’s desk.

What are some of the features of the new Illinois law?

And then for the remote witnessing, it provides for audio visual communication between the individual signing the document and the witness. And interestingly, the remote witnessing feature is not just for wills, it’s for any document that’s executed in Illinois. And it also provides for the verification of electronic will when a petition to have an electronic will admitted to probate is filed. So hopefully the courts will become much more comfortable with that.

And then it does provide a little more information about how this law will work with Governor Pritzker’s emergency declarations regarding COVID-19 that provided for remote witnessing and remote notarization. So those are the details. It is Senate Bill 730 and it has passed both houses and we’re hoping it will soon go on to the governor’s desk (This bill was signed into law on July 26, 2021).

Illinois has also passed legislation relating to remote witnessing and remote notarization. What can you tell us about those bills?

So that is interesting as well. As part of the Electronic Wills, as I mentioned, we have the remote witnessing piece for any other document. It also – both houses have passed Senate Bill 2176, which creates the Uniform Electronic Transactions Act, which really is replacing an old electronic transactions act. Which creates a law that will jive with this new electronic witnessing law that is hoped to go into effect.

So, the provisions of that law are going to take effect July 1, 2022 or sooner if the office of the Secretary of State has adopted the rules necessary for implementation. The person who’s in the Secretary of State’s office who’s in charge of the notary public certification and all the rules related to notaries public was really wary about adopting a law effective immediately. He wanted to have time to get the rules in place on how he certifies and authorizes electronic notaries public in Illinois.

Thank you, Susan, for your timely update on electronic wills and remote execution.