Unconscionability of Premarital Agreements – Pt 1 of 2 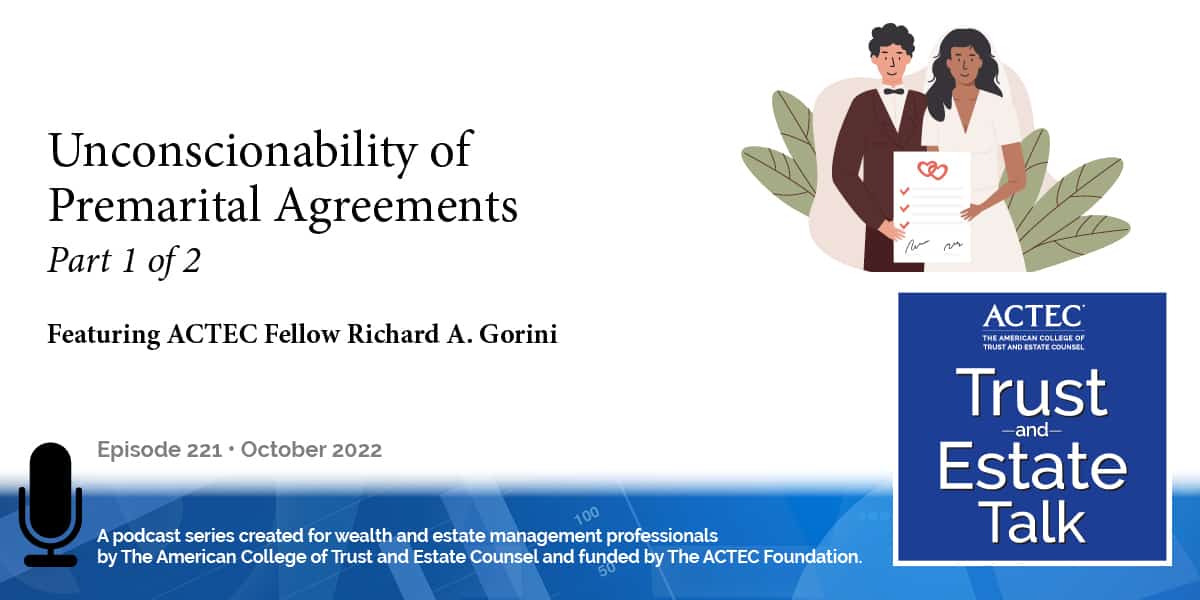 This is Lois Ann Stanton, ACTEC Fellow from Austin, Texas. Estate planning sometimes requires the creation and execution of premarital or post-nuptial agreements. Today, we are sharing part one of a two-part special on the limitations of such agreements based upon the concept of unconscionability. ACTEC Fellow, Rich Gorini, from San Jose, California will share his expertise in this area. Welcome, Rich.

Thank you, Lois Ann. Clients that seek estate planning in conjunction with a second or third marriage frequently want to insulate themselves from liability for spousal support in the event of a subsequent divorce. They’ve gone through it once, they don’t want to go through it again, they moan and groan about that. And when you’re trying to do an estate plan – and of course, it is important that these agreements be developed into an estate plan because, as we all know, you cannot give away what you don’t own. So, you need to determine what assets are owned by which spouse.

When you take a look at the Uniform Premarital Act – and I should mention that there currently are 28 jurisdictions, plus the District of Columbia, that have adopted a form of the Uniform Premarital Act – you may get a sense initially of complacency because one of the statutes provides that consideration is not required. So, you’re thinking, “Well, gee, this is a piece of cake” but it’s not quite that simple.

When you read further into the statute and particularly into case law, you find that the requirements are not as simple as you might initially think. And that is because number one, the courts have the power to determine the validity of a contract and, in this case specifically, a premarital agreement based upon unconscionability, or the lack thereof. Number two, the courts can look to the facts existing as of the date of enforcement, even if the agreement was not unconscionable as of the date of execution.

So, as planners, we want to have some sort of certainty – some sort of assurance – that what we prepare is going to be enforceable and, unfortunately, there’s no way of knowing that because the court can always take a look at subsequent facts and say, “Maybe it was fine beforehand, but it’s not fine now and we’re not going to enforce that.” So, from a practical standpoint, where does that leave us? That leaves us in a situation where we are definitely going to have to write a CYA letter to our clients and also advise our clients that, in the event of changed circumstances, that even the best premarital agreement could be rendered unenforceable.

And in that regard, I’m going to be referring to the California Statutes, at least at this first session, because I’m practicing in California, but I will mention that California has adopted the Uniform Premarital Agreement Act almost in its entirety and, so, I would submit that the analysis that I’m going to be giving you at least in this first podcast should apply in most cases where the jurisdiction has adopted that act fairly much in its entirety. So, the concern is that initially, a premarital agreement is not enforceable if the party against whom it wants to be enforced against can demonstrate a lack of disclosure of assets, lack of waiver of disclosure, or lack of imputed knowledge of assets.

That was what was in the original premarital act. And then, unfortunately, some years after that came down to two cases, namely the Marriage of Bonds– and we’re talking about Barry Bonds- and the Marriage of Pendleton. And I’ll talk about Pendleton a little bit later, probably in the second podcast. But at this point in time, what the legislature did was that they added another section that provided that the court had the power to determine whether the waiver of spousal support was enforceable based upon the circumstances at the time of enforcement.

And, in fact, they added something of an exclamation point by saying, “An otherwise unenforceable provision in a premarital agreement regarding spousal support may not become enforceable solely because the party against whom enforcement is sought was represented by independent counsel.” So, what does this mean? This means that even if you cross all your T’s, even if you dot all your I’s, even if you do everything precisely and accordingly under the law at that point in time, it still doesn’t make a difference.

And what you’re going to see in the cases that I’m going to go over is you’re going to see some very stark disparity in terms of the economic circumstances between divorcing spouses that give the court a basis for saying, “We’re not going to enforce this. We’re not going to leave one spouse out in the cold so to speak without any means of support.” So, no matter how good of a job we do at the front end, we still could find that agreement to be negated when it comes down to a divorce and the enforcement of that premarital agreement.

Thank you, Rich, and we look forward to learning more in part two.