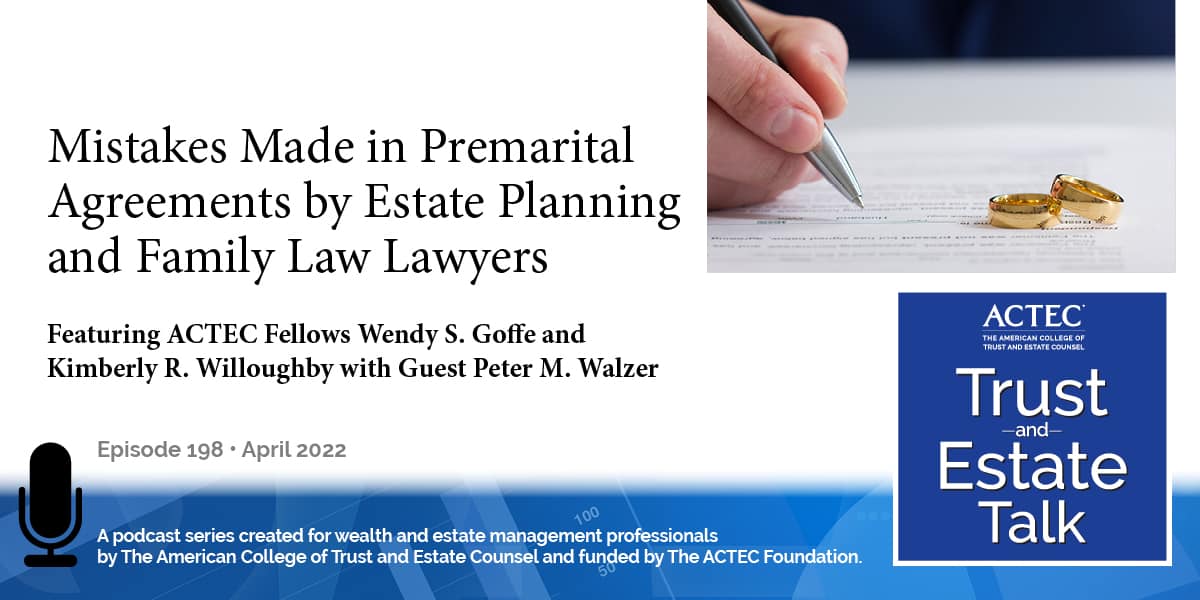 “Mistakes Made in Premarital Agreements by Estate Planning and Family Law Lawyers,” that’s the subject of today’s ACTEC Trust and Estate Talk.

This is Natalie Perry, ACTEC Fellow from Chicago Illinois. What can estate planners and matrimonial lawyers learn from each other about drafting premarital agreements?  We will learn more about this topic from ACTEC Fellows Wendy Goffe from Seattle Washington and Kimberly Willoughby from Golden Colorado. They are joined by Peter Walzer from Woodland Hills California. Peter is the past president of the American Academy of Matrimonial Lawyers. Welcome, everyone.

Another issue that family lawyers see when estate planners are the primary drafters of these agreements is that the estate planners, when they draft choice of law clauses, they believe that another state or country will enforce these choice of law clauses. Often, another state or another country will not even recognize the law of the state where the agreement is drafted in. So, it’s important that estate planners advise their clients that the agreement is only valid in their state. One of the key factors, or features, of a pre-marital and a post-marital agreement, is a limitation on alimony in these agreements. And often courts will look at the unconscionability of those agreements at the time of enforcement, or even at the time of drafting. It’s important that estate planners know the limitations on these alimony clauses.

Another issue that comes up is: keep the agreement simple so that a family lawyer or a family law judge can enforce these agreements in a family court. If they’re too complicated, they may not be enforceable. Another important issue relating to post-marital agreements, which includes any agreement between spouses, transmutation of assets, any estate planning tool where the parties reach an agreement, that they must realize that the parties need independent representation. Part of this transmutation may be reimbursement rights when transmuting separate to community property. These must be recognized and built into the agreements. Wendy, what do you think that family lawyers could learn from estate planners?

Premarital Plan not Reflected in Other Contracts

Wendy Goffe: Thank you, Peter. I have a couple of comments, but the one that I see most often is drafting provisions that apply at the death of a party in a premarital, post-marital, or cohabitation agreement, and then not following up with the estate planning lawyer to make sure that it is incorporated into their will or revocable trust. Sometimes we see provisions effective at death, but the parties don’t take into account that there will be taxes to be paid and not thinking about which party might be responsible for those payments, and not clarifying whether the payment at death is before or after taxes.

We also see agreeing to pay a percentage of the estate without taking into account the nature of the assets, their liquidity, and, again, is that a percentage before or after taxes? And similarly, agreeing to pay a lump sum without taking into account that there may not be liquidity. Entering into agreements that may take time and expense to implement. So, we might see that a trust needs to be drafted but then there’s no follow up or understanding that it’s a trust that we might not be able to put together as quickly as the parties imagine.

We see a failure to address portability issues and when we have a not first spouse or children from a not first marriage, that can become complicated. Entering into a contract to make a will without understanding the consequences of that and, similarly, creating a binding estate plan that doesn’t take into account changes in fortune and changes in wishes. So, somebody may agree to leave more money in their estate plan than they end up with at the time of death.

Not considering using life insurance as an alternative to a percentage of the estate or lump sum and not considering the party’s children from a prior marriage and thereby opening up the door to future litigation. Also, not considering court-imposed obligations to secure previous child and spousal support. And, finally, assuming that the client will review the agreement from time to time and keep it in a safe place, so when it comes time to enforce it, it can be located. Kim?

Kim Willoughby: Thank you, Wendy. Premarital agreements are the most powerful contracts individuals can enter into. It will change their marriage, it will change their families, possibly, and possibly for generations. It will affect the relationship of the people who are entering into them during their engagement, during their marriage, and if they get divorced. These agreements change how adult children understand and experience the marriage of a parent and what is supposed to come afterward.

These agreements are really pretty fraught. So, consider two things. I would say that eight out of ten times, the downside spouse in the marriage is going to regret having signed the prenup if there’s a divorce. And ten out of ten times, the divorce attorney will talk to that person about challenging all or part of a prenup. It’s not only really easy to tell when a prenup has a problem, but a lot of times it’s really easy to put a dollar value on that problem and you should be considering that, with respect to malpractice.

Many times, prenups are put together quickly and without enough thought. Estate planners don’t think about the divorce enough and the divorce attorneys don’t think about the estate planning provisions enough. So, prenups can end up with problems around interpretation and when there are disputes about prenups they’re often around how to interpret a specific clause. Good litigation attorneys can interpret any given clause at least 3 ways if there is any ambiguity. So, like Peter said, keep it simple.

Many times, prenups are put together by practitioners who don’t prepare them every day. Many times, there are unintended consequences.  Or like Wendy was saying, unanticipated events in the future that make prenups seem ill-fitting or simply very unfair if they have to be interpreted many years after the marriage. Third parties also try to enforce prenups, mainly in probate, but also in divorce court and many prenups have third party indirect beneficiaries.

So, Wendy’s comment about making sure that the estate planning actually gets done after the prenup is signed, is really important to consider. Having a collaborative relationship with an attorney in the other practice area can only make your prenup better. Natalie?

Natalie Perry: Thank you so much for educating us on these important topics today.

When to Pursue a Trust Reformation Action, Thoughts in a UTC State

Understand ways to amend an irrevocable trust under the Uniform Trust Code (UTC), including a decanting transaction from a trust and estate expert.

END_OF_DOCUMENT_TOKEN_TO_BE_REPLACED

Learn key elements that should be included in funding agreements including five essential recommendations to help them stand up to court scrutiny.