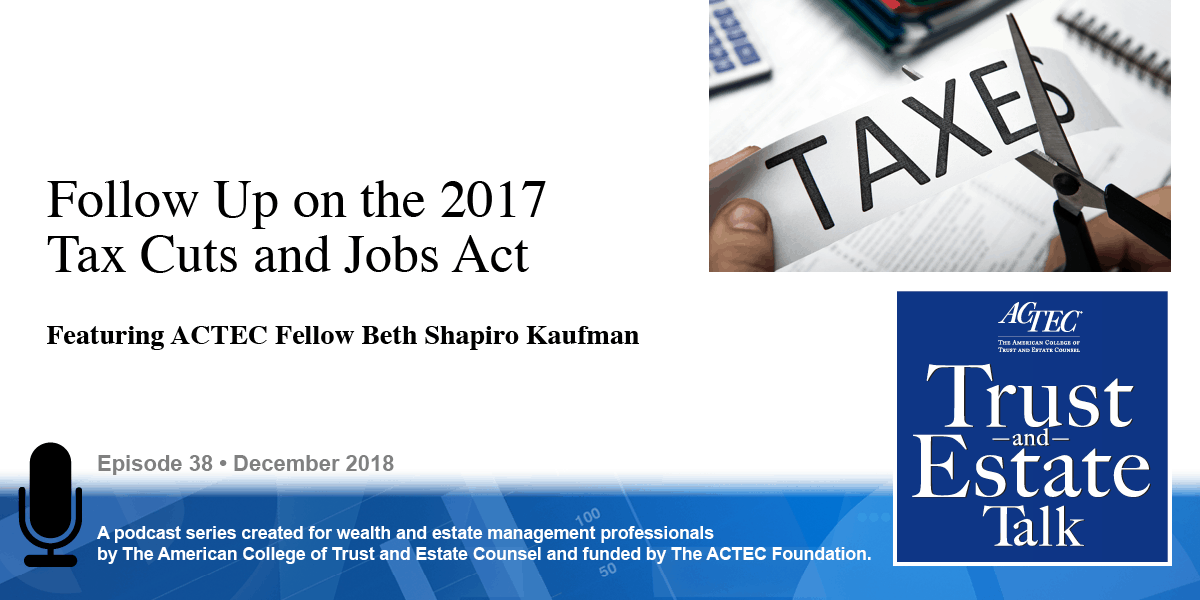 This is Susan Snyder, ACTEC Fellow from Chicago. Last year Congress enacted a Tax Cuts and Jobs Act, and there may be some follow-up legislative activity. To discuss this today you will be hearing from ACTEC Fellow Beth Shapiro Kaufman of Washington, DC. Welcome Beth.

We do. We could see follow-up activity in a number of different areas. First thing we might look for is some technical corrections. We know there are a number of issues in the drafting, everything done on short notice turns out with some mistakes in it. And normally we would expect Congress to do technical corrections at some point. Normally that’s a bi-partisan process, but I know in this go around the Democrats are feeling a little excluded from the process and therefore we might not see as much cooperation as we normally would on getting technical corrections done.

Another thing we’re looking for is a General Explanation, which is a book put out by the Joint Committee on Taxation. That could clear up some of the ambiguities in the act, such as the way that the effective date applies to the increased GST exemption.

Finally, most of the individual tax cuts in the 2017 act are temporary, they’re set to expire at the start of 2026. The House has already passed a bill to make those changes- which include the estate, gift, and generation skipping tax changes- permanent. Right now the Senate has said they’re not going to take up that bill, but after the new Congress is seated in January 2019, it might be a different story.

So, aside from follow-up from the 2017 legislation, what else might be on the horizon legislatively?

Well I would expect to see a broad range of tax bills introduced. You know we’re operating in a period of extremes and we’re likely to see bills that reflect that polarization. So, on the one hand we see bills like Senate 3503, introduced by Senator Warren. It’s basically a bill to provide for more affordable housing, but it uses a whole bunch of estate tax provisions to pay for that change. There’s nothing really new here, but it does serve as a laundry list of all the kinds of estate tax changes that we might see. So it adds a 60% and 65% marginal rate, it reduces the estate and gift tax exclusion to $3.5 million, it adds a 10% surtax on estates over $1 billion. On the front of GRATs, it would require them to have a minimum term of 10 years and a minimum remainder value of 10%. It limits GST trusts to 50 years and it tries to better align the grantor trust rules and the estate inclusion rules. Now, I’m not saying this is something that’s going to pass but it does give you an idea of what some groups in Congress might like to see done legislatively.

On the other end of the spectrum we always see bills introduced to repeal the estate tax and I would assume that we will continue to see those options introduced.

Does the increase in the exclusion level make it more or less likely that the estate tax will be repealed?

Well that’s a really good question and that’s hard to say what the overall impact would be. So, because of the increased exclusion, the amount of estate tax collected has gone down considerably. So if one objection to repealing the estate tax is the loss of revenue, when you increase the exemption level there isn’t so much revenue to be lost and that makes it easier to repeal the tax. But on the other hand, when you’ve got a tax that is only paid by the wealthiest 0.2% of the decedents dying, it can be a little politically difficult for someone to support that legislation where the benefits of the repeal flow so clearly to only the wealthiest tax payers. So it’s hard to know how those two things offset each other and how it improves or makes less likely the repeal of the estate tax.

So, thanks Beth for your legislative forecasting in the transfer tax area.