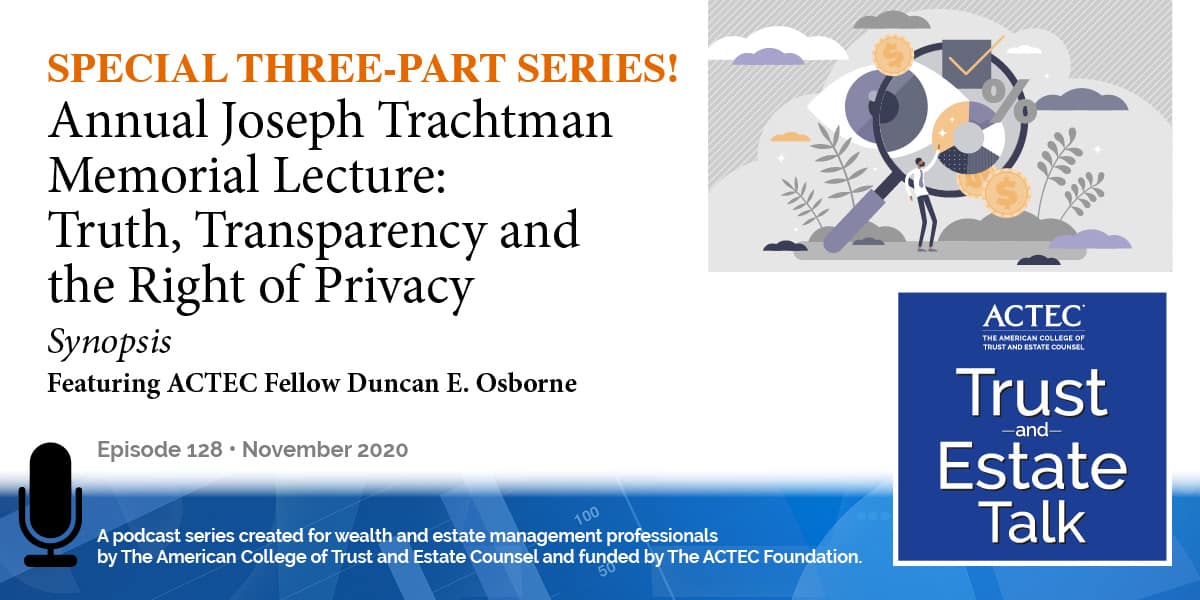 “Truth, Transparency, and the Right of Privacy,” that’s the subject of today’s ACTEC Trust and Estate Talk.

“Truth, Transparency, and the Right of Privacy is a three-part special:

This is Katherine Ramsey, ACTEC Fellow from Richmond, Virginia. Earlier this year, Past ACTEC President Duncan Osborne of Austin, Texas gave us the 2020 Joseph Trachtman Memorial Lecture on Truth, Transparency, and the Right of Privacy. In this podcast, Duncan will give us a preview of his lecture, which he will be presenting over the next few podcasts. Welcome, Duncan.

Thank you, Katherine. I have, in the past couple of years, become obsessed with the truth because it seems to me like the truth is being abused in many quarters, perhaps most specifically in the political sphere. My obsession with the truth was complemented by work I was doing for the College in its dialogue with the Financial Action Task Force (FATF), which was trying to address money laundering and terrorist financing by making specific recommendations addressing those problems. It was my opinion that the Financial Action Task Force had gone too far in some of its recommendations; that it was abusing the attorney-client privilege and was calling for transparency at greater depths than I thought was appropriate. The issue became, in my mind, what is appropriate in terms of getting the truth out there, and what is the role of transparency? And as I started thinking about that, and also thinking about it in connection with the attorney-client privilege, I became concerned that the pendulum has swung too far. That part of the lawyer’s job is to balance transparency with privacy and that there were too many influences in today’s society, not just the Financial Action Task Force but other situations where there was more transparency than was appropriate; and that led me to think about what the tech companies were doing by collecting personal data, manipulating personal data, and using it to their advantage. And so, the issue of what is appropriate in terms of private information being available versus what kinds of things really need to be kept private became a primary concern of mine; and the more I thought about what the tech companies were doing and how they were doing it, the more I felt like this was a situation that called for more scrutiny and more, frankly, regulation and legislation.

That’s a timely and compelling topic. I look forward to hearing more about it. Thank you for your introduction and we look forward to learning more from you about Truth, Transparency, and the Right of Privacy.

Listen to “Truth, Transparency, and the Right of Privacy” Part 1: What does truth mean today?