Truth, Transparency, and the Right of Privacy | Part 2 of 3 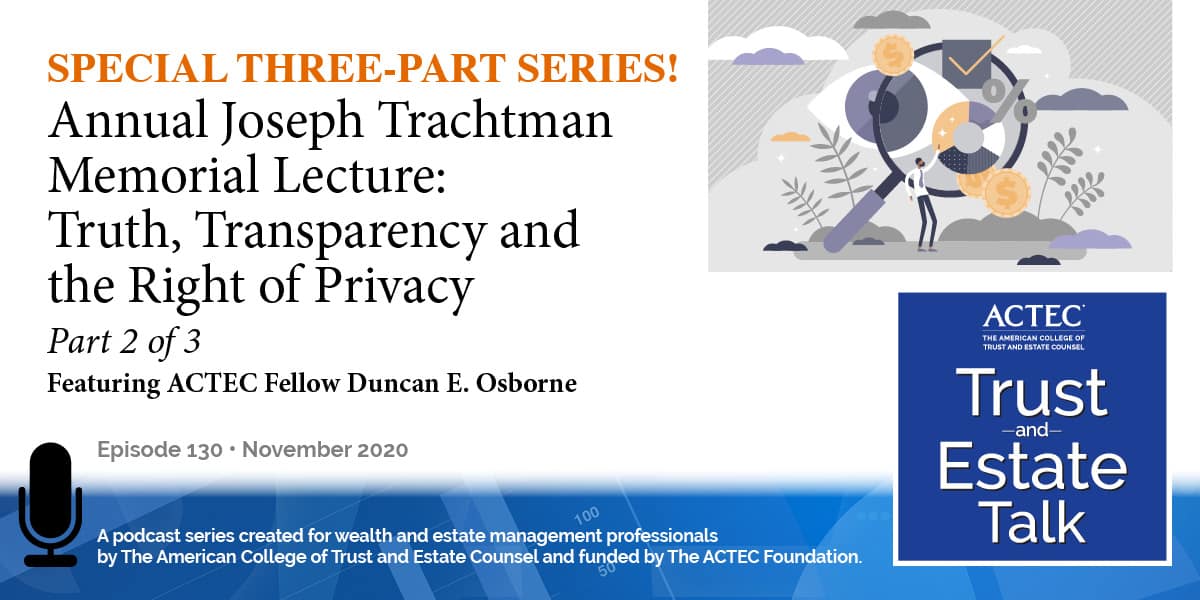 “Truth, Transparency, and the Right of Privacy” is a three-part special:

“Truth, Transparency and the Right of Privacy,” that’s the subject of today’s ACTEC Trust and Estate Talk.

This is Susan Snyder, ACTEC Fellow from Chicago. Welcome to part 2 of 3 of this special edition of ACTEC Trust and Estate Talk. ACTEC Past President Duncan Osborne, ACTEC Fellow from Austin, Texas presented the annual Trachtman Lecture in front of a live audience at ACTEC’s annual meeting in March of 2020. Our previous podcast reflected on Duncan’s understanding of “truth.” Today he will share his experiences with, FATF, or the Financial Action Task Force, and discuss transparency within the law and government.

As lawyers, we have a special relationship to balance the value of privacy against the growing chorus calls for transparency. And this is the central idea I want to convey today. My journey with this preoccupation, with truth, transparency and privacy, began some years ago.

From 2003 until 2018, I have represented ACTEC and the American Bar Association in their dialogues with the Financial Action Task Force, or the FATF, as it is known. This interaction with FATF not only covered a decade and a half, it was disjointed, complicated, and challenging. I summarize the highlights with some trepidations. The Financial Action Task Force was established in 1989 by the G7 nations, the European Commission, and eight other countries. It was created, and I quote, “To set standards and promote effective implementation of legal regulatory and operational measures for combating money laundering and other related threats to the integrity of the International Financial system.”

In 1990, within a year of its inception, the FATF issued recommendations, which were essentially a comprehensive plan of action to fight money laundering and also by dictating policy objectives and recommending legislation through which member nations must endeavor to implement and enforce. The FATF has no power to make law. However, it does have the commitment of its member nations. And as a consequence, it has the ability to exert considerable political pressure with a lot of success. Many of its recommendations have been enacted into legislation.

In October 2001, following the September 11 terrorist attacks, the FATF’s mission was expanded to include the fight against terrorism. Clearly, an important and commendable revision to its mandate. And FATF quickly added recommendations to specifically address terrorist financing.

The FATF, shortly thereafter, initiated a series of meetings beginning in 2004 to engage these non-financial businesses and professions, including lawyers, in the money laundering and terrorist financing dialogue. In that year, the leadership of ACTEC asked me to attend one of these meetings. ACTEC had been invited to the meeting because the FATF was convinced that the preferred tools of money launderers were trusts. Indeed, one of the most prevalent and potentially dangerous tools of money launderers were trusts. Maybe, maybe not.

The main objective of these meetings was to have these specifically identified businesses and professions adopt and implement the core anti-money laundering rules that had been imposed on financial institutions.

On this slide are the FATF’s 2003 recommendations. I will spare you the jaw-dropping, stomach-churning reaction that overwhelmed me as I sat there listening to these pronouncements. With literally a jeweler on my left and a lobbyist for the casino industry on my right, I was stunned. What FATF was proposing was fundamentally disruptive to the attorney-client relationship at its most basic level, at least as we understood it in the United States. Their proposals were an unabashed intrusion into a private confidential relationship.

The American Bar Association expressed this policy of strong opposition to the concept of lawyers filing suspicious activity reports on clients. These recommendations were seen as undermining the core duties to clients, the duty of loyalty, the duty of confidentiality, the attorney-client privilege, not to mention, the Sixth Amendment Right to Counsel.

Let me put this in historical context. Since 1776, we in the United States have been pre-occupied with the protection of the individual. What was our revolution all about, if not oppression by the state? No taxation without representation reflects the fact that the colonists were being abused by the state.

Nevertheless, Fellows from ACTEC continued to attend and participate in subsequent meetings. Because of the very high level of suspicions with which trusts are regarded by the FATF and the resulting high level of scrutiny of trust structures, ACTEC has been proactively involved in the FATF process. In 2007, FATF met with representatives of the non-financial business and professional sectors, including lawyers, to determine if they would be willing to engage in a collaborative effort to develop risk-based guidance for their professions.

Lawyers agreed to do so, and following efforts in 2008, FAFT issued a separate risk-based guidance paper for lawyers. During the negotiations with the FATF over this guidance, representatives from the United States continued to emphasize the importance of ensuring that any risk-based guidance not undermine the essential components of the attorney-client relationship.

FATF’s emphasis on greater transparency goes beyond their attempts to pry into the attorney-client relationship. The FATF also believes that law enforcement has an unrestricted right to know the individuals who are the owners and beneficiaries of every corporation, limited liability company, limited liability partnership, general partnership, trust and any other entity or arrangement permitted by statute or common law. The premise is that with total transparency of all entities and relationships, law enforcement will be much better armed to prevent money laundering and terrorist financing. To accomplish this result, in 2012, FATF launched its push for public registries — a beneficial owner of all legal entities and arrangements. Of course, no criminal is going to comply with this mandate. Straw men and women and other false information will be the norm for nefarious players.

I tried to imagine what FATF thought was going on. Maybe it is something like this:

“Yes, yes with whom am I speaking?”

“Yes, this is Pablo Escobar. Yes, Escobar, E-S-C-O-B-A-R. Yes, I am calling you from Medellin, Columbia. That is right, it is in South America. Well, I would like your help in forming a Delaware LLC. You need a name for the LLC? How about laundromat? Yes, that is what we do. We launder, we cleanse, we wash. Yes. You think somebody from Panama may already have laundromat. Well, let me think. What about Drugs R Us?”

Does FATF seriously believe that drug lords are so dumb? I have spent a little bit of time researching the drug cartels, and while the drug lords are ruthless and cruel beyond our wildest imaginations, they are not stupid.

Furthermore, the requirement of public registries imposes an unfair burden on law-abiding citizens and makes their data vulnerable to abuse. Once governments and law enforcement agencies around the world have collected all this data on beneficial ownership of all entities and arrangements and put it in a public registry, there it is on a silver platter for your neighborhood hacker. But despite the idiocy of this proposal, many countries have nevertheless complied with this mandate. That tells you something about FATF’s power to influence. To state it bluntly, I think this was a stupid, ill-conceived proposal. I should add that I am very critical of the FATF process itself. In these meetings, the agenda and the dialogue were carefully orchestrated. There was very little meaningful back and forth.

FATF seemed to want to give a pretense of collaboration, when in fact, decisions and conclusions were foregone. In many aspects, this was a charade. By now, you have sensed that when it comes to the FATF, I may have an attitude. However, despite my years long frustrations with the FATF, I have tried to work to see their point of view. As I said a minute ago, I think public registries are the result of harmful wrong-headed thinking. On the other hand, some positives have come from my interactions with the FATF.

In addition, the United States has passed legislation to implement some of its recommendations. The Bank Secrecy Act, as amended by the USA Patriot Act, takes significant steps toward implementation of the recommendations on financial institutions. In addition, the ABA has produced the “Voluntary Good Practices Guidance for Lawyers to Detect and Combat Money Laundering and Terrorist Financing.”

Many seminars have been conducted to publicize this document, and importantly, enlighten attorneys to the risk of money laundering and terrorist financing. In addition, currently working its way through the ABA House of Delegates is Resolution 119. This Resolution supports the idea that in certain circumstances, the beneficial ownership of entities should be available to law enforcement. Furthermore, efforts are being made to address a lawyer’s duty to know your client by amendments to the model rules. In my opinion, this is an appropriate place for more transparency.

This concludes part two of three in our special ACTEC lecture Truth, Transparency and the Right of Privacy. Please join us for the last episode in the series, which will discuss the attorney-client relationship and an individual’s right to privacy. Thank you for listening to this podcast.