An Introduction to Charitable Pledges 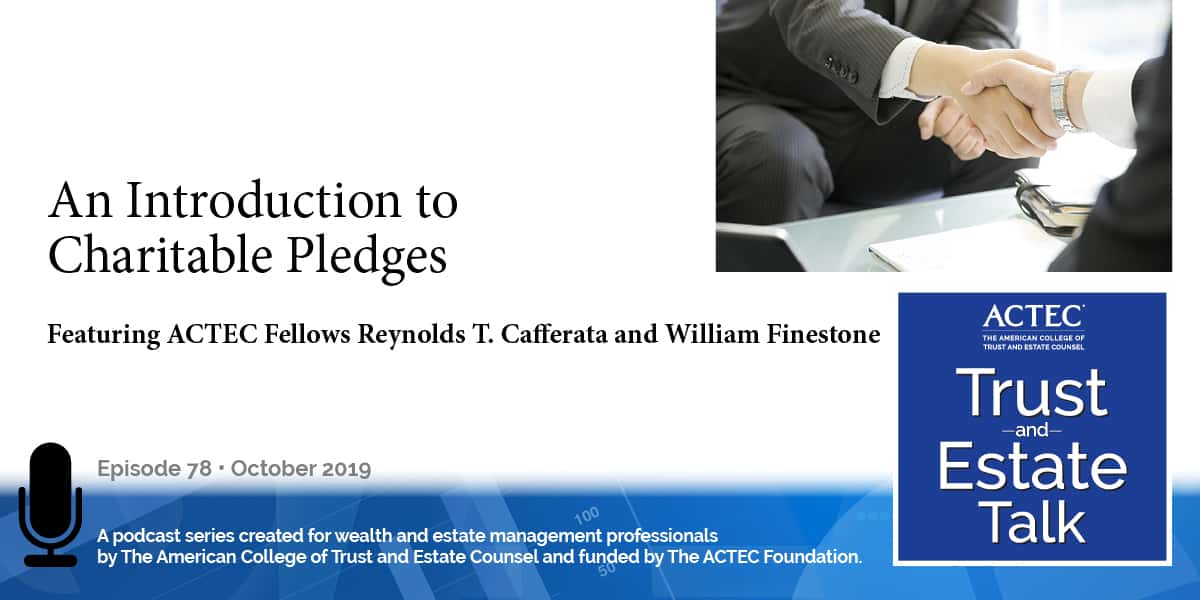 “An Introduction to Charitable Pledges,” that’s the subject of today’s ACTEC Trust and Estate Talk.

This is Susan Snyder, ACTEC Fellow from Chicago. To educate us today on charitable pledges, you will be hearing from ACTEC Fellows Reynolds Cafferata and Bill Finestone, both of Los Angeles. Welcome, Bill and Reynolds.

Thank you. The first question would be, is the pledge enforceable? This is a matter of state law. In order to be enforceable, it generally must have consideration or detrimental reliance or public policy. The consideration need not be of equal value. For example, the charity may promise to name a building after the donor because of the pledge–that is sufficient consideration. Detrimental reliance involves the charities or other donors’ reasonable and substantial reliance on the pledge, which the pledgor should have expected so that the pledge must be enforced, at least to the extent necessary to avoid injustice. For example, a donor may encourage a charity to contract with an architect to do some building plans and promise to pay the architect’s fee. If the charity does contract with the architect and incurs a legal obligation, now the donor’s pledge is binding and enforceable, even though the donor didn’t receive anything in return. Another example would be a donor’s matching gifts. A donor may promise to pay $100,000 to a charity if the charity can raise an additional $100,000. The charity communicates this matching pledge and donors are encouraged and rely on the fact that each dollar the donor gives will result in $2 to the charity, and if the charity does raise $100,000, now, the donor’s pledge is enforceable. A few states enforce pledges without consideration or detrimental reliance as a matter of public policy.

For example, I believe Alabama, Indiana and New Jersey do so. And, in Pennsylvania a pledge is enforceable if the pledge states that the pledgor intends to be bound by the promise.  A binding pledge is a pledgor’s debt and the charity’s asset non-binding pledge simply is an expression of current intent. An oral pledge may be enforceable, but they are difficult to prove and in the precise terms are very difficult to establish as well. In addition to those factors, the charity must be sure that the person making the pledge has the legal authority to do so. If you are receiving a pledge from an entity such as a corporation, partnership or LLC, you probably should review the internal governing instruments of that entity to make sure that the person who is pledging — signing on behalf of the entity — has the authority to do so, and that the entity has the authority to make the pledge. Similarly, with respect to trusts, you should review the trust to be sure that the person signing is the trustee and the trustee has the authority to make the pledge. Agents may have authority to execute pledges if authorized under state law. For example, an agent under a durable power of attorney or a guardian or a conservator. If it’s a community property state that’s involved, then both spouses probably should sign because in some states such as California, neither spouse can give community property without the written consent of the other spouse. This is true even with respect to the donor’s one half interest in the community property, so both spouses should sign. Assuming we have or do not have an enforceable pledge, which would we prefer? Reynolds?

So, let’s look at whether or not to make the pledge enforceable and start with the donor’s perspective. The main reason that a donor would make a pledge enforceable is if the charity is providing something in return for that pledge. That usually is a naming opportunity, recognition at a particular level of giving within the organization or naming on a building or a room within a building or something like that. Oftentimes, unless the charity is assured that they will receive the gift, they are not willing to put the donor’s name up. Another reason somebody might make a pledge enforceable is it, in theory, could simplify their estate planning, that if the pledge is in fact enforceable, then the charity can collect that money at the donor’s passing, even if the donor didn’t change their will or trust. This really isn’t the best way to make a testamentary gift because it’s much more complicated for the charity to pursue the gift that way, but in theory that is a benefit of having the enforceable pledge. Other than that, having the pledge be enforceable does not give the donor any current tax benefits. Any tax benefits associated with the gift are going to occur when the payment is actually made. So why might a donor not want to make a pledge enforceable? Well, first of all, if the pledge is enforceable and you don’t pay, the charity could sue you. And, you might be forced to pay and maybe you have good reasons for not wanting to pay at that point. Either you have become dissatisfied with the organization or you have had a significant change in your financial circumstances.

From the Charity’s Perspective

From the charity’s perspective, there are benefits and detriments to having enforceable pledges as well. Let’s start with the benefits. If the pledge is enforceable and the donor decides not to pay, then the organization does have the opportunity to sue and possibly collect on that pledge. Those are difficult cases to win. They also can look bad from a donor relations perspective to see a charity out there suing a donor but it, in theory, is an opportunity. The second place that the enforceable pledge is helpful for the charity is if the donor passes away before all of the payments are completed, then the charity can file what’s known as a “creditor’s claim” in most states, and have that pledge paid out of the estate. This is assuming that you have an executor or, if they have a living trust, a trustee who is sympathetic toward the charity, then this isn’t the same as having to go file a lawsuit but gives them a legal basis to make that payment and will entitle the donor’s estate to an estate tax deduction for paying off the debt. The other benefit to the charitable organization is that for financial statement purposes, if it’s an enforceable pledge, then they can book the pledges and asset when it is received.

So, what are some of the reasons that the charity would not want to have the pledge enforceable? Well, one issue that can come up is the donor decides, for whatever reason, they don’t want to or they can’t honor the pledge and the charity does not want to sue the donor. In that circumstance, if it’s an enforceable pledge, the charity potentially has a fiduciary issue to justify why it is they are not collecting on that asset. In addition, if the person who made the pledge is an insider with the charitable organization, such as a director or officer of the charity, then the charity has to consider whether they potentially have an excess benefit transaction:  that they are relieving the donor of a legal obligation to pay a certain amount and the donor is not providing any payment in consideration for that relief. Other issues that come up with the charitable organization is that if the donor wants to satisfy the pledge with their private foundation, it’s often the charity that has to provide them the bad news that they cannot use their private foundation at that point to pay the pledge. The charity will often end up trying to work out the complicated rules for using the Donor Advised Fund to pay off the pledge, and also the charity is often put in an awkward situation if some other individual is satisfying that pledge, and again, explaining these rules to the donor. Unless the charity believes that it likely would want to pursue the pledge in a legal case, it often is better off having the pledge be a letter of intent that is not binding.

Thanks, Bill. Thanks, Reynolds, for educating us on the rules around charitable pledges.