An Introduction to Individual Charitable Deductions 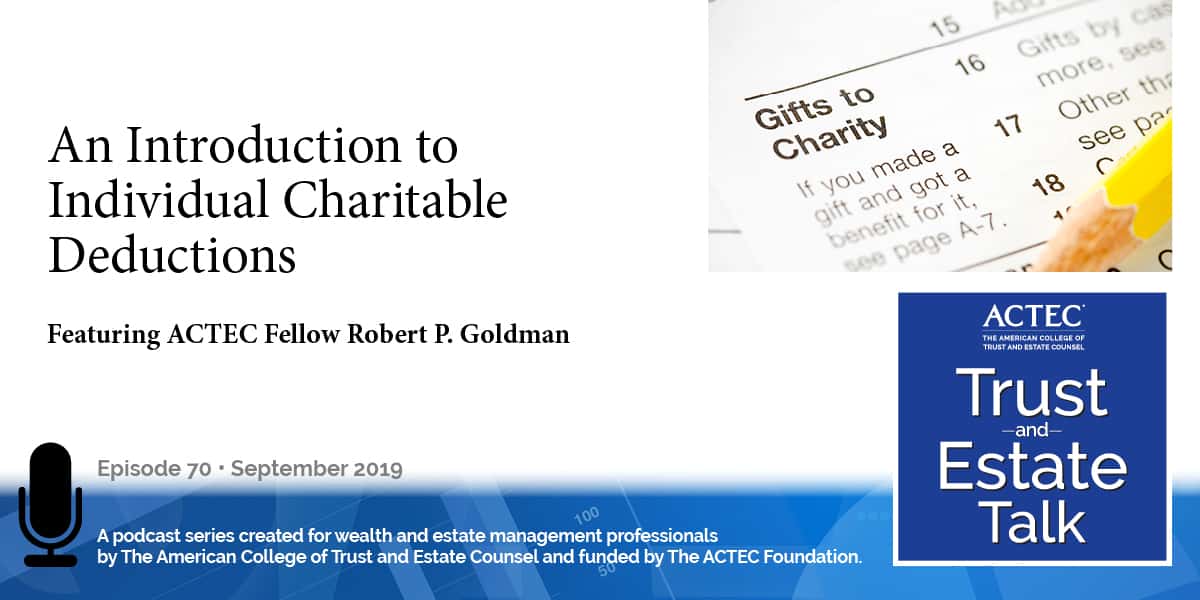 “An Introduction to Individual Charitable Deductions,” that’s the subject of today’s ACTEC Trust and Estate Talk.

This is Natalie Perry, ACTEC Fellow from Wheaton, Illinois. To give us an introduction to the rules that govern individual charitable deductions, you will be hearing today from ACTEC Fellow Bob Goldman of Salem, Massachusetts. Welcome, Bob.

Thanks. Today I am mostly speaking about the income tax charitable deduction for individuals. There is also a gift tax and an estate tax charitable deduction, and generally the requirements are the same. We have to make a contribution to or for the use of certain kinds of organizations. Generally, a corporation or a trust that has been organized and operated exclusively for religious or charitable or scientific or literary or educational purposes. There are some other categories as well. Generally, you know a charitable organization when you see it.  It certainly includes social service organizations, cultural organizations; a lot of these organizations fall into the category of educational. No part of the net earnings of such an organization can benefit a private shareholder or individual.

Indeed, the standard deduction for single filers went from $6,350 to $12,000, almost doubled. And for married filers, it went from $12,700 to $24,000, again, almost doubled. So, for these married filers for example, they would need itemized deductions including charitable deductions in excess of $24,000 before they would ever consider itemizing rather than just taking that standard deduction. And further, the Tax Cuts and Jobs Act reduced the ability to use other historic itemized deductions. There are now limitations on deducting your mortgage interest, limitations on deducting your state and local taxes and because of this, the standard deduction is just going to be more attractive to yet more people. Well, Congress did not want us to be able to wipe out our taxable income with the charitable deductions. So, when we are itemizing, we are going to be able to take charitable deductions only subject to limitations.

If you are giving a cash gift to anything other than a public charity, then your deduction is going to be limited to 30 percent of your adjusted gross income in any one tax year. And when aggregated to cash gifts you made to a public charity, your total deductions still have the historic 50 percent limit. It’s complicated.

Meanwhile, if you are giving long-term capital gain property to a public charity, that kind of contribution is limited to its deductibility in any one tax year to 30 percent when given to a public charity of your adjusted gross income. Again, when aggregated to those cash gifts you made to public and non-public charities limited in the aggregate to 50 percent. And finally, long-term capital gain property when given to non-public charities limited to 20 percent of your adjusted gross income.

Now, there is another limitation and that has to do with whether your gift is deductible at its fair-market value or whether you are limited to deducting only your basis in the property. And, of course, for many donors a deduction limited to basis in property is a non-starter. That’s of little interest to them. So, we have to pay careful attention to these rules.

Generally, when giving to a public charity of long-term gain property, you get to deduct the fair-market value, but when giving to a non-public charity, you are going to be limited to your basis in the property. And that has one important exception, which is that gifts of publicly traded securities, marketable securities, long-term gain assets can be donated to a private foundation and other non-public charities with a fair-market value deduction.

A few other things to know about the deduction, you need to have a contemporaneous receipt from the charity if your gift is over $250. So, you are simply not allowed your deduction and could easily be denied on audit if you don’t have in your own files that receipt. Also, you get no deduction for what are known as quid pro quo contributions. If you are getting any benefit back from the charity, you can’t deduct the value to the extent of the benefit and the charities are required to tell you on their contemporaneous receipt whether they provided you with any goods or services in return for your contribution and the value. Other things that we need to keep in mind are that if you are giving property, you may be required to have an appraisal, what’s known as a qualified appraisal from a qualified appraiser. So, you will want to check out those rules. If you are above a certain value, you are going to need a qualified appraisal and submit a Form 8283, which is really a summary of the appraisal, not the full appraisal itself, but you have to attach the summary to your income tax return.

Thank you, Bob, for educating us on rules around charitable income tax deductions for individuals. That was great.