The Future of Digital Assets and the Dollar 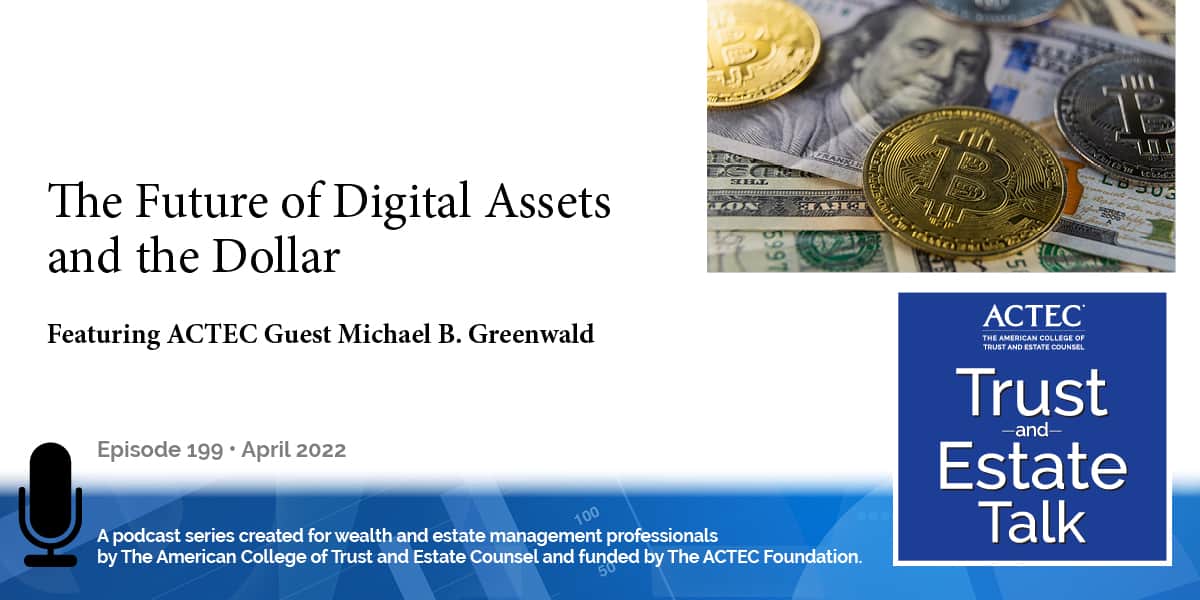 “The Future of Digital Assets and the Dollar,” that’s the subject of today’s ACTEC Trust and Estate Talk.

This is Travis Hayes, ACTEC Fellow from Naples, Florida. The financial order, as we know it, is changing and evolving, especially in light of current world conflicts. We are ushering in a new future where the U.S. dollar will be living alongside digital assets, including cryptocurrency. We will hear more about our financial future today from guest Michael Greenwald, a senior executive of Amazon Web Services, who is speaking with us in his personal capacity. Michael was previously with the U.S. Treasury and served as a Financial Attaché to Qatar and Kuwait from 2015 to 2017. He also held counterterrorism and intelligence roles with the U.S. Treasury. Welcome, Michael.

Structural Advantages of the Dollar

Great to be here, thank you for having me. U.S. Dollar dominance has underpinned American economic and geopolitical leadership since World War II, and really, there’s no stretch to say that Washington’s strong hand in trade relationships, military power, and global alliances depend on the dollar’s preeminence. And, this structural advantage, however, will begin to crumble over the next several years unless the U.S. government and the private sector prioritize a central bank digital currency, but also the future where the dollar will live alongside decentralized finance- like Bitcoin, like Ethereum, like Blockchains, like Avalanche- with stable coins that are backed to a fiat currency. And, just a few years ago this concept seemed really fanciful, but now nations are adopting central bank digital currencies.

You’re seeing over 100 countries explore a central bank digital currency. China is out in front. And, I think that the United States, now with the Digital Asset Executive Order, is going to look at what would a digital dollar look like in the United States? How does the dollar innovate? Because what we’ve seen up to this point in leading into the Ukraine-Russia conflict, is that dollar dominance has been the central focus of U.S. and economic foreign policy. That’s what led us to the Iran deal. That’s what led us to 2014 with Russia in Crimea. That’s what has been our policy with North Korea. That’s what we’ve done with trade relationships in China.

Dollar Dominance in the Crosshairs

Now we are in a new era. We’re in an era where the dollar is in the crosshairs of central bank reserves, and we are in an era where a basket of currencies environment is no longer something in the distance. We’re dealing with it now. And one point to look at, a data point, is that central bank reserves in dollars 25 years ago was in the low 70%. Today, it is below 60%, which means that countries are still looking to work with the dollar, but the consumer wants more choices.

Digital Dollars: Securing US Leadership in the Future

The consumer wants a basket of currency. And so, complacency is the kryptonite of the dollar. To preserve its strength, U.S. policymakers must prioritize dollar innovation, not only as a key national security objective, but a competitiveness objective on power with this new competition strategy. And this dollar innovation, where we’re living among many digital assets– it must be built on confidence and trust, and proactivity that really secures the U.S. leadership of the global monetary system.

Digital Wallet: Securing the Foundation of the Future Financial Order

So, I envision the future digital wallet to have Bitcoin, Ethereum, stable coins like Circle and Paxos, and also central bank digital currency, where the consumer like never before will have more equity, will have more financial inclusion, will have more ownership. Where the plumbing of the financial system will be quicker, will be less expensive. And there will need to be privacy and cyber controls built-in so that competitors — like China and Russia — are not part of this financial sector. Because this new era of the financial order, following Ukraine-Russia, will see countries like China, Russia, Iran, and other authoritarian governments creating their own financial order, where the G7 like-minded countries of the U.S. and others, will have their own financial order. And that is where we are headed. And that’s where the consumer will work alongside the dollar and other digital assets.

Travis Hayes: Thank you, Michael, for educating us about the future of digital assets and the dollar.