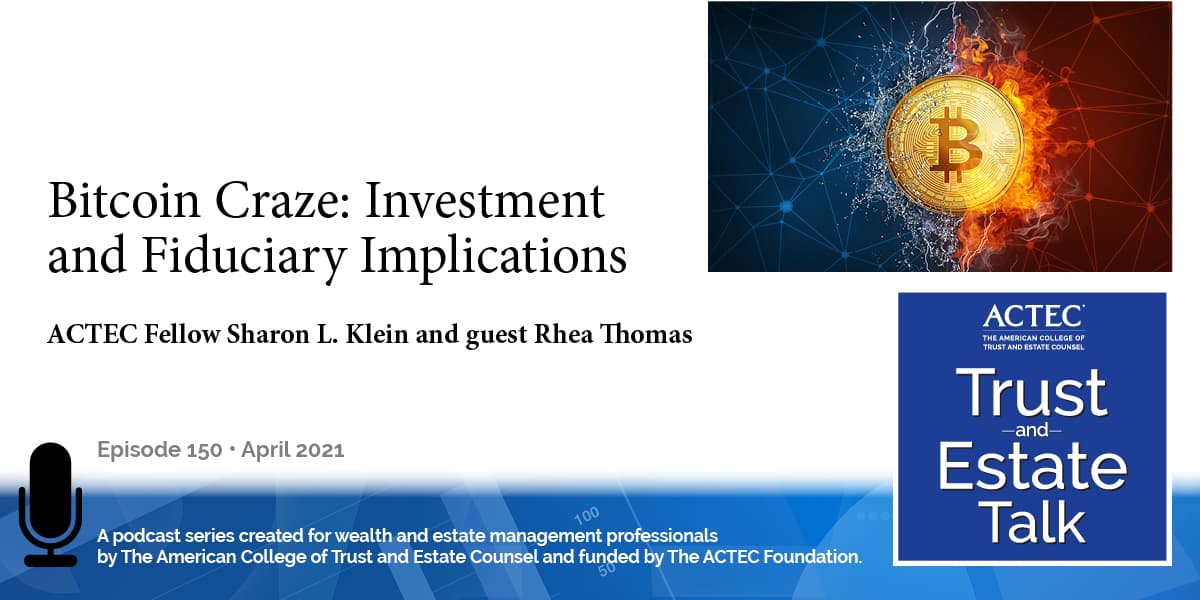 This is Ed Beckwith, ACTEC Fellow from Washington DC. A hot topic in the news these days is Bitcoin as an investment. But how does it impact a trustee’s responsibilities? To learn more about this topic, you’ll be hearing today from ACTEC Fellow Sharon Klein of New York City and guest Rhea Thomas, Senior Economist of Wilmington Trust. Welcome, Sharon and Rhea.

Thank you very much. Rhea and I look forward to discussing a very hot topic that’s constantly been in the news, which is Bitcoin. So, first Rhea is going to address how we think about Bitcoin from an investment perspective. And once we have that foundational investment viewpoint, I will then discuss fiduciary considerations around investing in Bitcoin in trust portfolios. So, Rhea, let’s start off by asking, why has Bitcoin been so prominent in the headlines recently?

Bitcoin in the News

Thanks, Sharon. I’m happy to be here today. Well, Bitcoin has been at the center of investor and media attention in recent months because of eye-popping returns over the last few years. In 2020, for example, while the S&P 500 posted a very strong 16 percent return, Bitcoin rose by over 300 percent; and that followed on a 92 percent return in 2019 when the S&P 500 rose by just 29 percent. And the differential in returns is just as striking if you compared to, say, the US dollar or gold. And so far, 2021 appears to be on a similar trajectory.

Well, Rhea, my next question then, has to be, what’s driving the recent rise in Bitcoin’s price?

Well, Sharon, there are a number of factors. But I’ll touch on four key drivers of demand that make this rally different than the ones we saw back in 2017. First, macroeconomic reasons for owning Bitcoin have really intensified in the wake of the pandemic. Concerns about inflation have been rising, given the unprecedented amount of monetary and fiscal stimulus. And investors have turned to Bitcoin as an inflation hedge given its limited supply. Bitcoin has also benefited from improving investor risk appetite as the economy has started to rebound from its pandemic load.

A second factor to consider is the fact that investor interest has really broadened beyond its traditional retail base to institutional investors with several high-profile corporations like Tesla and Square as well as traditional asset managers like BlackRock, and various hedge fund managers all announcing current or potential investments in Bitcoin. And one of the factors encouraging that institutional interest has been an improvement in the underlying infrastructure of the Bitcoin market in recent years with new regulatory guidance, growth of the derivatives market to allow for hedging and increased involvement from established financial institutions in the crypto custody space.

And finally, several traditional payments companies like Visa and MasterCard have indicated plans to support cryptocurrencies, which is a step toward further normalization. Additionally, PayPal’s announcement in October of last year, allowing users to buy, sell, and hold cryptocurrency as well as plans to eventually allow users to pay merchants using crypto, was notable. We’re still really in the early stages of this. But this could potentially pave the way for broader retail use down the line as a form of money, which in turn could foster additional underlying fundamental demand for Bitcoin.

And all of this increased demand is really coming at a time when supply growth is slowing. So, the new creation of Bitcoin is decelerating by design of Bitcoin’s algorithm, which was constructed to cap total supply at 21 million Bitcoin. And investor holding periods also appear to be lengthening, with measures of existing active supply of Bitcoin being traded on exchanges slowing notably between 2018 and 2020. So, this combination of increased demand and falling supply has really supported Bitcoin’s recent price rise.

Well, that’s really interesting. Thanks, Rhea. So, can you summarize for us what all that means in terms of thinking about Bitcoin as a long-term investment?

Bitcoin as a Long-Term Investment

That’s a good question. While all of these recent developments are promising and do suggest that cryptocurrencies are here to stay and grow in prominence, there are a number of reasons Wilmington Trust is not recommending Bitcoin as a long-term investment in portfolios right now. First, the outsized returns of Bitcoin come with significant volatility on the order of five to ten times that of the S&P 500 in recent years. Second, while Bitcoin is the most dominant cryptocurrency by market cap and also the longest standing, its leading position can’t be taken for granted given the sheer volume of competitor cryptocurrencies out there. There are roughly 8,500 of them right now, and 1,800 of them have failed in the past.

There is also significant competition coming from stable coins, which are digital currencies that are backed by traditional currencies.  Facebook’s Libra is an example. Central Bank digital currencies could also diminish demand for Bitcoin if they become widely adopted.  Nearly 86 percent of central banks are in the process of researching or developing one right now, with China one of the furthest along in this process. Security issues also remain a concern. The SEC [Securities and Exchange Commission] for example, has so far rejected all US Bitcoin ETF [Exchange-Traded Funds] applications to date in part because of concerns about market manipulation and fraud. Regulation is another reason. It is likely to be necessary given the security concerns I mentioned earlier and will eventually be a support for further institutional adoption. But given the uncertainty around dimensioning how that regulation will look, this still remains a reason for caution.

Finally, environmental concerns could also constrain wider adoption of Bitcoin given the energy intensiveness of the mining process. The system currently consumes more energy in a year than the entire country of Argentina, for example. So, that in a nutshell, is why we do not think Bitcoin is ready for client portfolios just yet. But we will continue to monitor Bitcoin’s progress closely. So, Sharon, from a fiduciary perspective, how should be think about Bitcoin and the implications for trust portfolios?

Bitcoin from a Fiduciary Perspective

Well, that’s interesting because from a fiduciary perspective there are additional considerations when assets are earned in trust. And the foundational question for trustees is whether a trust investment strategy complies with the Prudent Investor Rule. The Prudent Investor Rule is the law that governs the investment of trust asset. It’s been enacted in a vast majority of states, and it’s the yardstick by which trustees are judged. The key tenet of the Prudent Investor Rule is that trustees are required to pursue an overall investment strategy that has risk and return objectives that are reasonably suited to the trust at hand. That means having regard to the particular circumstances, including factors like economic conditions, tax consequences, the size and the duration of the trust, but very importantly each investment within that overall strategy is not viewed in isolation. And that may be key for an asset like Bitcoin, which, as Rhea said, might be very volatile when looked at in isolation, but perhaps at some point in the future, may be appropriate within the context of a broader investment strategy.

The good news for assets like Bitcoin is that under prudent investor principles, trustees are authorized to invest in any type of investment. So, there is no investment that’s inherently imprudent or improper as long as, and this is the key point, as long as the investment is designed to help achieve the overall strategic objective of the trust. So, Bitcoin is not per se prohibited.

What is the bottom line? Well, like the old adage that there’s nothing new under the sun, the analysis is really the same. Whether we’re talking about Bitcoin or whether we’re talking about any other type of asset. Because no investment is per se prohibited, the question as to whether you can invest in Bitcoin in a trust portfolio is going to depend on all the facts and circumstances and an analysis as to whether an exposure to Bitcoin within the trust overall investment strategy has risk and return objectives that are reasonably suited to the particular trust. Trustee responsibilities also include documenting that trust strategy and periodically revisiting it to determine that is still appropriate.

Now, having said that, there may be some strategies trustees might want to consider if it does become appropriate to invest in Bitcoin in trust portfolios, so called protective strategies, if you will. So, the trusts that are in the drafting phase, you might consider adding provisions to the trust document to make it clear that trustees should consider digital assets if that’s what the grantor wants, a permissive provision like being able to retain a concentrated position. That kind of permissive language is probably not strong enough language to give trustees complete confidence in relying on it if beneficiaries do suffer, but it may be helpful language to have in there.

If you’re dealing with an existing trust that doesn’t have those provisions. You may want to consider a technique like decanting or judicial modification to add them in. You may want to consider getting agreements or releases from the family for investing in an asset like Bitcoin and revisit those agreements periodically. If beneficiaries have different views, you may want to split trusts pursuant to a trust document or state law so that you can invest trusts differently for different beneficiaries. But maybe the best solution is to do a directed trust under the laws of a jurisdiction that permits it. That’s a technique that’s commonly used for concentrated or risky assets where you would direct the trustee to hold the Bitcoin, so the trustee doesn’t have any responsibility or liability for that asset. So, in conclusion, there’s a lot to think about. The good news is that the Prudent Investor Rule is timeless, and it can evolve with the latest strategies, including Bitcoin.

Thank you, Sharon and Rhea, for educating us on the Bitcoin craze:  investment and fiduciary implications.