The Future is Here: Dealing with Bitcoins and Cryptocurrencies in Tax and Estate Planning 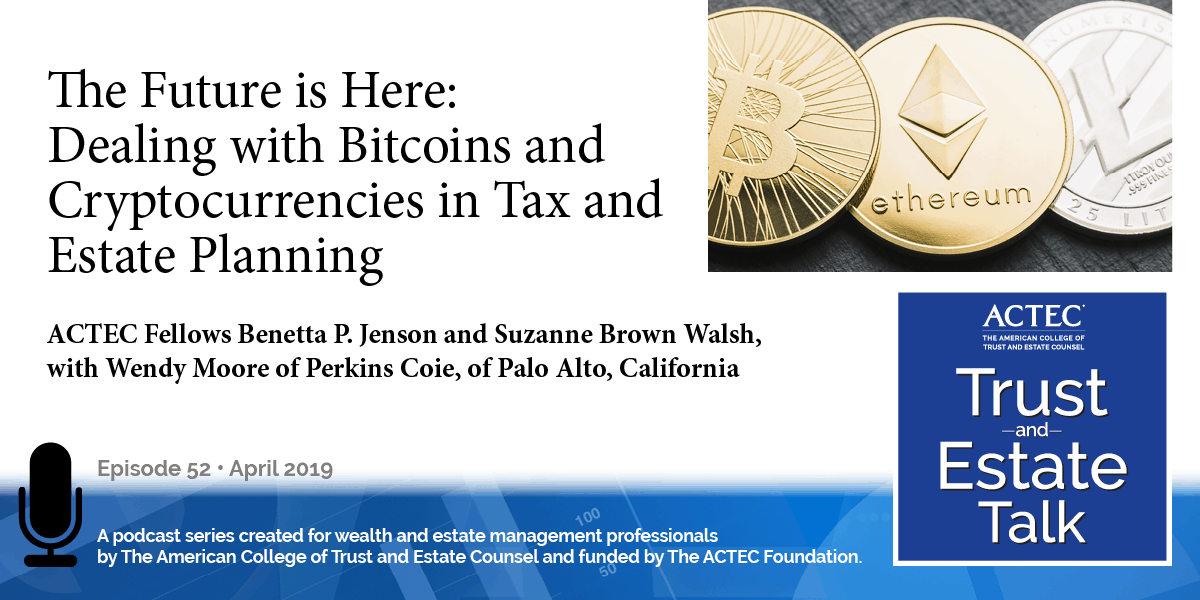 “The Future is Here: Dealing with Bitcoins and Cryptocurrencies in Tax and Estate Planning,” that’s the subject of today’s ACTEC Trust and Estate Talk.

This is Natalie Perry, ACTEC Fellow from Wheaton, Illinois. Did you know that there are over 2000 different cryptocurrencies? If a client asks you about hot and cold private key storage would you know what the client meant? To give us an explanation of Bitcoin and other cryptocurrencies, you’ll be hearing today from ACTEC Fellows Benetta Park Jenson of Chicago, Suzy Brown Walsh of Hartford, and Wendy Moore of Perkins Coie.

This is Suzy Walsh, and we talked earlier today about why estate and trust attorneys should care about cryptocurrencies. One of the statistics we cited was the market cap. The total market cap of all the cryptocurrencies has been as high as 800 billion dollars’ worth of B, and currently is about 138 billion dollars. Perhaps more important than that, the largest online wallet and exchange provider, Coinbase, reported that it had 13 million users in November of 2017. The largest provider of free wallet software, Blockchain.com, hit 25 million wallets. Those numbers don’t sound huge, unless you look at the numbers for traditional account holders of traditional securities accounts. TD Ameritrade has about 11 million accounts and Charles Schwab has 9 million accounts, again, compare that to Coinbase which has over 13 million users.

Now, Wendy Moore actually works with several hundred of the two-thousand issuers of digital assets and so she is going to talk about how this plays out in the real world.

I think that this is probably one of the most significant changes that you will face as a trust and estates lawyer – is moving to a world where the assets that your clients have are not held, or protected by, the trusted intermediaries and central financial institutions that you are accustomed to working with. In fact, the movement toward the use of smart contracts on blockchains that run on a distributed ledger technology is such that there may be an artificial intelligence — a computer, that is actually the one regulating the transmission and custody of these assets; which may, in the end,  get rid of the human intermediaries that you’re expecting in terms of having identity proven by a government agency, or the use of a title insurer or title agent as part of the transfer of these assets. That is one of the major changes that you will have to draft around, and before you can draft it you need to understand the underlying nature of the asset.

It’s not just one type of asset, when we talk about cryptocurrencies that’s actually a misnomer. Of the two-thousand initial coin offerings about, that we’ve seen in the past two years most of those were some sort of intangible property – in the nature of software or an access right. So while, yes, there are hundreds of digital currencies that are trading currently, there are also hundreds, if not thousands, of intangible assets in the nature of access to storage facilities, or access to a Wi-Fi network, or a non-fungible token that might simply be the digital representation of a concert ticket.

The types of assets that we have that are digital assets – we have fiat replacement. To the extent that they are not issued by a central government bank, they are not legal tender; and so therefore, they are not necessarily taxed or treated for purposes of different areas of the law as legal tender.  You also have asset-backed tokens. Asset-backed tokens are the digital representation of, for instance, a gram of gold that was ethically sourced and can be identified on a supply chain. There might also be an interest in a puck of diamonds, and so you’re buying jewels as your asset. Then you have utility or consumptive tokens, those are the ones that are providing you access to distributed storage capabilities or to secure voting for rising democracies.

So Benetta, Wendy just told us about all of the fascinating differences between the central authorities we are used to, and the assets we’re used to, and these new de-centralized currencies and tokens. What do estate planners need to know about drafting documents and generally addressing this new asset class?

Thank you, Suzy. For planners and for drafters at a high level I think it’s very important as advisors to ask clients if they own cryptocurrency. And to make sure that their fiduciaries that they select and their family members, that they also are educated in a way to be able to see if there is any evidence of the family member owning cryptocurrency. There are simple ways of being able to do that. For advisors it’s very helpful to have a client questionnaire. Typically, the client questionnaire asks for a list of all the client assets anyway. So, it is very helpful to include a specific reference to cryptocurrency and how it can be accessed.  Whether it can be accessed through a hard drive, or a thumb drive, or if it’s an online account, it’s just helpful to know how it’s accessed and where that access, that key, might be located. After that, it’s also going back to the education of both the client and the client’s family in just being able to identify or locate cryptocurrencies. So how do you do that? There are a number of ways, and it’s just understanding that – again, the private key to unlock the access to cryptocurrency can be held either online (hot storage) or offline (cold storage).

Cold storage can take a number of forms; it could be a paper wallet (a piece of paper that has the private key written on it), it could be a USB drive, it could be a hard drive on a computer, those are all different ways to identify. Also, if you happen to have the person’s phone and you see that there’s an app that’s based on maybe Coinbase, or some other kind of cryptocurrency exchange, that’s typically a good sign that they have cryptocurrency.

After education and identifying that there is cryptocurrency let’s move to drafting considerations. As a drafter there are a number of things that we can do and we have a lot of provisions in our toolbox. Many corporate fiduciaries, for example, may not feel comfortable acting as a full trustee when cryptocurrency is involved and they may not have the ability to be the custodian, actually hold the assets and have the ability to monitor it on a regular basis. This is where directed trusts are very helpful. You could have the corporate fiduciary doing what the client wants, in terms of doing all of the administration, but then you can carve out the decision-making as it relates to the investment decisions around the cryptocurrency, and have that go to an investment advisor— perhaps, even someone who is also technologically advanced enough to be able to handle working with the cryptocurrency. A directed trust is a great drafting consideration. Another is a simple provision on authority to retain. If the grantor, the client, really wishes to retain the cryptocurrency then it’s good to include an express authorization in the trust document to be able to authorize the trustee, or the investment advisor, to retain the cryptocurrency and it’s helpful to include exoneration language for doing so.

That’s great. Thank you, Benetta, Suzy, and Wendy for educating us on bitcoin and cryptocurrency.

Additional Cryptocurrency podcasts: The Valuation and Reporting of Cryptocurrency on Income, Gift, and Estate Tax Returns and The Ethical Hazards of Digital Assets.