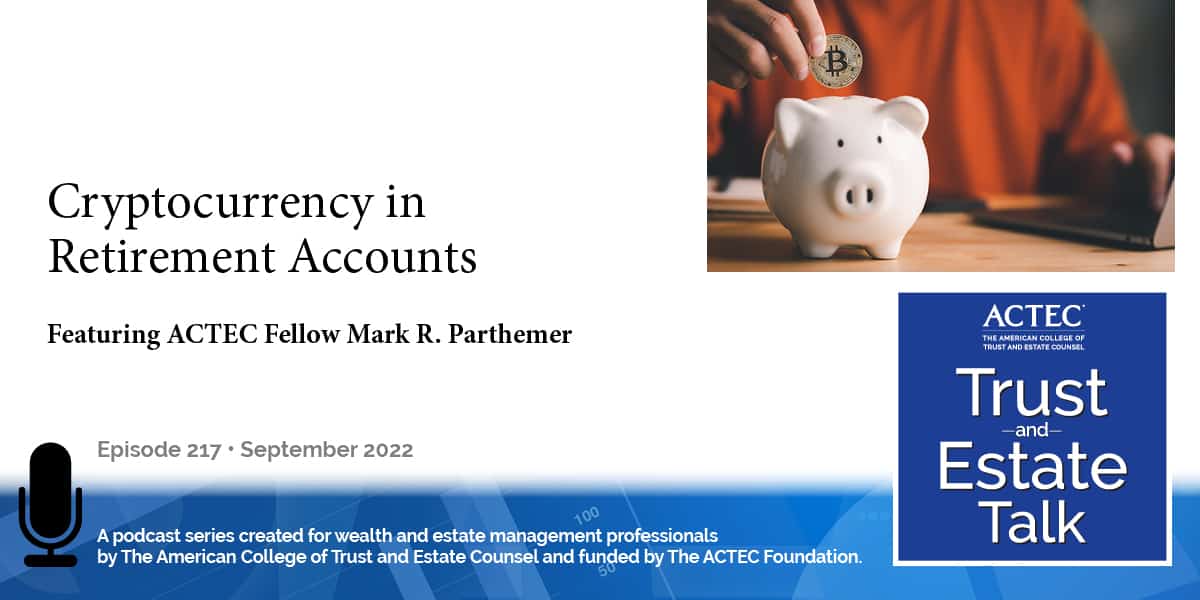 “The Ins and Outs of Cryptocurrency in Retirement Accounts,” that’s the subject of today’s ACTEC Trust and Estate Talk.

This is Natalie Perry, ACTEC Fellow from Chicago. Should investors have cryptocurrency in retirement accounts? What are the risks and benefits? ACTEC Fellow, Mark Parthemer, from Palm Beach, Florida will share his thoughts on this fluid investment option. Welcome, Mark.

Thank you, Natalie, and I’m excited to be talking on this topic. Really what we’re going to focus on are the two major forms of retirement structures- IRAs and 401ks- as they dominate the capturing of retirement assets and look at the question of more “Can you hold cryptocurrencies inside these retirement accounts?” and leave the “should you” question for investment decisions.

Cryptocurrency in an IRA

So, what about IRAs? IRAs currently hold over 34% of all retirement assets – more than $11 trillion. Statistically, households with IRAs have eight times the financial assets as those households without. So, it’s relevant for IRA owners to consider, “Can you hold cryptocurrency inside a retirement account?” Well, first, we need to explore if an IRA can be funded with cryptocurrency. Then, we can look to see whether an investment can be made with it because the general answer is no, you cannot fund an IRA with cryptocurrency with one exception and that’s because under Internal Revenue Code Section 408(a)(1) IRAs can only be funded with cash. Then the question is “is cryptocurrency cash?”

Well, we know Treasury announced in IRS Notice 2014-21 way back in 2014 that cryptocurrency is property. It’s not currency. It’s not cash. So, we’re limited to cash only, but there was that exception I mentioned. What’s the exception? The exception is that except in the case of a rollover because rollovers can be done in kind. So, if there’s an existing IRA that holds cryptocurrency that is rolled into a new IRA, that’s the only time an IRA can be funded with cryptocurrency. But our second question is “Well, what about investing? Can an IRA invest in cryptocurrency?” And the short answer is yes.

It’s not because in 1974 Congress, when adopting the IRA statute, recognized that IRAs can be investing in cryptocurrencies because they didn’t know of it back then. And, in fact, the Internal Revenue Code does not give us a list of permitted assets for IRAs. Instead, the code tells us the four categories of assets that are prohibited in IRAs. Those four categories are S Corporation stock, life insurance contracts, personal use real estate, and collectibles. So, we need to figure out whether cryptocurrency fits within the definition of collectible.

Well, it’s a pretty detailed analysis and, for the purposes of this podcast, let me just say that code Section 408(m)(3)(A) and (B) advise us that cryptocurrencies are not collectibles. As a result, they’re not a prohibited asset and therefore could be invested in an IRA. So, the result is this; we can’t fund an IRA with cryptocurrencies except through a rollover, but an IRA owner could invest.

Cryptocurrency in a 401k

Well, what about 401ks? That’s the second most dominant form of retirement account. Well, 401ks are defined contribution plans. As such, they’re funded by an employer with cash. So, we’re not going to find funding of a 401k with cryptocurrency. Then the question is “Can a 401k  be invested in cryptocurrency?” Well, there’s no list of permitted or even prohibited assets, unlike the IRAs. Instead, what we have is under Internal Revenue Code Section 401(a) that the employer is to identify an investment menu of at least three options- and for these purposes, employers’ securities are ignored- and each of these options must be diversified with materially different risk and return characteristics.

So, could cryptocurrency be one of those investment options? Well, the answer is: it depends. It depends on the other options as to whether it would be diversified. Now, this has become a very hot topic this year because in April a large plan administrator, which hosts 23,000 401ks on its platform with over 20 million participants, announced that they were going to allow employers to utilize a Bitcoin allocation of up to 20%. So, a participant could elect up to 20% of their account in Bitcoin.

Liability of Cryptocurrency in a 401k | ERISA

That brings us to the question of “well, is there any form of employer liability for using a cryptocurrency account inside a 401k menu option?” We focus on this in two areas. First, what if a participant, an employee, invested in a fund inside a 401k plan and the fund goes down in value? Can the employer be held liable for that loss? And the answer is no. Under ERISA Code Section 404(c), if a participant exercises control over the assets in their account, then no one else can be held liable for any loss in value. But let’s now contrast that with ERISA 404(a)(1)(b) which tells us that the employer has a fiduciary duty to prudently select and monitor investment alternatives.

Now we’re not talking about performance, but the identification of at least three investment options must be done with a fiduciary duty. Monitoring those options to ensure they still meet the criteria and are appropriate under a prudent man standard also is something for which an employer could be held accountable. How does this relate to cryptocurrency? Well, we know that the labor department in an interview in the Wall Street Journal earlier this year responded to the potential use of cryptocurrency as an asset allocation inside a 401k by saying they were skeptical and felt that cryptocurrency was speculative and maybe not a good idea.

So, are there any other concerns that we should think about? Well, let me conclude by listing a few of them. Not all cryptocurrencies, since it’s based on blockchain, not all providers have that expertise. There can be indicia of ownership that’s an issue. Fees could be something to be thought about as they may be more than what may be customarily experienced in traditional mutual funds and ETFs. Also, think about the increasing correlation between the S&P 500 and cryptocurrencies. They used to be vastly uncorrelated, but now there seems to be a trend to correlation.

But the one that gives me the greatest pause is the legal uncertainties that are evolving in this area. For example, we know that bankruptcy has been listed as something to be watched out for. In fact, the SEC required a recent exchange in their quarterly filing to identify the risk that customers who custody cryptocurrency on their exchange – if the exchange were to go bankrupt – may be converted into general, unsecured creditors, which could have a major impact on their ability to recover their funds.

So, with that, I think we would conclude by saying this is an evolving area with some legal uncertainties and that, Natalie, is how cryptocurrencies can be used inside retirement accounts. Thank you.

Thank you, Mark, for educating us on this topic. That was great.