Cross-Border Recognition of Powers of Attorney and Guardianships 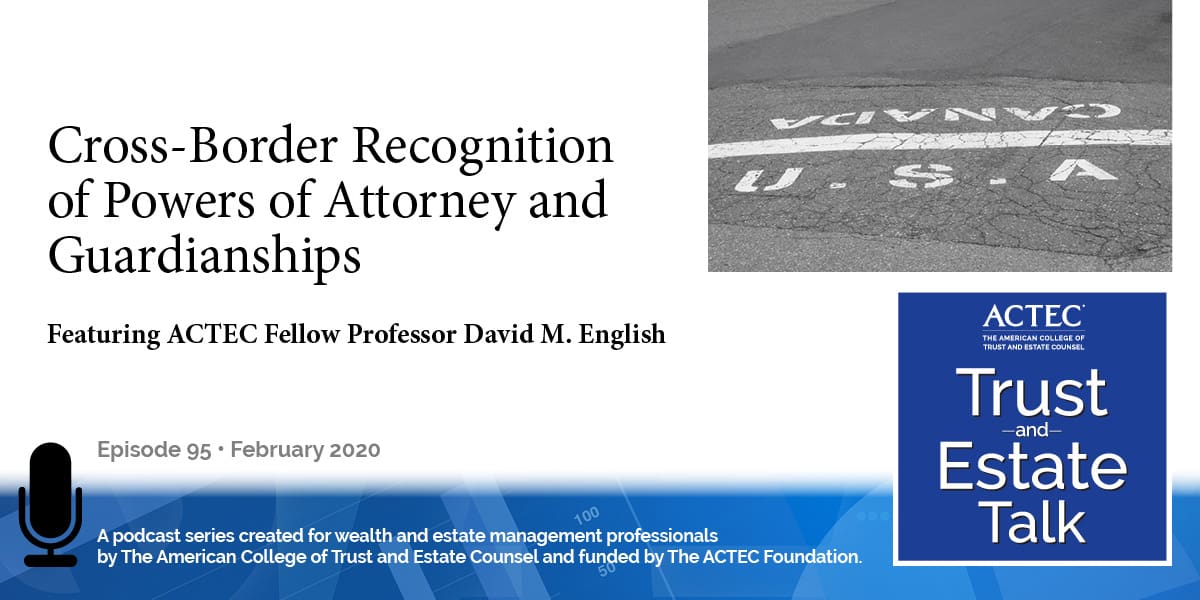 “Cross-Border Recognition of Powers of Attorney and Guardianships,” that’s the subject of today’s ACTEC Trust and Estate Talk.

This is Margaret Van Houten of Des Moines, Iowa. Our clients travel and may live internationally, but are their powers of attorney equally portable and are guardianships recognized overseas? To give us more information on this topic, you will be hearing today from ACTEC Fellow, Professor David English of Columbia, Missouri. Welcome, David.

Thank you. Although, in your introduction you referred to international recognition, many of the principles on cross-border recognition that I will talk about today also deal with recognition of powers of attorney and guardianship between American states. The problem we have with powers of attorney is they’re used widely by our clients. Our clients will travel to different states and different countries, and third-party refusal — that is the refusal of banks and other transactions — can be a very frequent occurrence, and we need to think practically about why that is. Well, one, the form may not look familiar; that is, certain states will use accepted forms and the other state does not. Different terminology may be used, and that’s a big issue on the international stage. So, in Canada it may be called an enduring power of attorney in certain provinces but other term in other provinces, and the terms have not been used in the United States. Certain states have mandatory forms, and then you get to all kinds of other issues like different signing requirements, different language of durability, and so on. And so, this can lead to a problem of acceptance; and so, there are practical ways one can address this. So, there’s discussion of perhaps having more than one power of attorney, for example. But I’m going to deal with the legal principles today that attorneys and estate planners might find useful.

We have a Uniform Act; it’s called the Uniform Recognition of Substitute Decision-Making Documents Act. I know it’s a mouthful. That was approved in 2014. This was a joint project between the U.S. and the Canadian Uniform Law Commissions, and I had the honor to chair that drafting committee. The Canadian counterpart was approved in 2016. Of course, when you have a uniform act approved in either the United States or Canada, it does not become the actual law until a U.S. State or Canadian province enact it. But the Act, nonetheless, even if your jurisdiction has not enacted it, I think provides a very useful approach. Number one, it contains a choice of law provision—what law controls whether the document is valid in the first place. And the general rule is: if you put in your power of attorney itself what law controls, that will decide. And if not, it’s the place or the state jurisdiction where the document was executed. It also includes a choice of law for interpreting the document. Sometimes, certain words, particularly in the healthcare power of attorney area, will mean one thing in one state and perhaps another thing in another state. And then, I think most importantly, the Act protects those relying on the power of attorney, such as hospitals or banks, for the good faith reliance that the document or their assumption that the document is valid. And so, that’s the three-part approach used in the Act.

Enactment of the Uniform Act

Well, how has the Act done in terms of enactments? Well, here it gets a little bit complicated because the Uniform Act follows the basic approach used in the 2006 Uniform Power of Attorney Act, which has now been enacted in 31 states. And that Act deals with property powers of attorney. So in 31 states, at least in the financial area, the law has, in effect, already been enacted. And, if I were to consider this Uniform Act in Missouri, which has not enacted the Uniform Power of Attorney Act yet, I probably wouldn’t enact it as a separate uniform act. I would enact it as a model provision, simply adding an additional amendment to the statute. And so, at some point I need to go out and figure out how many states have taken that approach in incorporating these concepts; but otherwise, in terms of pure enactments, that is, states that have not incorporated the language in their Power of Attorney Act or already have it because they have the Uniform Power of Attorney Act itself:  we have three enactments: Alaska, Connecticut, and Idaho.

Well, what if your state has not enacted the Uniform Power of Attorney Act or this new Uniform Act? Will your state have law on the recognition of powers of attorney? Well, the answer is that a number of states, particularly in their health care statutes, do have rules but they range all over the map; and one of the problems, of course, is when the rules on recognition of powers of attorney from other states or country vary, we then have a lack of uniformity. And, I’m not going to take time to talk about the Restatement of Conflicts of Law because it is very confusing.

Well, one other source of information for recognition of international powers of attorney would be The Hague Convention on International Protection of Adults. That was completed in 2000. It is a useful document to refer to, but it has been ratified to date by only 12 countries and all of those are in Europe; and so, neither of them is the U.S. or Canada, where we would have the most frequent international issues.

Well, that’s powers of attorney. What about guardianships? Well, here it gets a little bit easier because 46 states in the U.S. have enacted a uniform law called the Uniform Adult Guardianship and Protective Proceedings Jurisdiction Act. I know that’s another mouthful. And, we also have The Hague Convention, again not approved in the U.S. or Canada, but at least something that you can look to for ideas. But under the Uniform Guardianship Act, there is a system for deciding which state has priority to appoint a guardian. But what about international guardianships? Because typically, we’re thinking about U.S. state versus U.S. state? Well, that Uniform Act also has a provision on international recognition of guardianship. And what it provides in Section 103 of that Act is it gives the local court—that would be the U.S. Court that’s enacted this Uniform Act — discretion to treat an order from a foreign country the same as if it were an order from another U.S. state.

Now, why would we give the court discretion? Why would we not just automatically recognize Canadian orders of guardianship, for example, because guardianship in Canada and in the U.S., at least in general terms, is very similar? Well, the recognition provision under this Uniform Act would apply to a guardianship order in any country in the world; and we have countries with different legal systems and different political systems and different concepts of guardianship. So, the drafting committee thought it was best that we give the local U.S. Court discretion on whether to recognize the out of country order, but the important point is the court can recognize the international guardianship. One final point I will make is, even though The Hague Convention has not been enacted in or approved by the U.S. or approved by Canada, it does provide a useful source of information. If you’re dealing with a case where you have a power of attorney like document or a guardianship in not a common law country, but a civil law type country. The United States were so used to the concept of domicile. If you go to Europe, they don’t know what you’re talking about. Europe tends to use a concept called Habitual Residence. So, if you have a case from Europe, even though the U.S. has not enacted The Hague Convention, I think you’ll find it a useful source for how to deal with the European guardianship or European power of attorney. And, I appreciate those listening to this presentation. Thank you.

Thank you, David for educating us on cross-border issues with Powers of Attorney and Guardianships.