ACTEC’s Guide for Agents Acting Under Durable Power of Attorney 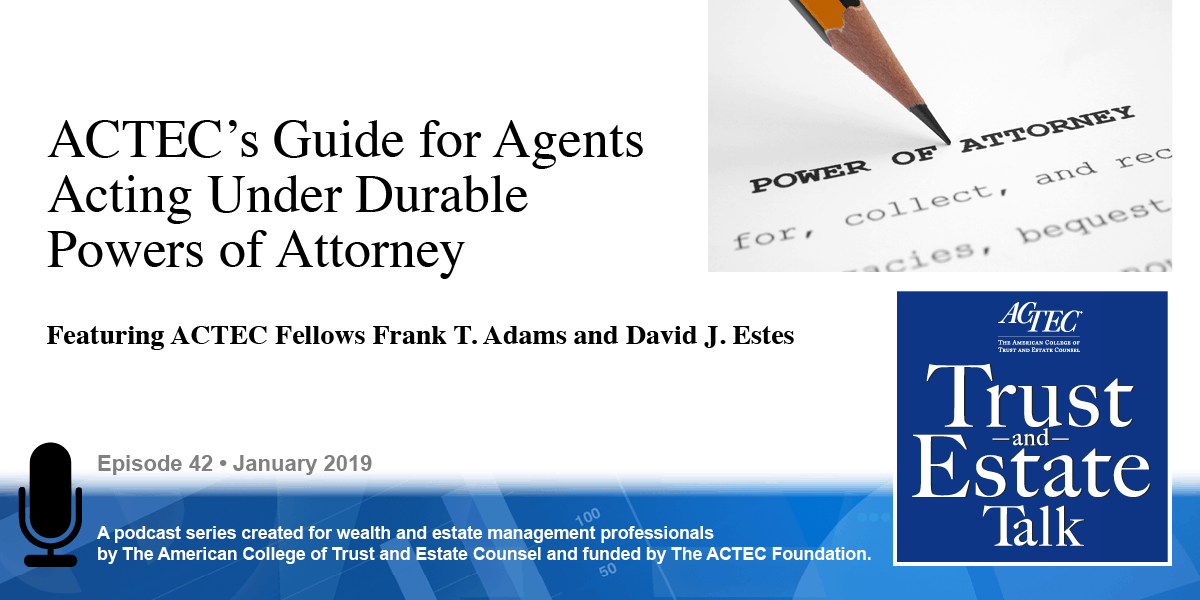 “ACTEC’s Guide for Agents Acting Under a Durable Power of Attorney.” That’s the subject of today’s ACTEC Trust and Estate Talk.

This is Susan Snyder, ACTEC Fellow from Chicago. In the next few months, ACTEC will be finalizing a guide for agents acting under a durable power of attorney. To discuss this topic you will be hearing today from ACTEC Fellows Frank Adams of Coral Gables, Florida and David Estes of Scottsdale, Arizona. Thank you, Frank and David.

Hi, this is Frank Adams. The agent, as David said, is the person designated to act on behalf of another. When you undertake the role as an agent you have certain duties and responsibilities, the primary one- responsibility- is you must act in the best interest of the principal, you’re not acting for the benefit of yourself or for any other individuals. The primary goal is the principal’s well-being.

So, that’s your general duty as the agent. Your powers as to what steps you can take with respect to the principal’s agents will be defined by the document that creates the durable power of attorney and it may also be defined under state law. Every state has a set of statutes that govern durable powers of attorneys. When you act on behalf of the principal the first responsibility you might have is to gather and gain control of the principal’s assets, making sure that you’ve secured them. And you need to secure them not only from third parties but if the principal is incapacitated or incompetent you must secure them and make sure that the principal, he or she, does not frivolously give her assets away or get taken by a con artist and you’re trying to protect the principal from himself or from herself.

And the primary purpose of these powers of attorney as estate planning devices is to- in some ways they’re insurance policies for a client just in case the client becomes incapacitated we’d like to know that the client has chosen who ought to act in his or her capacity without- we hope- the need for any kind of court proceeding for guardianship or conservatorship. So that’s the focus when we draft these powers of attorney. When we have a document like this and an agent needs to act it’s important the agent understands what his or her responsibilities are. That typically means reading the power of attorney, how broadly are the powers defined, what else does state law permit or require for an agent acting under a power of attorney. Once acting the agent is supposed to be acting exclusively for the best interests of the principal, keeping assets secure, making bills get paid, perhaps making healthcare decisions on behalf of the principal, all of which can be done without court proceedings and therefore can be an efficient way to care for the principal but under appropriate guidelines and limitations as imposed by the power of attorney itself or estate law.

One of the first things you’re going to want to do as the agent is to communicate. And that communicates with banks or financial institutions or any other person who might have control or investment responsibility for the assets belonging to the principal. So you’ll want to go to the bank and show them the power of attorney and say, “I’m now acting on behalf…” so that when you write a check or you want to make a deposit in the principal’s account, or you want to pay bills on behalf of the principal your check or your authorization will be accepted.

So when we say an agent’s going to act on behalf of a principal often in the financial setting we’re concerned about the agent identifying the principal’s assets, making sure that they are kept safe and secure, make sure the bills are getting paid, make sure that assets are being invested appropriately. Which sometimes is simple, sometimes is very complicated because it may be that the principal may not be doing a very good job of keeping assets secure or investing appropriately, in which case the agent’s job can become more complicated. But the agent’s job is to identify the assets, find out what needs to be done, then consult with appropriate advisors, whether it’s a lawyer, accountant, investment advisor, to make sure that the principal’s interests are considered first and foremost and that all responsibilities of the principal are now being taken care of by the agent.

So those are things that are addressed, all these various topics are addressed in the guide which is intended not to be a comprehensive guide but a primer to identify issues and concerns that an agent needs to consider when undertaking his or her responsibility as agent.

So thank you David, thanks Frank, on educating us on durable powers of attorney and previewing the ACTEC Guide.