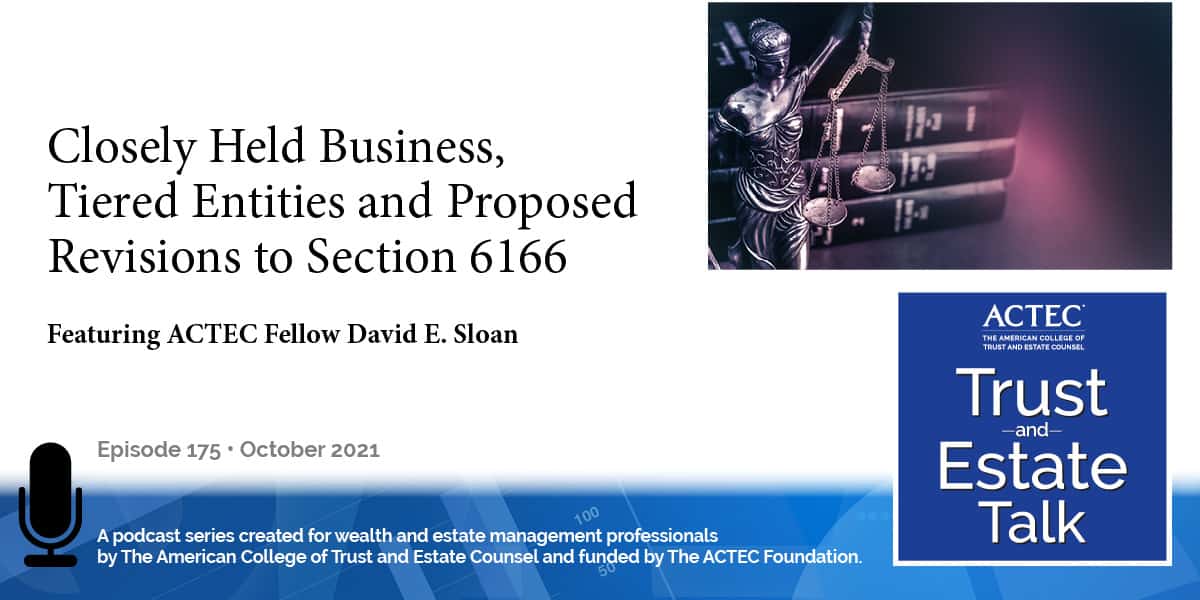 This is Travis Hayes, ACTEC Fellow from Naples, Florida. Today, we will hear about how closely held business interests and tiered entity structures, such as holding companies, are dealt with under existing law, as well as under ACTEC’s proposed revisions to Section 6166. To discuss this topic, you’ll be hearing today from ACTEC Fellow David E. Sloan from Salt Lake City, Utah. Welcome, David.

Travis, thank you very much. I’m happy to be here with you today. Our topic of discussion is, as you said, focuses on tiered entities and Section 6166 and proposed changes from ACTEC. In an ACTEC podcast (Modernizing Section 6166) about two months ago, I discussed Internal Revenue Code Section 6166, which allows an election for deferral of the federal estate tax for estates in which the value of a closely held business interest exceeds 35 percent of the adjusted gross estate. If the deferral election is made, a portion of the estate tax can be deferred for up to five years, subject to interest only payments, followed by payment of the deferred tax, plus interest, in 10 annual installments. The previous podcast discussed an ACTEC proposal for updating and modernizing Section 6166, which was enacted 40 years ago.

The focus of today’s discussion is deferral opportunities available for tiered entity structures under current and proposed 6166, specifically focusing on business companies and holding companies, and the related improvements in deferral treatment that would be made under the proposed law.

To begin with, let’s look at the terms business company and holding company, which are defined in Subsection B8 of the current statute. A holding company is defined very simply as “any corporation holding stock in another corporation.” Meanwhile, business company means “any corporation carrying on a trade or business.” Of course, the key difference between these two terms is that holding company does not require a trade or business. As already noted, the purpose of 6166 is to provide deferral treatment for qualifying interests in a closely held business.

Therefore, the definition of an interest in a closely held business is a critical term. Although 6166 never expressly makes this connection, the definition of business company is also incorporated into the definition of interest in the closely held business. Meaning, that if you have a business company, you are on the road towards eligibility for deferral. Conversely, a holding company without more will not qualify. The whole point of Subsection B8 is to provide an election by which holding companies can be deemed to be business companies. It is important to note that this special election is not the same as a general deferral election made under the statute as a whole. However, making the B8 election comes at a cost.

First, there is no five-year interest-only deferral period. Second, the first installment payment is due on the due date of the estate tax return, without regard to extensions. And third, the special two-percent interest rate on the deferred estate tax does not apply. Furthermore, although the B8 election is generally not available for publicly traded stock, if only the business company’s stock is publicly traded, the election can still be made, but the 10 installment payments will be limited to five. Finally, the B8 election is only available for corporations, meaning that tiered entity structures involving LLCs and partnerships will generally not qualify.

These variations and deferral treatment demonstrate what could be considered to be a flaw in the current law. In the modern world, it is very common to utilize tiered entity structures involving holding companies that are not corporations. For example, an extended family may own a corporation operating a very valuable trade or business. For estate planning and business purposes there may be valid reasons for transferring the stock into several family LLCs, which are in turn owned by other LLCs at subsequent generational levels. Yet the deferral statute intended to protect closely held business interests from being liquidated in order to pay estate taxes provides this family with no protection.

Even if all of the entities involved in the structure are corporations, full deferral under 6166 will not be available. ACTEC’s proposed Section 6166 makes a number of significant improvements in deferral treatment for tiered entities. One major improvement is to take the definition of business company found in current Subsection B8 and move it to the definitions found in Subsection B1, making it generally applicable to the entire code section.

Furthermore, in that new definition, business company is revised to mean “any entity carrying on a trade or business that is treated for purposes of Subtitle A as a corporation or a partnership.” By simply referring to the treatment of the entity under Subtitle A, state law entity classifications become irrelevant. For example, whether a limited liability company is taxed as a partnership or a corporation, if it carries on a trade or business, it is a business company.

This also eliminates certain differences among entity types, such as the 20 percent or more of the total capital interest requirement for partnerships and the 20 percent or more of the value of the voting stock requirement for corporations, both of which are found in current law. In this way, all qualifying entities would be treated the same for all purposes of the law.

Furthermore, the proposed statute also eliminates a special election under Subsection B8 and provides that all deferral is uniform with five years of interest-only payments, followed by ten years of installments. In this way, the statutory bias against holding companies is removed. Although the B8 election is eliminated, proposed 6166 maintains a greatly simplified deemed ownership rule for holding companies in Subsection B3. Proposed B3 also newly defines holding company to mean “any entity that holds an interest in another entity treated as a partnership or a corporation for purposes of Subtitle A.” Once again, the definition of business company is closely tracked with the same distinction that there is no trade or business requirement.

In conclusion, ACTEC’s proposed 6166 makes the following significant improvements to the deferral treatment available for tiered entities. First, all entities, taxes, corporations, and partnerships for federal income tax purposes would be eligible for deferral – not just those that qualify as corporations. Second, holding companies would qualify for the same uniform deferral that is available to business companies. And third, existing law would be simplified by eliminating the special election under Subsection B8 and streamlining the deemed business company provisions of current 6166. These changes would be a major step forward in providing owners of closely held business interests in the modern business world with the protection that Section 6166 was originally intended to provide. Thanks for letting me join you today.

Thank you, David, for discussing how closely-held business interests and tiered-entity structures are treated under existing law and under ACTEC’s proposed changes to Section 6166.