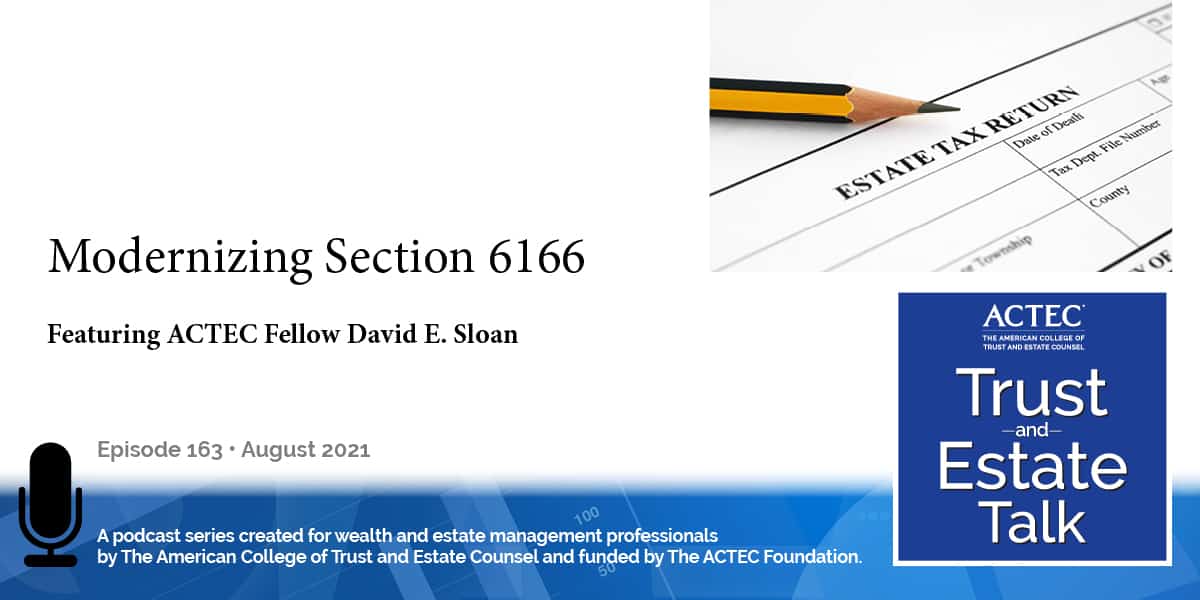 This is Stacy Singer, an ACTEC Fellow from Chicago. ACTEC’s Tax Policy Study Committee has submitted to Congress a proposal regarding revision to Internal Revenue Code Section 6166. To educate us more on this topic, I’m joined today by ACTEC Fellow David Sloan of Salt Lake City, Utah. Welcome, David.

Stacy, thank you very much. I’m happy to be here with you. Our topic of discussion today is modernizing Section 6166. Many of you are familiar with Internal Revenue Code 6166, which has basically existed in its current form for the past 40 years.

In essence, qualification under 6166 requires that the gross estate include a closely held business interest, which exceeds 35 percent of the adjusted gross estate. If this requirement is met, the portion of the estate tax which bears the same ratio to the total estate tax as the value of the closely held business interest bears to the adjusted gross estate can be deferred for up to 14 years. In general, the deferred tax plus interest can be paid in ten installments, with the first installment due five years from the normal due date for the payment of estate taxes, and with interest-only payments made annually for the first five years.

The rationale for allowing deferral of estate taxes under 6166 has always been to prevent a forced sale of a closely held business that might result from imposing and collecting estate taxes when the qualifying business owner dies. However, in the 40 years since the enactment of current 6166, modern business practices, ownership structures, and available legal entities have changed dramatically.

For example, many of the provisions of the statute are specifically directed to corporations and don’t apply to other types of entities commonly used today. In fact, limited liability companies were generally unavailable when current 6166 was enacted.

During the past three and a half years, members of ACTEC’s Tax Policy Study Committee have carefully reviewed 6166 and have prepared a proposed code section that substantially revises and modernizes the current statute. This proposed statute and an accompanying report have been submitted to a number of congressional committees involved in drafting tax legislation.

At this point, I’d like to acknowledge the valuable contribution in these committee members, including Beth Kaufman, Linda Hirschson, Dick Kinyon, Robin Klomparens, Bart Schenone, Diane Thompson, and Steve Gorin.

Although proposed 6166 contains hundreds of changes to the existing statute, I’d like to highlight five major categories of proposed changes. In making these changes, we made an effort to follow the structure and language of the existing statute whenever possible, unless there was a good reason to change it. Our hope was to provide continuity by using familiar concepts and provisions that have been interpreted over the years by practitioners, the IRS, and the courts.

First, we’ve added a number of new definitions, including for business company, entity, ownership interest, and proprietorship. Related to the definitions of proprietorship and entity, the assets of a disregarded entity, including the qualified subchapter S subsidiary, are treated as owned by the sole owner. Rather than focusing on partnerships and corporations as under existing law, a new definition of closely held business is based on the term ‘business company’, which means any entity carrying on a trade or business that is treated for purposes of Subtitle A as a corporation or a partnership, making state law classifications irrelevant. For example, whether a limited liability company is taxed as a partnership or a corporation, if it carries on a trade or business, it is a business company. As a committee, we felt that using business company in this way would be a huge improvement in the statute because all qualifying entities would be treated the same for all purposes of the law.

Second, we proposed new rules for determining what qualifies as a closely held interest. With respect to partnerships and corporations, the current statute requires either that there be no more than 45 owners or that at least 20 percent of the total capital interest for partnerships or the value of voting stock for corporations be included in the decedent’s gross estate. For purposes of the 45-owner test, the proposed statute treats, as a single owner, all persons who would be treated as one shareholder for S corporation purposes under Section 1361.

One advantage of using this net proceeds liquidation approach is that it avoids the complication of valuation discounts. The new approach would also eliminate the voting stock distinction that currently exists between partnerships and corporations.

Third, current 6166 provides several sub-elections for certain situations in which modified or reduced deferral is available, which adds a significant amount of complexity to the statute. In our proposed statute, we would eliminate the sub-elections in Subsections B7, 8, and 10. With the elimination of these special elections, all deferrals would be uniform with interest-only payments for five years followed by combined payments of tax and interest for ten years.

Fourth, the lengthy passive asset test, provided in current Subsection B9, would be replaced by a new and much shorter Sub-Section A3, which would contain a reasonable needs of the business test, incorporating by reference the principles of Section 537. An advantage of this approach is that it makes applicable a well-defined and more substantial body of law that is already in use. Section 537 is actually referenced in the legislative history for 6166, so the fit makes sense.

Fifth, the proposed statute would eliminate the special interest rate for the two percent portion and would modify the regular rate to be a floating rate equal to the underpayment rate times (one minus the highest marginal estate tax rate applicable to the estate). Interest payments on deferred estate tax would continue to be non-deductible.

The ACTEC report also addresses generation skipping transfer taxes. Current Subsection I provides that GST tax imposed on direct skips resulting from the decedent’s death may be treated as if it were an estate tax for purposes of 6166. This provision remains unchanged in the proposed statute. The legislative history for the GST tax declares that with respect to raising revenue from the three transfer taxes, the congressional purpose is to do so “in a manner that has as nearly as possible a uniform effect.”

That history also states this policy is best served when transfer tax consequences do not vary widely, depending on whether property is transferred outright to immediately succeeding generations or is transferred in ways that skip generations.

Notwithstanding this clear statement of Congressional intent, deferral treatment for GST tax imposed upon taxable terminations resulting from death is not possible under current 6166. As a result, ACTEC has also prepared a proposed Section 6166A, which would provide similar deferral treatment for taxable terminations resulting from death. Proposed 6166A closely tracks the language of current 6166, except to the extent necessary to address the GST tax context. In general, all of the changes found in proposed 6166 would also be incorporated into proposed 6166A.

Before concluding, I should mention that the principles of 6166 may find new application in other areas of taxation that go beyond traditional transfer taxes. For example, possible new tax laws, such as deemed realization of capital gains at death, a wealth tax, and a mark-to-market tax might benefit from similar deferral provisions.

In conclusion, ACTEC’s proposed 6166 is a timely effort intended to accomplish several different goals, including the modernization of deferral treatment for both estate taxes and certain generation-skipping transfer taxes; Increased uniformity, regardless of the choice of underlying business entity; simplification, whenever reasonably possible; and overall ease of use. Regardless of how our proposal is used, we hope that Congress will find this effort useful. Thanks for letting me join you today.

Thank you, David, for this update on ACTEC’s proposed revisions to Section 6166.