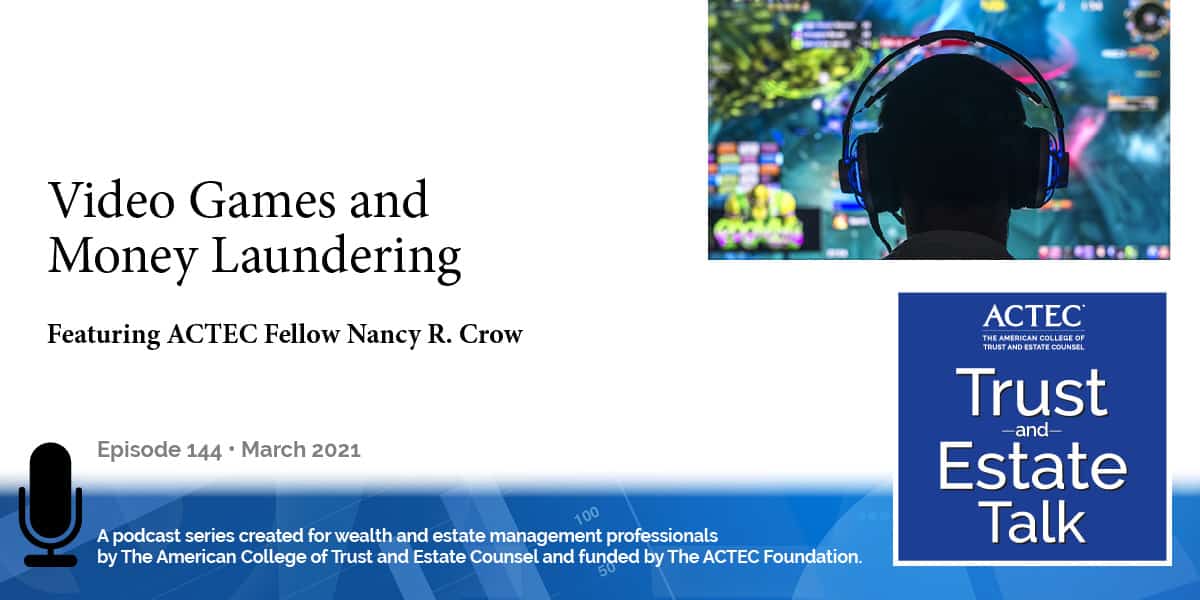 This is Susan Snyder, ACTEC Fellow from Chicago. Video games have become an opportunity for money launderers. To educate us more on this topic, you’ll be hearing today from ACTEC Fellow Nancy Crow of Denver, Colorado. Welcome, Nancy.

Thank you, Susan. Video games are, indeed, everywhere today. They are on dedicated consoles, like Xboxs and PlayStations, on desktop computers in homes, and believe it or not – offices, on peripatetic laptops, on smartphones, even on the evening news. Just this week, Congresswoman AOC and Ilhan Omar appealed to young voters by playing the video game “among us” on the streaming platform, Twitch. Gaming not only offers a great escape to a virtual reality and the opportunity for social contact in a time of quarantine, it’s big business. There are 2.7 billion people expected to play around the globe and to spend nearly $160 billion this year. Yes. This is big business!

Gaming has even become a spectator sport. Before the pandemic sent us all home, eSports stadiums were springing up around the world, broadcast on ESPN and ABC. Video games frequently lured gamers in with no or low entry fees. Then, they offer the opportunity to purchase skins, weapons, other accessories, or power ups to enhance the gaming experience. To purchase these amenities and compete as a well-equipped avatar, gamers use real money to purchase in-game virtual money because gaming is lightly regulated and the dollar amounts of individual transactions are often small – so called, microtransactions. Video games are often the avenue for criminals to cleanse their ill-gotten gains. For example, stolen credit card numbers can be used to purchase game resources, which may then be sold to other gamers on eBay or a myriad of online gray market exchanges, such as PlayerAuctions, G2G, EpicNPC, or IGVault. As with other digital assets, hackers may also take over gaming devices and access players account information for private gain.

For example, in 2019, video game company Valve shut down, entirely, the trading of so-called loot boxes. These have a gambling element because these are boxes full of accessories that you don’t quite know what’s there until you open the box. Sort of a surprise box or grab bag. They slowed down the trading and shut down the trading of keys to purchase these virtual boxes of accessories in their game Counter-Strike: Global Offensive, after it was disclosed that approximately 90 percent of the transactions involved illicit funds. The most popular in-game currencies, such as Fortnite’s V-Bucks, are not directly convertible back into hard money. Like Roach Motels, you can check in, but you can’t check out. Although, active black markets in these gaming accessories apparently exist.

Convertible virtual currencies provide more obvious opportunities to money launderers. Although, they are now more closely but still relatively loosely scrutinized. Participants in the virtual city game – although, they don’t consider it a game – called Second Life, create entire communities whose virtual residents shop in virtual boutiques and live in virtual houses that sell for substantial amounts of Linden Dollars. Linden Dollars are convertible into various kinds of real currency.

In 2013, the United States Financial Crimes Enforcement Network – that’s FinCEN – classified Linden Lab, the home of the Linden Dollar, as a money services business, making it subject to the Bank Secrecy Act to know your customer regulations and foreign transaction reporting. Unlike other video game providers, Linden Lab is now required to file suspicious activity reports or SARS with the IRS, which has recently expanded its review of money laundering.

And finally – remember I said, 2013 Linden Lab was classified as a money services bureau. Finally, in July of 2019, Linden Lab got around to requiring all of its users to register and provide actual identification. But, what to do about this potential cleansing of illicit funds by nefarious folks? What actions are being taken? What should be done to deter the use of video games – the source of joy and escape for many – for money laundering? Understandably, different interest groups have varying approaches to this. For example, last year, the International Financial Action Task Force (FATF) recommended that governments begin regulating virtual transactions and require licenses for Virtual Asset Service Providers. Another acronym – VASP, V-A-S-P; Virtual Asset Service Provider.

Naturally, in contrast, the gaming industry maintains it’s doing a great job of self-regulating. The Association of Certified Anti-Money Laundering Specialists, an international group that fights in financial crime, and coincidentally offers certification of anti-money laundering specialists, has proposed that the industry adopt what they’ve called an enhanced transparency framework. This approach would be similar to the bank’s attempts to know their customers under the currently applicable laws that apply to financial institutions. It would include several steps aggregating personally identifiable information, another lovely acronym that we’ve probably become fairly familiar with – PII, from video game information, such as the user’s time zone, log in time, duration of use, the game played, type of device, the serial number of the device, because they are tracking you out there, and the media access control address, which is unique to your device. They would validate the player’s account with billing information and payment information, sort of like the bank’s asking you for your recent utility statements. It would require additional documentation identity, such as some government issued photo IDs or they might try to draw that information out of the players by enticing to offer additional information, like receiving rewards.

They could obtain and aggregate additional information about player behavior similar to the sensors, that the motorists sometimes are enticed to place in their cars to provide feedback to their insurance companies. And finally, even use score systems like Ubers, for example, to rate players’ in-game achievements to measure their trustworthiness. While implementing this far-reaching transparency framework would clearly be expensive for the industry and lucrative for the anti-money launderers, it would pose perhaps insurmountable burdens on some of the legitimate gamers and they might run afoul of recent data privacy and data protection laws. Whether it would actually succeed in capturing significant criminal activity – remember, so much of this activity is in microtransactions, under $210 in most cases, is unclear. Video game accounts are but one of many digital assets we hold today. As more and more virtual money changes hands, video games are likely to come under increasing scrutiny by government regulators, taxing authorities, and prosecutors. Be prepared.

Thank you, Nancy. Thanks for this eye-opening look at video games and how bad actors are taking advantage of this ever evolving and fast-moving industry.