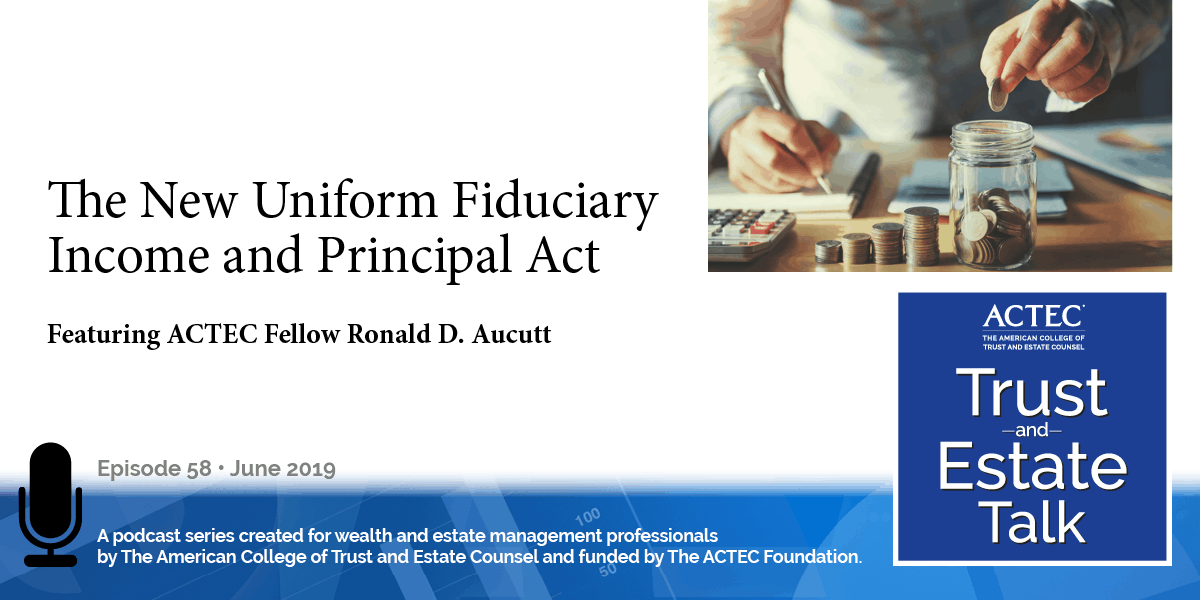 Thank you, Susan. The Uniform Fiduciary Income and Principal Act, approved by the Uniform Law Commission in July of 2018, made many changes that are worth discussing. First, the name. Its acronym UFIPA, usually pronounced UFIPA means Uniform Fiduciary, that’s added in order to emphasize the scope of this act. Income and Principal used to be the Uniform Principal and Income Act. But income has been moved first, in part just to distinguish it, and also because income can be more consequential because it may be more final if, for example, it’s the income that’s distributed.

Under new Section 104 of the 1997 version, the trustee was given the authority to adjust from income to principal or from principal income if three conditions were met.

For example, if a trustee invests prudently for total return, if all income is distributable to a beneficiary, whether or not there’s discretion to invade principal, then that could penalize remainder beneficiaries, when income is very high as in a high-interest rate environment. Or even if income distributions are discretionary, if no principal can be currently distributed, that could penalize income beneficiaries when income is very low. For example, when the total return is mostly unrealized capital gains. In that case, the new power in 1997 allowed the fiduciary to move something from income to principal or from principal to income in order to allocate the total return of the trust, as if those anomalies I just described had not occurred.

UFIPA abandons those three conditions and requires instead only that the fiduciary determined that the exercise of the power to adjust will assist the fiduciary to administer the trust or estate impartially. Not make it possible when it had been impossible, but just assist. For example, even if the fiduciary has discretion over income and principal distributions, UFIPA confirms that there is a power to adjust between income and principal, even though the same result might be achieved just by exercising discretionary distribution authority. This expanded power does at least two things. First, it avoids the anomaly of having trusts that are created with broader discretion over distributions denied the discretion and the flexibility of the power to adjust. But more to the point, it preserves for fiduciaries the dignity of income, which is sometimes easier to explain that there’s been an adjustment between principal and income, and then income has been distributed than to make an invasion of principal, which just sounds a little more dramatic and drastic, even though economically it’s the same. This is mostly optics and appearances, but that can be important when dealing with beneficiaries who come from different places in their understanding of the trust.

Speaking of power to adjust, perhaps the ultimate adjustment is the power to convert to a unitrust. To say that instead of income in the usual sense, distributable income is going to be a given percentage of the value of the trust assets each year or some other period. The 1997 statute did not allow for conversion to that kind of a trust, largely because there was concern about the tax consequences. If, for example, a marital deduction trust is required to pay all income to the surviving spouse, there was concern that changing the distribution to a percentage of the value of the trust would somehow not be acceptable to the IRS and the marital deduction would be jeopardized.

UFIPA does add a power to convert to a unitrust and here’s how that came about. In 2001, the IRS proposed regulations and in 2003, they finalized them. And among other things, those regulations have an example that says, a state statute providing that income is a unitrust amount of no less than 3 percent and no more than 5 percent of the fair market value of the trust assets, whether determined annually or averaged on a multiple-year basis, is a reasonable apportionment of the total return of the trust.

Now, since then about two-thirds of the states have enacted a unitrust statute, generally, of course, following that safe harbor and the regulations, limiting the unitrust rate to 3 to 5 percent, limiting averaging or smoothing to multiple years, not other periods, and so forth. In contrast, new Article 3 of UFIPA does not limit the unitrust rate to 3 to 5 percent, provides the fiduciary very wide flexibility to determine maybe that the percentage is determined according to published indices or to limit how high it can go or how low it can go or how far up or down from year to year, how much values can change from year to year, how and when hard-to-value assets can be appraised, and what assets can be excluded–all of these kinds of things in a so-called unitrust policy that is very, very broad. But Section 309(b) entitled Special Tax Benefits provides that all of that is walked back if there is a special tax benefit that is annual exclusion, marital reduction, eligibility to be an S Corporation shareholder, GST exemption–the kinds of things we would expect to be called special tax benefits. In that case, the power to convert to a unitrust will be limited to 3 to 5 percent after all, will be limited to an annual period, annual smoothing, which will admittedly be most of the large and significant trusts. But a start has been made. The dialogue has begun. This has all been put on the table, perhaps for further adjustments after the IRS gets more comfortable and we see more changes in IRS regulations.

Other changes that are significant involve, for the first time, a governing law provision in a uniform act regarding principal and income. Is the power to allocate between principal income a rule of construction, typically governed by the law of the place where the trust was created, or a rule of administration, typically governed by the law of the situs of the trust from time to time? Well, it affects who gets what in many cases and therefore is probably a rule of construction. That means a fiduciary must look not only to the law of the state where the trust was created, but also probably the law of that state when the trust was created. That’s pretty burdensome. UFIPA specifies that the governing law will be as if it were a rule of administration, the rule of the situs of the trust or the principal place of administration, from time to time. Now, that of course is not always easy to determine and perhaps we will see further developments in additional uniform acts about that, but for the time being we have that assurance from the IRS.

Finally, UFIPA has revised the provisions relating to judicial review of a fiduciary’s decision. Section 202 still provides for some remedies that a court might impose if it finds that a trustee has breached its duty of, its fiduciary duty, or has abused its discretion or something of that sort. But the remedy that used to be in the Uniform Act of ordering the fiduciary to use the fiduciary’s own funds to make a beneficiary whole is deleted, not because this Act, which is a very narrow act, can really tell judges what to do, but because the drafters wanted to encourage judges, to first look at the remedies that would put beneficiaries in the positions they would have occupied if there had not been an abuse of discretion.

For example, just not exercise the power to adjust, or not convert to a unitrust, or order a distribution, or order withholding from future distributions, even ordering a refund by the beneficiary, encouraging the court to do those things first, before going after the fiduciary personally. The idea is that with the broader flexibility and discretion that UFIPA provides, there should be greater guidance for the fiduciary and greater reassurance for the fiduciary in the exercise of those powers. Balance, greater flexibility with greater reassurance. That and the other changes do make this an act that states should want to enact. Thank you, Susan.

Thanks, Ron. Thanks for teaching us a new acronym, UFIPA, and explaining the Uniform Fiduciary Income and Principal Act.