A Primer on Private Foundations 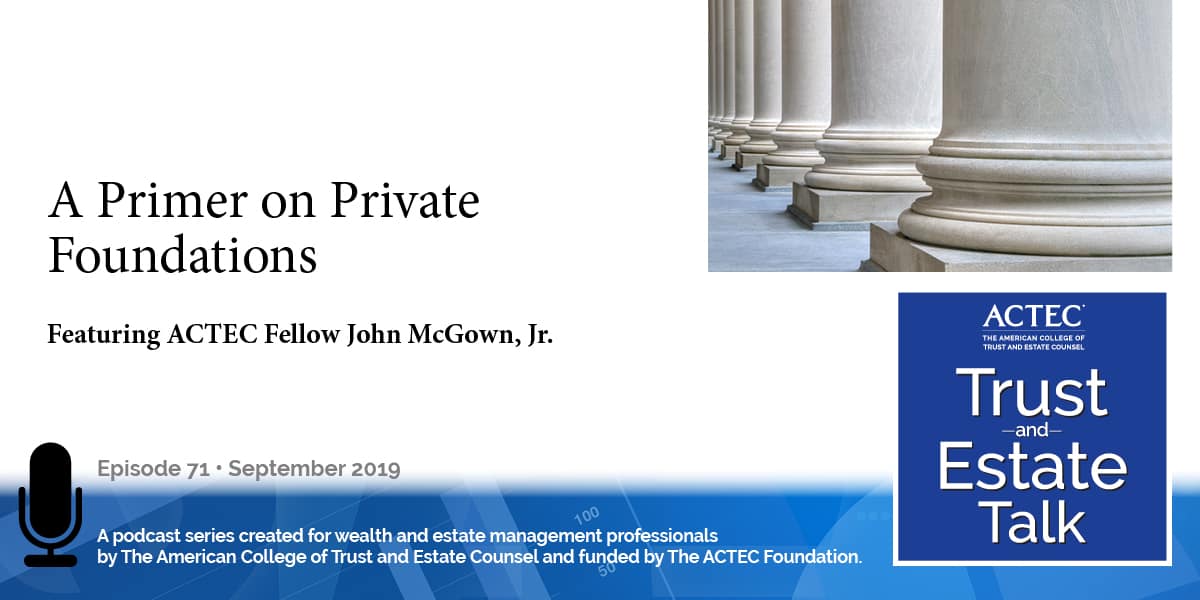 “A Primer on Private Foundations,” that is the subject of today’s ACTEC Trust and Estate Talk.

This is Susan Snyder, ACTEC Fellow from Chicago. To educate us on the rules that govern charitable private foundations, you will be hearing today from ACTEC Fellow John McGown of Boise, Idaho. Welcome, John.

Good day and welcome to a talk about private foundations. As Susan said, my name is John McGown. I do have a varied background. I have been the outside attorney for the Idaho Community Foundation for over 25 years. I taught the first graduate course on tax exempt organizations in Idaho. And, I’ve created and advised private foundations over the years from $50,000 to hundreds of millions of dollars.

So, the definition of a private foundation; I went to Investopedia on the Internet and there’s a one sentence definition: “a private foundation is a nonprofit organization that is usually created by a single primary donation from an individual or a business and whose funds and programs are managed by its own trustees or directors.”

I’ll approach this talk from three different perspectives. One, why would someone want to create a private foundation? Second, we will look at the federal income tax aspects. And third, we will take a look at the State Nonprofit Act and governing documents.

Creation of a Private Foundation

So, let’s turn to why someone would want to create a private foundation.  Creators usually fall within two groups. One, you may have a wealthy individual or family, or second, you can have a corporation. For example, there’s a General Motors Foundation that was created in 1976. The IBM International Foundation created in 1985 that has roughly $300 million. There’s a Micron Technology Foundation created in 2000. It’s got well over $100 million. Corporate foundations typically have close ties to the corporation that don’t apply to most private foundations.

So, my focus will be on the wealthy individual or family. And, why are wealthy individuals or families attracted to creating a private foundation? I see three main reasons. First, tax benefits play a role. There’s an income tax deduction for a current donation to the foundation. And for the very wealthy, the federal estate tax exemption is currently $11.4 million per individual. Many people feel that is plenty for their children and donate the excess to a private foundation. A private foundation can be a vehicle for the family to rally around. I’ll mention a cautionary note here. All too often a family leader will decide to create a family foundation. Unfortunately, the other family members may feel it’s that person’s foundation and they don’t buy into the concept. Further, the children may be resentful because the dollars funding the foundation is money that they don’t inherit. My suggestion for a family leader thinking about creating a private foundation is to bring in the family from the very beginning and defer many of the decisions to them. In short, it needs to be a family project from the start. The third, main reason I think people create a family foundation is control. The individual family creating the private foundation wants to retain significant control over how the funds are invested and how they are distributed.

So, the second item I want to talk about are the federal tax rules. There’s an overriding policy theme here. The default in our country is people pay income tax. The Internal Revenue Code has a special carveout for charities. You can ask to pay a little or no tax by applying for tax-exempt status with the Internal Revenue Service on Form 1023. The federal tax has an important distinction under code Section 501(c)(3), and that distinction is you can have both public charities that qualify under 501(c)(3) and you can have private foundations that qualify. The donors are entitled to claim an income tax or estate tax deduction in both cases for the donation. The public charity pays no income tax; the private foundation will pay 1 percent to 2 percent income tax. There is a special category called unrelated business income that may cause more tax to be paid.

The last item I want to talk about is state law and corporate documents. Private foundations can be created as a trust or as a corporation. Trusts are less common. The corporation statutes will be state specific. One state may have a somewhat different set of corporation statutes than another. But almost every state will have a state Nonprofit Corporation Act. There are a couple of decisions to be made early on. Does a private foundation want to have members? If so, those members are set by the articles or bylaws, but the great majority of private foundations are simply governed by a board and members are not required. The articles of incorporation, I just want to make one point that’s important. The articles of incorporation have to comply with the state Nonprofit Corporation Act, but that is only for state law purposes. There are additional provisions that are required to be tax-exempt for federal income tax purposes. You’re trying to meet two requirements, state law requirements and federal income tax requirements.

In conclusion, private foundations can be a good fit for wealthy or at least somewhat wealthy individuals who want a tax benefit and yet retain significant family control over investments and distributions. There’s a required filing on Form 1023 to obtain 501(c)(3) status, and further, the retention of significant control does have a price to pay by tighter restrictions on operations. You should think of it as a one-way street: the family can give funds to the private foundation, but the private foundation should not be giving funds back to the family.

I wish you the best, as you consider creating a private foundation.

Thank you for giving us more information, John, on the private foundation rules.