Paying and Reducing Estate Tax with a Graegin Loan 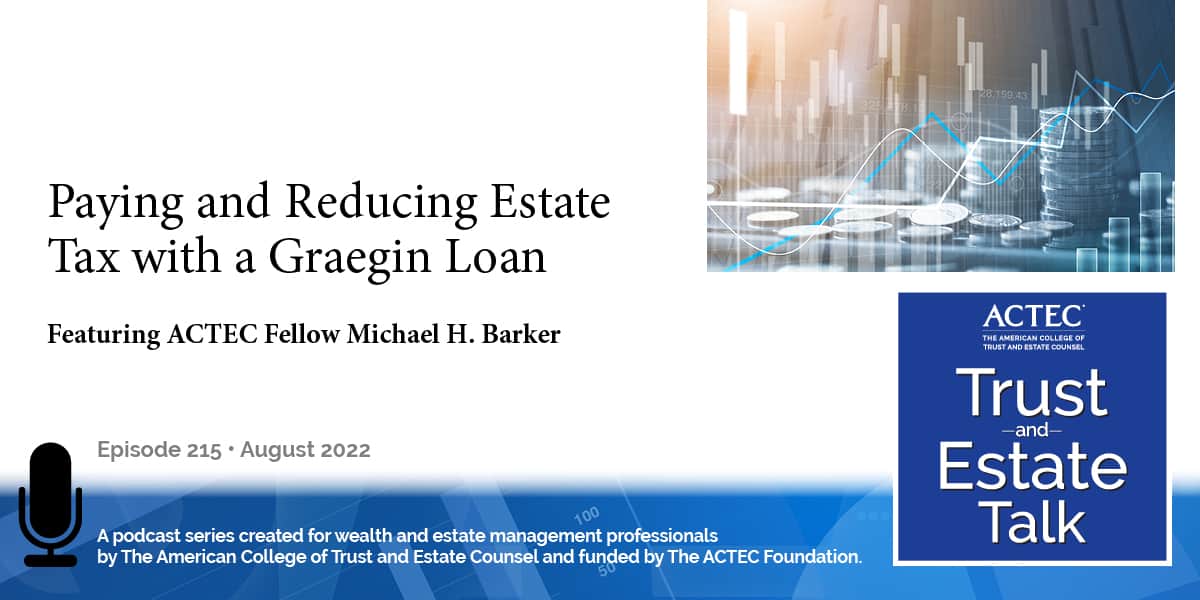 “Paying and Reducing Estate Tax with a Graegin Loan,” that’s the subject of today’s ACTEC Trust and Estate Talk.

This is Stacy Singer, an ACTEC Fellow from Chicago. A Graegin loan is a loan to the estate that, under the right circumstances, can finance the payment of estate tax and administration expenses. ACTEC Fellow Michael Barker from Richmond, Virginia is going to explain the “ins and outs” of a Graegin loan and what professionals need to keep in mind. Welcome, Michael.

What is a Graegin Loan and How Does it Work?

Stacy, thank you so much. You’re exactly right. What we’re going to talk today about is Graegin loans, what they should look like and how to use them, and various strategies and risk assessments that we can use to best advise our clients in these situations. So, let’s start with a quick background, which is  – why would you need a Graegin loan, what is it and how does it work?

So, if you’re administering an estate that has some estate tax that’s going to be due, but the estate is largely comprised of illiquid assets, things like real estate or non-marketable, closely held stock, or other things that would be hard to sell, you only have nine months, of course, to pay the estate tax. So, how do you raise the cash to pay the tax? Well, of course, you could try to sell off some of the assets in a fire sale, or you could borrow the money. And that’s what we’re going to talk about for the next few minutes, borrowing cash to pay the estate tax and structuring that loan in a manner that actually reduces the estate tax due because it would constitute a deduction.

So, let’s level set quickly. What is a Graegin loan? It’s a third-party loan structured with a promissory note that has a fixed interest rate and a prohibition against prepayment. So, the goal again is twofold. As we said, one goal is to obtain cash to pay the estate tax, and secondly to reduce the estate tax by being able to deduct the full interest amount as a cost of administration under Section 2053 (a)(2).

I think Graegin loans tend to be an underappreciated technique, perhaps not as utilized as estate tax deferral under Section 6166 or other similar techniques. But Graegin loans can be a powerful tool, particularly when interest rates are high. I think we haven’t thought about Graegin loans a ton over the last 15 years because interest rates have been so low. But, maybe, we’ll start using Graegin loans a little bit more as interest rates continue to rise. But, like anything with the IRS, there are some complex rules and considerations that we can go through to make sure that we understand the best way to take advantage of this approach.

They used a 15-year note. They used a prime interest rate, which back then was 15%. And importantly, all principal and interest of the loan were to be repaid in a single balloon payment at the end of the term, and the loan agreement contained a prohibition against early repayment. So, the estate requested an approval from the local probate court for the personal representatives to enter into this loan. And then, it deducted the amount of the single interest payment due upon maturity of the note on the federal and state tax return as a cost of administration. And because the interest rate was so high and the term was so long, the interest made a significant dent in the amount of estate tax due.

The IRS disallowed the interest expense as you might expect, saying that the repayment was too uncertain, maybe the parties’ relationship was too close, and they made other arguments. But the Tax Court ruled for the estate, and the amount of interest, the Court said, was capable of calculation from the get-go; it was not vague. And so accordingly, the entire amount of the interest on the note was deductible as the cost of administration under Section 2053. So, the IRS reacted quickly to the Graegin decision and issued a litigation guideline memorandum in 1989.

And the IRS does some Jedi mind tricks in that memo saying that the IRS position has always been consistent with Graegin. I’m not sure how that could be, given that they litigated the Graegin case. But they outlined a series of what the IRS was going to be looking at in the context of these types of loans going forward.

They said, first, the loan has to be bona fide and financed between related entities. It’s going to be subject to stricter scrutiny than arm’s length dealings. If it’s not bona fide, you get no deduction. The transaction has to have substance, unusual financing techniques such as unsecured loans or unreasonably high rates of interest, or loans with longer terms are going to have close scrutiny as well.

Second, the loan has to be reasonably necessary. The deduction won’t be allowed if there’s plenty of cash in the estate and the loan isn’t necessary in order to avoid liquidating hard-to-value assets.

And, third, the treatment by the lender. The lender is going to have to realize interest income so that the treatment is consistent between the lender and the borrower. So, the devil is in the details, like a lot of these things. And, in the 30 years since the Graegin decision, the law has developed to put some more substance around those rules and limitations, so we can put some meat around the bone of what works.

Let’s start with what works. There’s a couple of private letter rulings from the late ‘90s, early 2000’s, that all have sort of similar facts, and all received favorable rulings approving the interest deduction. In those rulings, the loan was made by a commercial bank. We have a bona fide third party with economic substance. There was a seven-year term, so it wasn’t too long; annual payments of both principal and interest, so it wasn’t a balloon. And the note provided the principal and interest wouldn’t be prepaid, so it’s easy to calculate the amount. That’s a very conservative approach; perhaps not ideal because money is leaving the room, right, going away from the family to the commercial bank. But it’s almost like a safe harbor approach because it’s so bona fide and conservative.

So, that’s the good, but what about the bad? There’s a Technical Advice Memorandum from 2005 that disallows an interest deduction. The quick facts of that case are that the decedent formed a limited partnership and contributed as assets to the partnership in exchange for a partnership interest. And what was in the partnership was fairly liquid. It was mostly bonds, cash, and marketable securities. There was also some real estate and maybe some notes receivable from installment sales, but a fairly liquid partnership.

And then, when the decedent died several years later, under the decedent’s will the assets were passed to his children. And one of his children was both the general partner of the partnership as well as the personal representative of his estate. So, before filing the estate tax return the estate borrowed cash from the partnership, they used a 10-year note with prepayment prohibited. The estate’s partnership interests were pledged as security. The interest rate was prime rate plus 1%. All of this sounds pretty good, right, right up the middle. But the IRS disallowed the interest deduction on the estate tax return because the service did not believe that the loan was necessary to the administration of the estate.

Because the partnership held substantial liquid assets and a child was the co-executor as well as the general partner, the child could force the partnership to distribute liquid assets to the estate with which to pay the estate taxes. So, because the same parties stood on both sides of the transaction, partnership assets were readily available for purposes of paying the estate tax, so there wasn’t a need for the loan, according to the IRS, on that matter. They could just pull the cash out of the partnership via distribution. The IRS also made some other arguments and questioned interest rates and other things, but really it was the necessity argument that was most important there.

I like to contrast that case with the Keller case which came out of Texas in 2010 that has very similar facts. But the difference in Keller was that you didn’t have the same party on both sides. You had a third-party lender that was still a partnership formed by two family trusts. So, it was still all in the family but because you didn’t have the same persons as both the lender and the borrower, the Tax Court held that that was sufficient enough to justify the deduction.

One final thought on this is that Graegin loans, as we’re sort of getting a sense of where we can put the meat around the bones and what the contours should be and how to structure them, one thing to keep in mind is that the government looks at Graegin loans from time to time. Specifically, Democratic leadership, and more progressive legislators sometimes, consider the deduction of the interest to be an easy loophole for the wealthy to reduce their tax burdens.

Certainly, during President Obama’s first term, the “Priority Guidance Plan” included some potential limitations, but those didn’t get passed along. But very recently, on June 28th of 2022, the IRS issued some proposed regulations under Section 2053 to curb the loan interest deduction. The proposed regulations would require a present value calculation of the future interest payments to reduce the value, designed to more accurately reflect the true economic cost of the interest payments.

Michael, thank you so much for that great discussion helping us to understand Graegin loans. Really interesting.