An Overview of Tennessee Trust Law 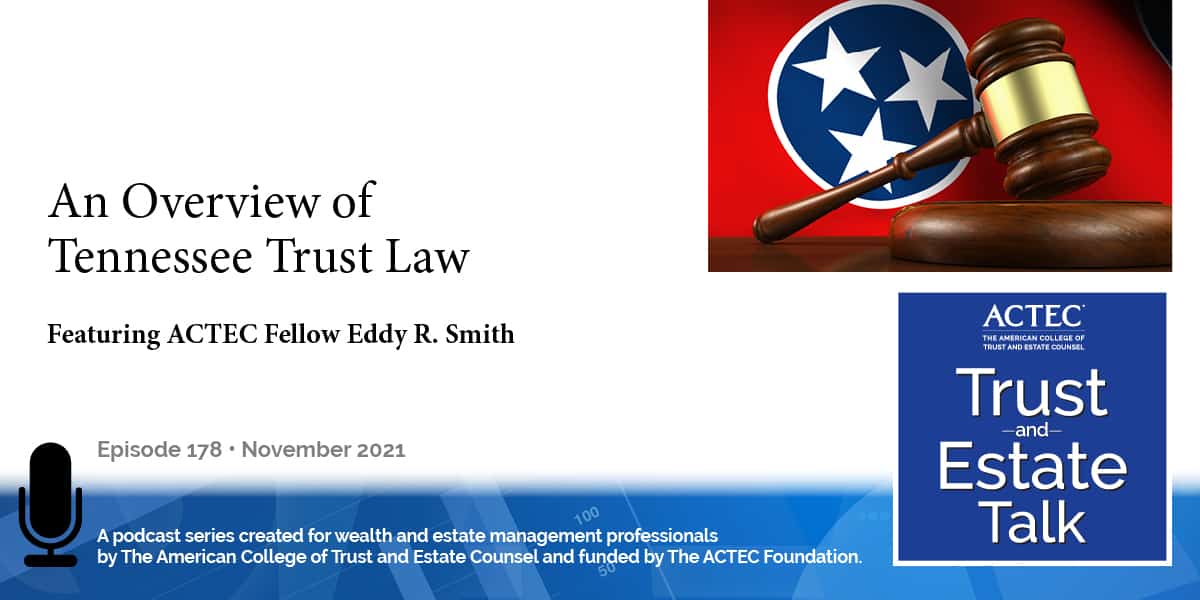 An overview of Tennessee trust law, that’s the subject of today’s ACTEC Trust and Estate Talk.

Thank you, Travis. I appreciate it. As Travis said, there have been a lot of changes in Tennessee trust law over the past 20 years, and they coalesce to create a lot of incentive for Tennesseans and those around the country to consider Tennessee trusts. Primarily, the far-reaching changes make it difficult for beneficiary’s creditors, including ex-spouses, to reach trust interests. Among the features available to all trusts, if a trust has a spendthrift provision, then no creditor or assignee of a beneficiary may force a distribution, even if the beneficiary has the right to enforce a mandatory distribution.

Similarly, regardless of whether a trust contains a spendthrift provision, if an interest is a discretionary interest, then no creditor may force or reach a distribution, or require a fiduciary to exercise discretion to distribute. The statute says the discretionary interest is, quote, “neither a property interest, nor enforceable right. It is a mere expectancy.” Tennessee’s made its modification of irrevocable trust procedures pretty flexible.

They not only protect assets from the creditors of one spouse while both are living, but after one spouse dies, and so long as the survivor remains a beneficiary of the trust and does not have a non-fiduciary power to appoint to self, then that surviving spouse’s creditors cannot get to trust assets. Many states now allow individuals to create self-settled domestic asset protection trusts, or DAPT’s for short.

They purport to offer the same creditor protection available in offshore jurisdictions, but at a reduced cost and hassle. Tennessee joined the DAPT states in 2007 with the creation of Tennessee Investment Services Trusts, or TISTs. A TIST requires at least one Tennessee trustee who is not the settlor and who materially participates in the administration of the trust. There were several statutory changes in 2021, and one is to shorten the period under which a creditor has to go after assets in one of these trusts.

Protection and Provision Changes in 2021

There were several other changes in 2021, also with the express purpose and goal of making Tennessee a desirable trust jurisdiction. We have a new statute that provides an opportunity to register a trust in the state of Tennessee as a mechanism to claim Tennessee jurisdiction and disclaim other states’ jurisdiction.

We added a provision for trustees of silent trusts, trust that limits or forbids the trustee from reporting to the beneficiaries. That created a statute of limitations problem if the trustee didn’t have anybody to account to, now that the trustee of those trusts can account to a representative of the beneficiary or to the settlor, a trust protector, or a trust advisor, and start the statute of limitations. Tennessee reworked its decanting statute, making it clearer that a decanting cannot add beneficiaries, but it can limit or eliminate a beneficiary’s income interest in many cases, and can also accelerate the beneficial interest of a future beneficiary after the settlor’s death.

And there are several other features of Tennessee trust law that make it an attractive jurisdiction to consider for trusts. A 360-year perpetuities period, explicitly allowing special purpose entities as trust protectors. Several years ago, Tennessee repealed its state inheritance tax, and as of January 1st of this year, repealed its state income tax.

Making Use of Tennessee Trusts

So, how do you – Tennesseans and those outside Tennessee – make use of these rules in creating trusts? Well, one way is that clients – will often have trusts when they wouldn’t have had trusts or extend trusts longer so a trust that might have ended for a young beneficiary may instead give the beneficiary the right to become sole trustee and continue. Several of the changes this year reversed the trend that had been true in prior years of increasing settlor control and making it harder for trustees and beneficiaries to modify trusts downstream.

So, clients and their drafting attorneys have to consider whether to push back on any of that. One way to push back is to add or beef up material purpose statements. Another is to override statutory provisions like decanting and modification and maybe even providing within the trust the trusts own decanting or modification procedures. In sum, Tennessee’s working hard to be a jurisdiction with modern and streamlined trust statutes, and those around the country should consider Tennessee when they’re looking for a trust jurisdiction.

Thank you, Eddy, for providing us with a summary of Tennessee trust law.