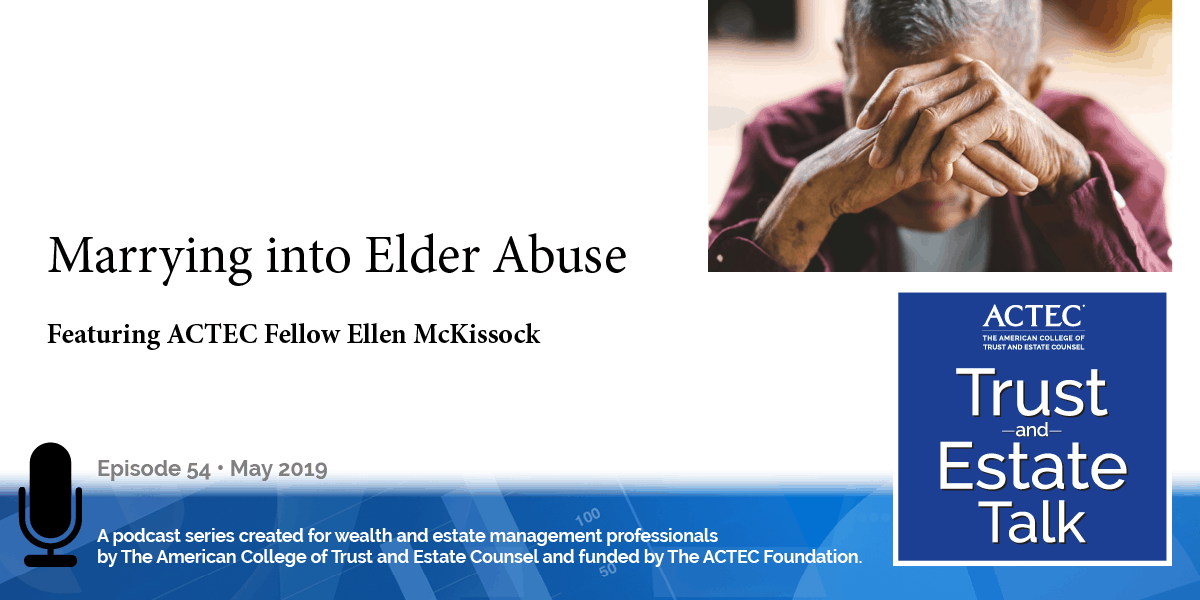 Thank you, Susan. As time has gone on we’re finding that more and more people are marrying elders in order to secure their wealth. This marriage of an elder is on the rise primarily because marriage is very easy to accomplish but very difficult to challenge. We are seeing this because elders are living longer. We’re having more and more elders that are living long and they’re also, the baby boomers are becoming in the +65 bracket. We have issues with regards to marriage in most states they require consent and mental capacity, but the level of mental capacity for marriage differs between state to state.

So, in some states, such as Arizona, I believe they require the mental capacity to contract in order to marry. That’s good because it’s a higher standard for being required to marry.  In states like California though and Pennsylvania, the mental capacity required to marry is very, very low. You only require one lucid moment. In California, in fact, people can marry if they’re under a conservatorship, they don’t need court approval. The court simply looks at the capacity if there had been no conservatorship. In states like Pennsylvania and others, they do have to get a court order. The problem that occurs is regardless of whether or not you have to have mental capacity to contract or mental capacity- just one lucid moment- and know the obligations of marriage, which basically means that you usually procreate and you live together. Regardless, once an elder does this if a family member wants to try to challenge that marriage and say the elder is not married, it’s very, very difficult to challenge the marriage. What we’re seeing is people, such as caregivers, are marrying the elders simple to get their money. And sometimes are taking their money and they are leaving them destitute with either the state to care for them or their family members.

The problem with trying to challenge a marriage is there are only two ways to challenge a marriage: annulment or divorce.  And sometimes you can challenge these marriages prior to death but annulment is the only form of action a third-party can try. Divorce is a very, very personal cause of action and only the elder themselves can bring that cause of action. There are a few states that have exceptions to this rule such as I believe in Arizona they used a substituted judgment and said if the elder had indicated in the past that they would never want to be in an abusive marriage, the court would substitute its discretion and allow someone to bring the divorce, but the typical rule is no third party can bring a divorce. For example, if you have a husband that filed for divorce and then got into a car accident and had to be conserved, that conservator can no longer maintain that divorce. The divorce cannot occur, not by the husband at least. In California there’s an exception that says, if the elder or the person who is conserved can at least convey the idea of a desire to be divorced, then you can continue that divorce, but that’s not a typical rule in most states.

Now another problem is that many family members don’t even know that their elder has gotten married. So, when the elder dies, all the sudden you’re at the funeral and the caregiver or some strange woman says, “Hello, I’m your stepmother,” and the rewards for being married are automatic. If there is no estate plan, then the surviving spouse will receive their intestate share. Even if there is an estate plan most states have what we call an omitted spouse rule, except for Texas, but most states have an omitted spouse rule which means that that estate plan is revoked as to that particular spouse and she or he will receive their intestate share and then the rest will go via the testamentary instrument. So you do have a situation where the person that marries the elderly can simply lie in wait, never tell anybody they have married the elder and when the elder dies they’ll receive an omitted spouse’s share. There are a few states in which you are allowed to challenge the marriage after death but not very many. You can never challenge a marriage with divorce after death, but you can in some states try to annul the marriage, but it’s very, very limited. There’s a void marriage or a voidable marriage. A void marriage never existed in the eyes of the law. That’s incest or bigamy, and the only other item that may cause it to be a void marriage is if they have not followed the statutory requirements to be married they didn’t have a license for example, or they didn’t have it publicly recorded. In those instances, you can try to annul the marriage after death.

In many states, like California, even though you have to have consent as part of a statutorily recognized marriage, after death the only way to challenge consent would have been to claim there was lack of mental capacity. And at least in California and many other states, you are not allowed to attack mental capacity. That’s considered a voidable marriage. A voidable marriage is a marriage where the person who is in the marriage, it may be considered void in the eyes of the law, but, they can cure that and later ratify it, i.e., they marry under the age of consent, but then they become of age and they ratify the marriage. They did not consent to the marriage, but then they later consent to the marriage and ratify it. Or that they were not mentally competent but then they regain their competency and they ratify the marriage. So voidable marriages can never be attacked by a third party. So they cannot attack them after death.

Now we have a couple of great examples of a couple of states that are doing a good job of trying to attack this problem. Texas passed a law, I believe in 2014 in response to the Anna Nicole Smith scenario with Mr. Marshall and in Texas, you can challenge the marriage, you can annul it. You can do it either if there was already a lawsuit in existence whereby you are trying to challenge the marriage and void it for lack of consent because the person did not have mental capacity; you can continue that after death. But even if you don’t have a pending action, you are allowed to bring an action if the elder married within the last three years of their life, and you bring the action within one year of date of death. In that instance, if you prove undue influence, fraud, or duress in securing that marriage, the marriage will be void and then the predatory spouse will not get anything.

Florida also passed a law, the first one in 2010, and that law does not void the marriage, it still allows the marriage to exist but if you can prove fraud, duress or undue influence in that instance the predatory spouse will not receive any benefits of the marriage. They will not receive any benefits under the Florida probate code, they can’t inherit under a trust or a will, they can’t inherit under insurance, and they won’t inherit the intestacy. Those are the  only laws that I know of that have been passed.  In California right now, we have one bill pending, where we are trying to change the omitted spouse rule, it’s very, very limited, it would basically state if a care custodian- which is someone who is paid for caring for an elder- if the care custodian marries the elder during the time they are providing services or within 90-days thereafter, and the elder dies within 6 months of the marriage, then there is a presumption of undue influence that arises and then the predatory spouse has to overcome that by clear and convincing evidence. And we also have another statute, the same bill that we’re trying to amend another statute with regard to our prohibited transferees because care custodians right now are not permitted to inherit under a testamentary instrument unless they meet certain requirements. And what these care custodians are doing is get out from underneath that – they’re simply marry the elder. So, we are trying to amend that statute in order to basically, again, give rise to a presumption of undue influence if they have married the elder during time of service or within 90 days.

I believe New York has some pending legislation also that will enable someone to void a marriage after death and also that particular legislation will then state that the marriage is voided retroactively such that the predatory spouse does not take an elective share.

The problem, as an overview of this entire situation, is very, very difficult to balance the interests of an elder with who has a right to marry whomever they want, to leave their money to whomever they want, and to have love and companionship. But we need to balance that against protecting the elder from people who are marrying them for impure motives and are simply there to take their wealth and perhaps leave them destitute. And this is something that all of our legislatures are currently struggling with.

I have to say that we have a statute in Illinois that doesn’t address the what if the caregiver just marries to solve the problem of the presumption that they’re taking the money. So, I’ve learned something, and I will look forward to maybe suggesting that change for Illinois.

Thanks, Ellen. I appreciate your speaking with us about these challenges in the marrying into elder abuse situation.