What should attorneys have in their Engagement Letters? 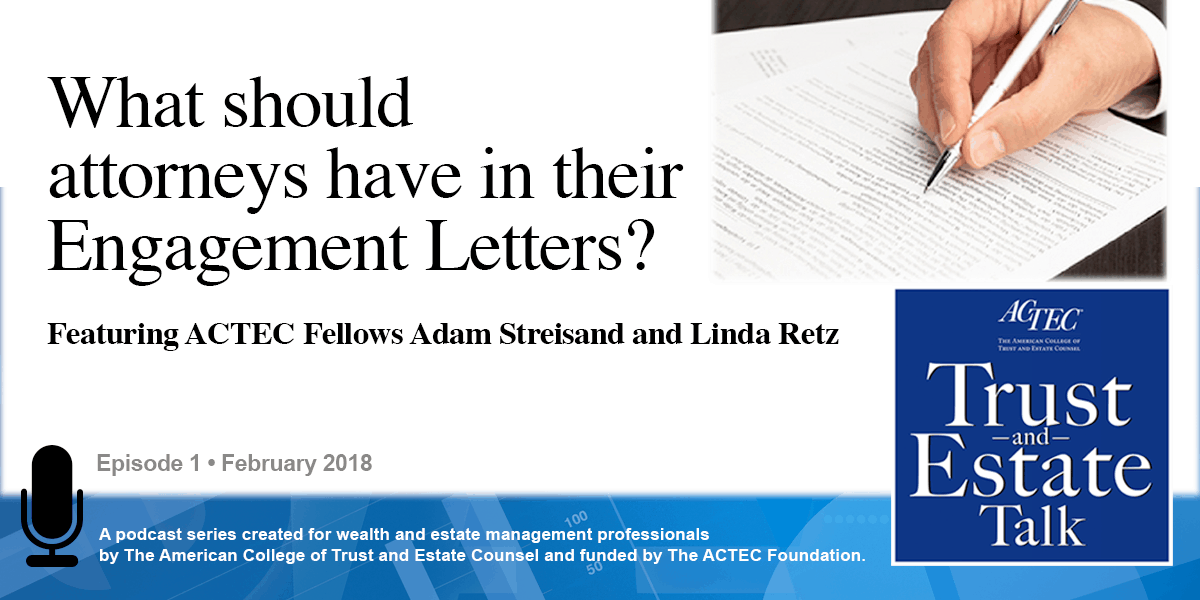 “What Should Attorneys have in their Engagement Agreements” that’s the subject on this ACTEC Trust and Estate Podcast.

This is Susan Snyder, ACTEC Fellow from Chicago. ACTEC has just published its 3rd Edition of the Engagement Letters Guide for Practitioners. To give you a guide as to what should be in your engagement agreements we will hear today from ACTEC Fellows Adam Streisand of Los Angeles and Linda Retz of Torrance, California. Welcome Adam and Linda.

Thank you, we’re happy to be here. Well first of all let me say that engagement letters are an invaluable tool for setting the stage for the representation and managing a client’s expectations. And the first task at hand in drafting an engagement letter, of course, is to identify the client or clients and define the scope of the engagement and in what capacity the clients will be represented. Adam, can you tell us a little about that?

Yeah, you know, Linda, what’s really interesting is that many lawyers when they draft engagement agreements simply identify the client, “I’m representing you, Judy Jones,” maybe they reference it’s in the capacity of the estate of “George Jones” and don’t think about how important it is to be more specific about exactly in what capacity you’re representing the client and what the scope is. And I’m going to give you a little bit of a story about a recent case that will make it clear as to how important it is to identify the capacity in which you are representing a client. Just as one example as to why it’s important to be specific in engagement agreements.

So the case is called Urick v. Urick (U-R-I-C-K), recent case from the Court of Appeals of California. Aileen Urick established a trust in 2013 and she nominated her daughter, Dana, to be the trustee and it’s a Charitable Remainder Annuity Trust–a CRAT. The CRAT would provide income would go equally to Aileen’s children, Willis and Dana, and Dana’s child. The remainder would go to the Phillips Andover Academy in honor of Aileen’s late husband.

In January ’14, Aileen did a handwritten note in which she said she wanted her son, Willis, to be disinherited. In January ’14, her estate planning lawyer sent her an amendment to effectuate that formally, and she didn’t sign it. In February ’14, the estate planning lawyer sent another amendment to effectuate that change, and Aileen didn’t sign it. But in August 2014 Aileen sat down with her estate planning attorney and completely restated her trust. But, once again, she actually provided for with the same disposition, so the income would go to Willis, to Dana, and to Dana’s child equally, and she included a no contest clause and said, “If any beneficiary,” and that’s important, “If any beneficiary challenges or seeks to invalidate any of the provisions of this trust, they’re disinherited.”

So the court had to determine in which capacity was she bringing this to decide whether she violated the no contest clause and ought to be disinherited. The court noted that in the caption all it said was, “Dana is petitioning the court.” Under the attorney’s signature, it said “Attorneys for Dana” without specifying whether she was a beneficiary or trustee. She brought it under a California Civil Code Section 33-99 which she could only bring it in her capacity as a beneficiary and she said, “But wait, wait, court, I could have brought this under Probate Code Section 17-200 which is a petition that a trustee could bring.” And the court said, “Well, that’s true but the fact that you brought it under 33-99 is evidence that you were bringing it as a beneficiary. And it’s consistent, this petition, with your interest as a beneficiary, not necessarily as a trustee where you have duties to all of the beneficiaries, including Willis.”

So the court said, “You weren’t specific about which capacity you were bringing this, your attorneys weren’t specific about in which capacity they were representing you, but we think you brought it as a beneficiary and therefore you have violated the no contest clause and you had no probable cause either because, so what, she did a handwritten note. She refused or didn’t sign the amendments that would have effectuated the change and she restated her trust and did it exactly the way she had done it in the past.”

So, can you imagine, Linda, the malpractice situation that the lawyer has- the lawyer was representing Dana in a situation where Dana would have been a 1/3 beneficiary of this trust, took this aggressive position by filing this petition in which she sought to make herself and her child the only beneficiaries and she ended up getting disinherited. All because the lawyer could have simply said, “I’m representing you, Dana, in your capacity as a trustee and not as a beneficiary.”

So that just highlights how important it is at the very outset in your engagement agreement and then, of course subsequently, to make sure you have identified specifically in which capacity you’re representing a client. That just gives you one little horror story about why the importance of engagement agreements and why it’s important and useful to go to the ACTEC website, look at some of the forms that we have, and which checklists on the kinds of issues you should consider, including this one, in creating your engagement letter.

Thank you, Adam, that’s very informative. Now, we know that often times in estate planning context and in litigation matters,we’re asked to represent more than one client and certainly there are potential conflicts of interest that arise in those situations. And there can be two kinds of conflicts of interest, one where, let’s say you and I are married we’re going to see a lawyer to have our estate plan done, and, another one where perhaps we’re going to see an attorney in a firm and we may be parties to litigation and we’re not aware that perhaps the firm represents other clients in unrelated matters. Can you tell us a little bit about that and what disclosures should be made in the engagement agreement?

Sure. So, the key is informed written consent, right? So the effectiveness of any conflict waiver- and of course you can waive, you can have clients waive conflicts- is informed written consent. Was the client provided specific or sufficient facts from which the client could make a knowing waiver of the consequences of waiving that conflict with the respect to the lawyer?

There’s a whole different circumstance that you alluded to, which is, can you get a client to waive in advance a potential conflict of interest that might occur in the future with a different client? And the courts that have dealt with that have said, “Look, you can’t just get a client to say, ‘Well, I may represent- your lawyer may represent a client in the future and that client may have some conflict with you and we can represent that client, even represent that client and sue you.’” That kind of sort of generic waiver is not going to really provide informed written consent.

Generally, when these waivers work is when you can identify the specific client with whom there might be a conflict in the future and the nature of possible conflict. For example, there was a case in which Heller Ehrman had a long-standing relationship representing Visa, and it took on the representation of another firm called First Data, which developed a system for credit card transactions. And Heller Ehrman said, “Look, we represent Visa and there could be circumstances in the future- we don’t know of any at the moment- but there could be circumstances where your credit card processing system could have some impact on Visa, and we’re going to represent Visa in the future, even if it’s Visa suing you, First Data.” And First Data agreed to that waiver and subsequently after the representation of First Data Heller Ehrman represented Visa against First Data and the court said, “Hey, First Data, you waived it.” And that was effective.

So it’s important to identify the specific party?

As much as you can. And the other day, you pointed out something important which I think we should talk about just for a second, remember that there are rules of professional conduct about how much you can disclose about a particular client, even in trying to resolve conflicts. And that’s a delicate balance about 1) you have to be specific in order to get informed written consent and 2) you have to make sure not to disclose another client’s confidences that that client doesn’t want you to disclose.

So if we are concerned about getting informed written consent we might ere on the side of disclosing as much as possible, but then we run up against the rules with respect to client confidences.

We’ve got to be careful.

Well thank you Linda and Adam for helping us with our Engagement Letters.