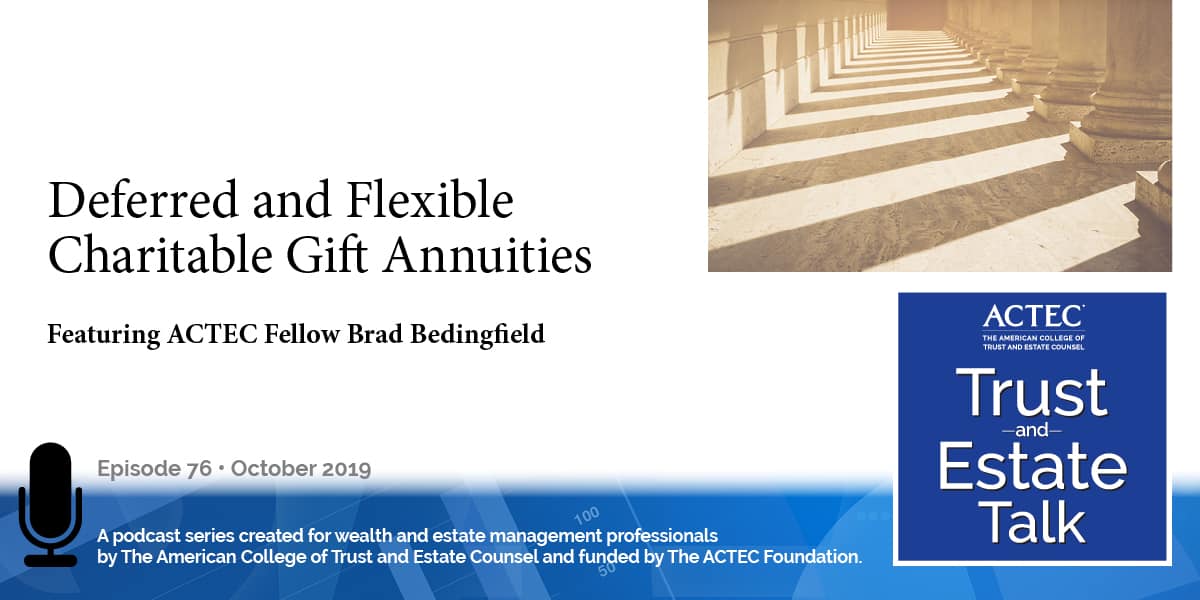 This is Ed Beckwith, ACTEC Fellow from Washington DC. Today we will hear about advanced planning opportunities for making gifts to charity in exchange for life income interests. To tell us more about this topic, we will hear from ACTEC Fellow Brad Bedingfield of Boston, Massachusetts. Welcome Brad.

Each annuity payment in a CGA is taxed in part as a tax-free return of capital, reflecting return of the initial contributed amount, and in part as ordinary income, reflecting deemed earnings. If long term capital gain property is contributed as opposed to cash, gain attributable to the sale portion of what the donor contributes is generally realized immediately like with any sale but can be realized ratability over the life of the annuity if the donor is the sole annuitant or the initial annuitant in the two-life annuity and the annuity is not assignable except to charity. So, with that baseline, let’s talk about Deferred and Flexible Charitable Gift Annuities.

Most Charitable Gift Annuities are set up to begin payments soon after the initial transfer is  made within a few months at most. However, it’s possible to set the payments to begin years later. This can be useful if you think you will need payments later but not in the near future, which can be a helpful supplement to retirement planning. Deferring payments in the earlier years increases the charitable deduction that you get if all else is equal because you are foregoing the first so many years of payments, resulting in more benefit to the charity.

A deferred CGA is taxed much like a regular CGA. If it’s funded with long-term capital gain property, the gain attributable to the sale portion can still be realized ratability over the life of the annuity to the same extent as with a regular CGA with capital gain realization beginning only when the annuity payments begin, which can present some tremendous capital gain deferral opportunities. One thing to be aware of, unlike with regular CGAs, when purchasing a deferred CGA it’s impossible to know precisely what the payouts will be because the IRS tables that you have to use in determining that are the tables that are in effect when the payment begins, and this is the trade off in deciding to take advantage of the deferral possibilities of a deferred CGA. The ability to defer these payments provide some nice flexibility, but CGAs can be even more flexible than that. Rather than setting a deferred start date when you establish the annuity, how about waiting to decide when the payments will start as you go? This is a Flexible Deferred Gift Annuity. The present value of the annuity right has to be determinable when the CGA is purchased; you need to know that value to know how much charitable deduction you are going to get. However, there are a range of possible scenarios that provide an equivalent value. You could elect to start the annuity payments later and get a larger payout or elect to start them sooner and get a smaller payout. Those two scenarios can be set up so that they are equivalent in terms of present value. As long as those two options are actuarially the same, it shouldn’t affect the initial charitable deduction, and therefore there should be no need to choose one of them upfront. In fact, you can have more than two options; you can have a whole range of them. As a practical matter, when you are purchasing a flexible Charitable Gift Annuity, the donor will have to agree to a minimum possible commencement age and a maximum annuity payment, but within those parameters you can choose a range of possibilities for your potential elections — when it’s going to start and how much you will get paid–as long as each of those options is equivalent in terms of the present value at the time you purchase the annuity. This flexibility has been approved by the IRS in private letter rulings, not in official guidance, but they are very commonly used in the charitable world today.

There are other ways in which a Charitable Gift Annuity can be flexible. The IRS has recognized again in private letter rulings that payments can escalate every year with annuities. In theory, in fact, there’s nothing in the law restricting escalating or decreasing payments, rather than fixed payments as long as the present value with a stream of payments is determinable when you purchase the annuity and the payment stream is not connected to the income of the contributed property. In practice, you may have trouble finding exotic CGA offerings like that on the market because charities tend to stay within the ACGA rates and calculations, which don’t tend to encompass those kinds of things, but it’s worth knowing that theoretically that flexibility is there. There’s also flexibility with respect to subsequent transactions. Once a gift annuity is established, the annuitant can sell or exchange the annuity generally to the same extent and subject to the same tax consequences as with any other annuity.

An example of that that’s been marketed in the charitable world is the so-called College Gift Annuity. A parent purchases a deferred gift annuity for a child to begin when the child reaches college age and as required under the rules continue through that child’s life. The parents would prefer to have it paid in four payments for each year of college and then be done with it, but per the IRS rules related to the unrelated business income tax, the annuity has to run for the life of the annuitant, so you can’t set it up that way from the outset.  However, the IRS has recognized in private letter rulings that the annuitant may have the option to sell or assign the annuity back to the charity in return for either a lump sum payment or an installment payment without causing problems for the charity from a tax perspective. There may be tax consequences to the donor, but at the end of the day you can set up a Charitable Gift Annuity and have the effective equivalent of four payments covering four tuition payments. The bottom line is because of the relatively light tax code restrictions on Charitable Gift Annuities as opposed to Charitable Remainder Trusts, donors have a tremendous amount of flexibility in how they might structure annuities and annuitants have considerable flexibility to make changes to their annuities down the road. Although it lacks the potential appreciation upside of a Charitable Remainder Unitrust, the simplicity and flexibility of CGAs makes them incredibly popular as a means of benefiting charity while providing for a predictable stream of income.

Brad, thank you for educating us on this important topic. 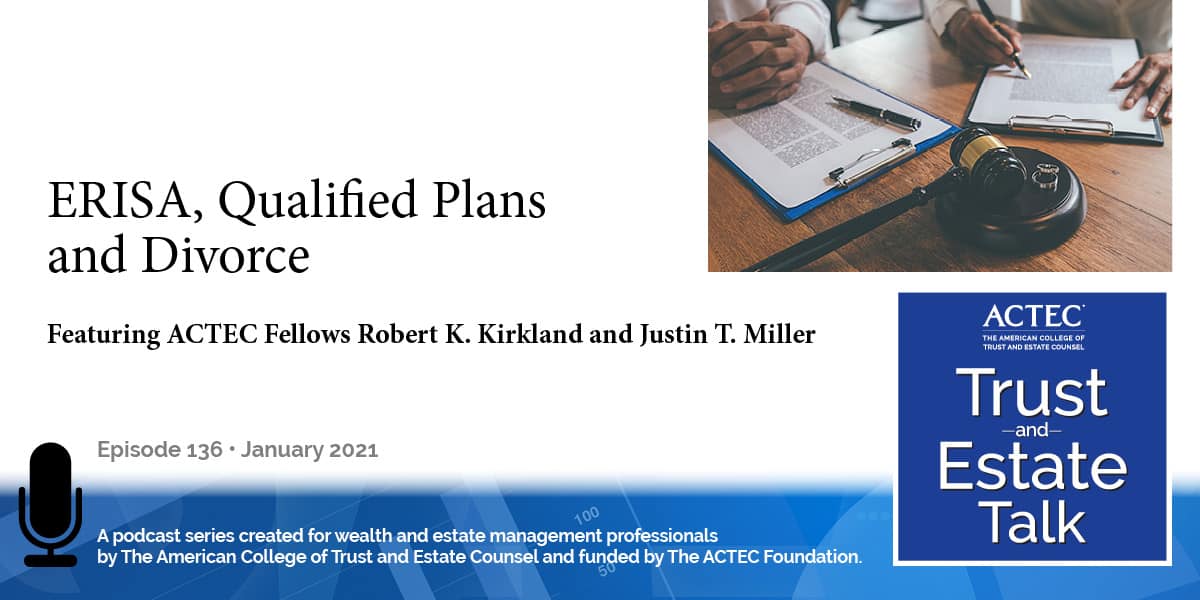 An explanation of beneficiary designations and income tax consequences related to ERISA and qualified plans during divorce.

END_OF_DOCUMENT_TOKEN_TO_BE_REPLACED 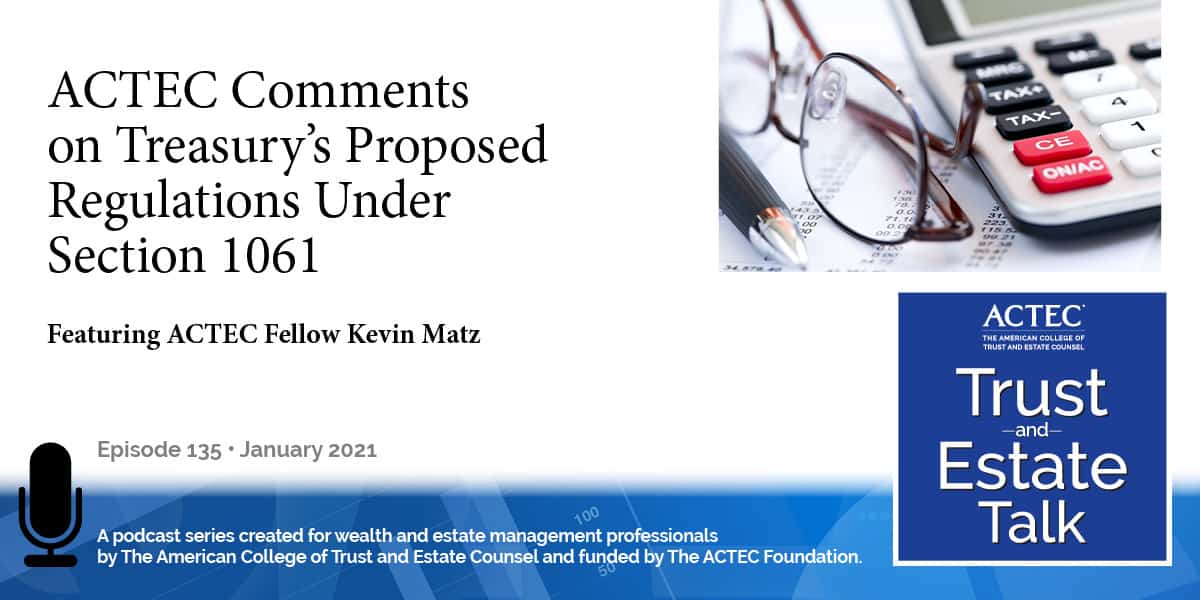 An overview of comments ACTEC submitted to Treasury on 10/5/20 issues regarding proposed regulations under IRS Code Section 1061.

END_OF_DOCUMENT_TOKEN_TO_BE_REPLACED 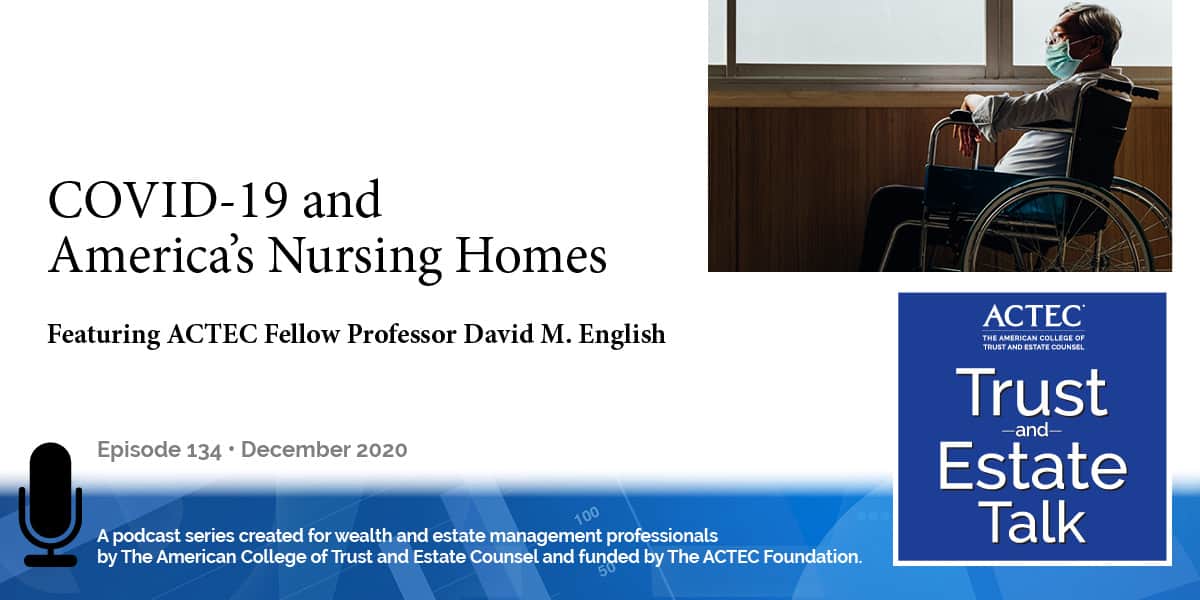