The Corporate Transparency Act: The Clock Has Started 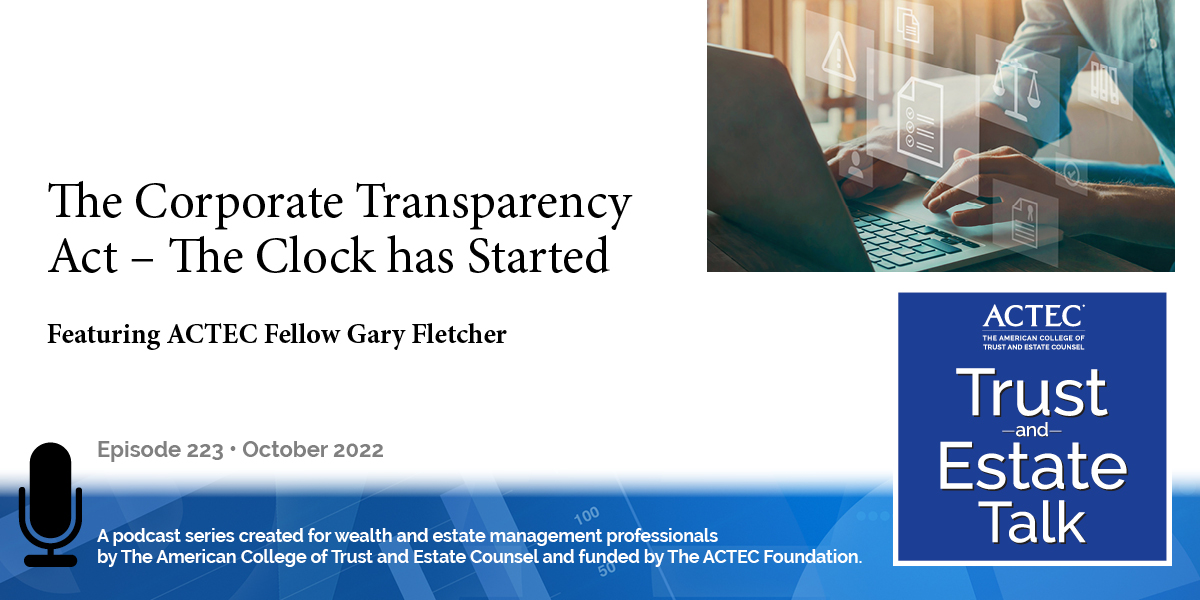 “The Corporate Transparency Act: The Clock has Started,” that’s the subject of today’s ACTEC Trust and Estate Talk.

It was passed on January 1, 2021. Many don’t know about it, and part of the reason for that is that it was enacted under the National Defense Authorization Act of 2021. So, it was kind of buried within a Defense provision. The reason for that is that the target of this Act is money laundering and funding of terrorism. So, because it was presented in that manner many of us planners are not necessarily familiar with it, as it’s not, at least up until now, coming across the radar on our updates. The Corporate Transparency Act basically is a new reporting requirement that is going to impact roughly 26 million existing entities, forms from basically the beginning of your practice to date.

When it was passed on January 1 of 2021, it indicated or required that regulations be issued within one year from the date of its passage so that it can be implemented. That did not occur. In December of 2021, we got proposed regulations, which generally addressed the concept of a beneficial owner, which I’ll be explaining, and has a fair amount of ambiguity. So, we’ve been waiting for a final regulation. The final rule- as it’s called- coming out of the Financial Crime Enforcement Network, or FinCEN, was announced for relief on Thursday, September 29th, and was published in the Federal Register one week ago on September 30th, 2022.

What is a reporting company? And this is where the title “Corporate Transparency Act” becomes a little misleading. A reporting company is a corporation, a limited liability company, or any similar entity that is formed by the filing of a document with the Secretary of State or a similar state agency or an Indian tribe. So, basically all of your corporations that you have sitting out there, all the LLCs that you have sitting out there, they are all reporting companies. And generally, these filing requirements or reporting requirements are going to be applicable to them. There are exemptions that were listed in the Act itself.

Once you have a reporting company, what is required to be reported? There’s the basic information required to be reported about the entity itself; so, basically its name, its identifying number, its address, et cetera, but then more importantly it’s required to report information on its beneficial owners. That’s where the meat of this issue lies. What is the beneficial owner? Basically, that is one of a couple of things. If you own at least 25% of the reporting company, and there are underlying issues with regard to ownership that we have to dive into when we get into the weeds on that; but basically, if you own 25% or more, you’re a beneficial owner.

But that’s not the end of the test. Even if you don’t own 25% or more, if you can exercise substantial control, whether direct or indirect, over the company or key decisions of the company, or selection of officers of the company, you too may be a beneficial owner. This is where this crawled into our planning world greatly. A trust on estates is not a reporting company because, at least in almost all cases to form a trust, you are not filing a document with the Secretary of State or a similar state agency. So, a trust is not a reporting company.

A trust, however, in many cases, is going to be deemed a beneficial owner because, as we know, many of these entity interests in our plans are held by trusts, which then gets down to a sub-issue of “Okay, once I have a trust with a beneficial owner, what information am I required to report?” So, in almost all cases, that’s going to be information with regard to the trustee, and then in more limited circumstances, it’s even going to be information with regard to beneficiaries of the trust. Side note: this does not only apply to domestic companies, it also applies to foreign companies who have registered to do business in the U.S.

The third category is a company applicant, which basically means the individual who was involved or responsible for the filing of the document that formed the reporting company entity. This is one area where we got a little bit of relief under the final regulations compared to what the proposed regulations said. Under the proposed regulations, we were going to have to report on company applicants for all pre-existing entities. So, all of those 26 million pre-existing entities, we were going to have to report that information. Under the final regulation, they’ve given us relief in that regard. So, the reporting with regard to a company applicant will only be applicable for entities formed after January 1 of 2024.

What are the deadlines for filing? With regard to pre-existing entities, entities in existence as of January 1, 2024, the effective date, they will be required to report within one year of that date. Newly formed entities after January 1 of 2024 will be required to report within 30 days of formation. And then, thereafter if there are any changes to the beneficial owners, et cetera, they will have 30 days to report those changes. As with everything else, there are penalties for non-compliance very similar to the FBAR. They are not to be ignored. There are financial and potentially criminal penalties which are imposed.

On a go-forward basis, likely we’re going to want to include language in our engagement agreements when we form entities to clearly spell out who is taking on what responsibility for these filings; not only on initial formation but on subsequent changes. We may not hear from clients when there are changes. We need to spell out what our obligation is and what we are leaving to the client to report back to us or to seek assistance in updating their reporting. Also, in operating agreements or shareholder agreements, likely we want to insert language that requires incoming members as a pre-requisite to becoming a member that they agree to provide the information that’s needed to report on them as a beneficial owner.

So, this is going to be far-reaching and I’m finding, even now, almost two years after this Act was passed that many, many, many professionals don’t know about this. And if the professionals do not know about it, then certainly the clients don’t know about it. So, the time is now to get the word out. FinCEN has indicated in the final regulation that they will do a public information campaign of sorts. But we don’t know when that will happen, and we can’t rely on that. So, the time is now for us to get informed and act and get our clients informed. So, if you’ve yet to hear about this, Google the Corporate Transparency Act, Google the CTA and there’s going to be more and more information coming out about that.

Thank you, Gary, for enlightening us on what estate planners need to know about the Corporate Transparency Act.