A Primer on Charitable Lead Trusts 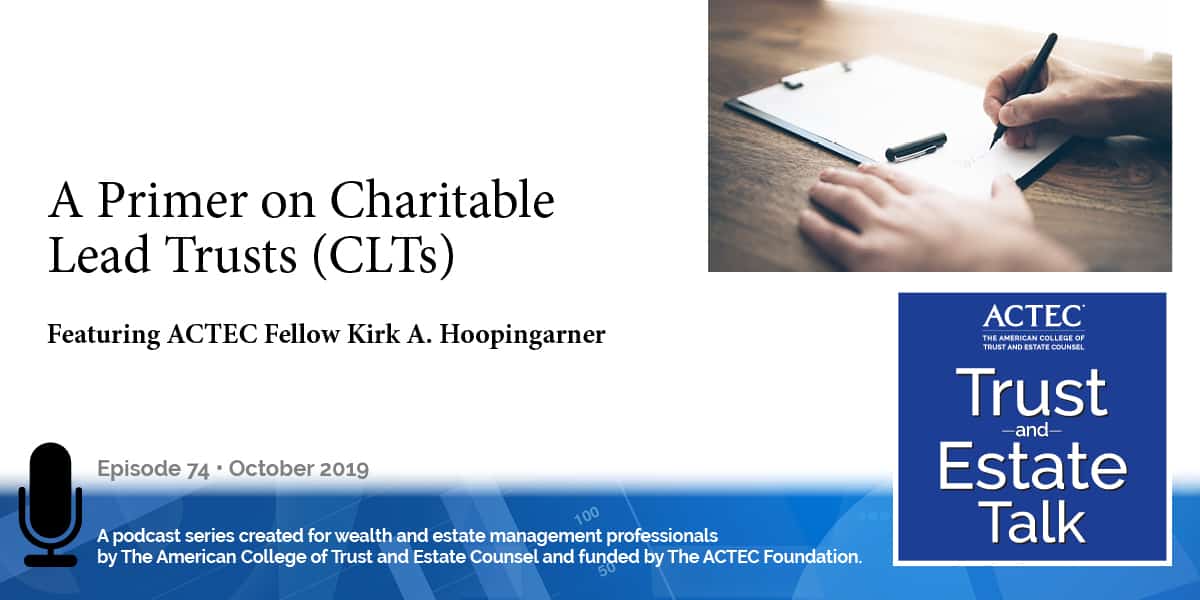 “A Primer on Charitable Lead Trusts,” that’s the subject of today’s ACTEC Trust and Estate Talk.

This is Susan Snyder, ACTEC Fellow from Chicago. To educate us on the rules that govern a popular gifting technique, Charitable Lead Trusts, you’ll be hearing today from ACTEC Fellow Kirk Hoopingarner from Chicago. Welcome, Kirk.

Thank you, Susan. A Charitable Lead Trust provides for income payments to at least one qualifying charitable organization for a period that is measured by either a fixed term of years or for the lives of one or more individuals or a combination of the two. There are two main types of payment terms for Charitable Lead Trusts: one, an Annuity Trust often referred to as a CLAT, where the charity receives an annuity that is either a fixed percentage of the initial fair market value of the trust assets, a fixed sum, or an amount that is based on a formula intended to produce a specific tax result. The other type is a Unitrust, often referred to as a CLUT, which is a fixed percentage of the net fair market value of trust assets, valued at least annually, usually the first business day of each calendar year.

Most donors prefer the Nongrantor Trust, especially if they anticipate the trust income will be less than the charitable payments that are being made. However, if a donor would like a big deduction in the first year of the trust because the donor anticipates receiving substantial taxable income that year, a Grantor Trust may be preferred. The remainder interest usually is given either to the donor, also referred to as a reversionary interest, or the family of the donor, often done for a leverage technique to pass wealth gift tax-free. This leverage is the result of how the charitable income, gift and estate tax deduction is computed. The tax value of the charity payments is equal to the present value of the payments using as the discount rate 120 percent of the federal midterm rate under Code Section 1274(d)(1), and it’s rounded to the nearest 2/10ths of 1 percent. You can use a rate for one of the two months preceding the month of transfer. This means that when rates are relatively low as they have been for many years, the deduction is higher. And if the trust total annual return is much higher than the discount rate assumed, that extra amount actually provides for additional amounts to eventually pass gift tax-free to the family members designated to receive the remainder at the end of the term.

For example, if a donor contributed $1 million to a 10-year 5 percent Charitable Lead Annuity Trust, with the remainder going to his children and the discount rate at the time was 1.4 percent, and the trust actually earned 5 percent each year, then over $250,000 could pass to the children eventually, gift tax-free. Note that the same result would occur with a Grantor Retained Annuity Trust where nothing would go to charity. So, you really need a client who is both charitably inclined and also interested in benefiting the family for a CLAT to really make sense.

Some special rules to note — for a Grantor Trust CLAT, if the grantor dies during the term of the trust then it is subject to a special recapture rule where a portion equal to the original deduction minus the discounted value of all the amounts paid to the charitable lead prior to the grantor’s death will be subject to income tax when the grantor dies. A grantor of the Grantor Trust can at any time elect to release her reversionary interest and have the entire trust pass to charity without recognition of income. A special note for generation-skipping planning — where the grantor wants to have trusts eventually pass to grandchildren — CLATs do not work very efficiently because, for a Charitable Lead Annuity Trust, the exemption is allocated at the time plus a discount rate is applied, but the value at termination is the denominator. So if that trust appreciates greatly by the time the charitable lead terminates, that appreciation is all going to be part of the denominator and could cause an inclusion ratio greater than zero and cause a generation-skipping tax.

For CLUTs, however, the inclusion ratio is better in the computation because they focus on the value of the trust when it was created. One thing you may want to consider is using a Testamentary CLAT if your client has a taxable estate and is considering leaving a lump sum to charity. With such a trust, the charity would receive about the same amount, but over time. And the leverage from the lower discount rate would result in amounts passing estate tax-free to the client’s children. Also consider structuring the payment amount so that it increases every year. This is allowed by regulations and provides more leverage for eventual gifting to the remainder for the children. A relatively safe approach here would be to use the same rule that is applied for grantor retained annuity trusts which allow a 20 percent increase each year.

Charitable Lead Trusts are subject to annual filing requirements. You need to file a Federal Form 5227, and if it’s a non-grantor trust, a Form 1041. You also need to provide information to the grantor, if it’s a grantor trust, and for all trusts, they often need to be registered with the state body that administers charitable bequests and charitable organizations. While the federal estate tax exemptions are relatively high, there is not as much need or motivation to use CLATs for reducing transfer taxes like I described above. But if the exemptions decrease in 2026 or earlier or even further reduce, this could change. Also, any client considering a multi-year campaign pledge may want to utilize such a trust in making that multi-year grant to a charity. Thank you.

Thanks, Kirk, for teaching us about Charitable Lead Trusts.

When to Pursue a Trust Reformation Action, Thoughts in a UTC State

Understand ways to amend an irrevocable trust under the Uniform Trust Code (UTC), including a decanting transaction from a trust and estate expert.

END_OF_DOCUMENT_TOKEN_TO_BE_REPLACED

Learn key elements that should be included in funding agreements including five essential recommendations to help them stand up to court scrutiny.