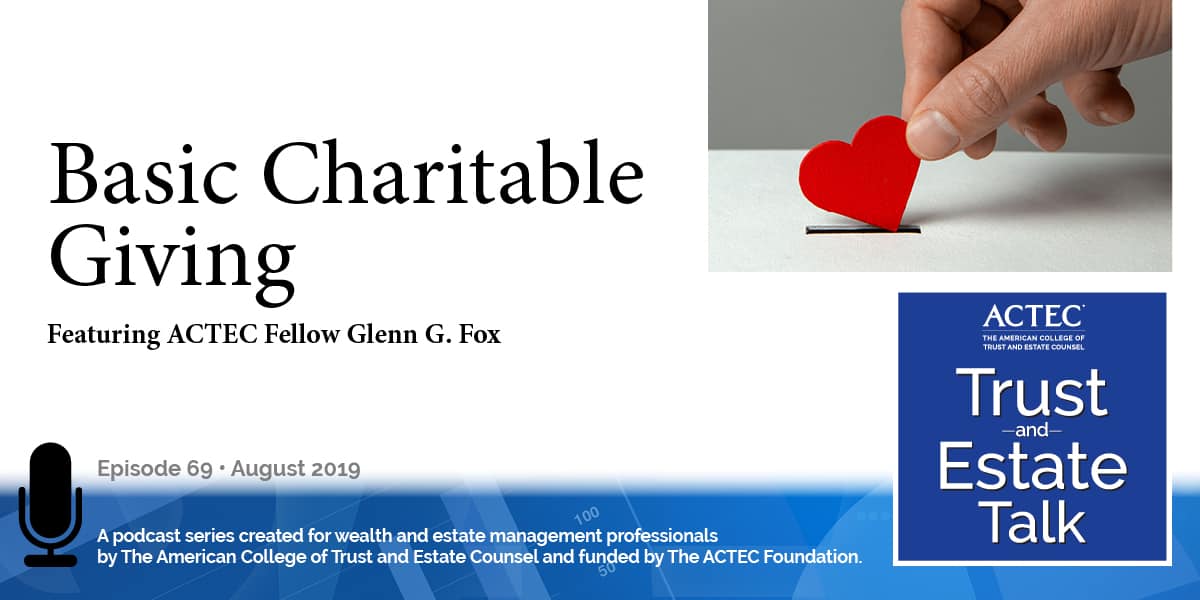 This is Cynda Ottaway, ACTEC Fellow from Oklahoma City. What are the fundamentals of basic charitable giving? To answer that question, you’ll be hearing today from ACTEC Fellow Glenn Fox from New York City. Welcome, Glen.

Thank you. What I’d like to cover in the time we have today is an overview of charitable giving in the income tax context, the estate and gift tax context, and then just a general overview of how the differences between public charities and charitable foundations operate.

So, on the income tax side of things, the question that I think initially comes up is: how are your contributions deducted for income tax purposes? What are the factors that you need to consider? I would break that down into 4 factors to consider when determining the deductibility of an individual’s charitable contribution.

So, those are the four factors that we look at, and we are going to delve into each one of those a bit to give a sense of what the impact is. As I noted, the first thing that you look at is: what type of property you are contributing? If you’re contributing short-term capital gain property to the charitable entity, only your basis is deductible for income tax purposes. There are some exceptions for things like inventory, scientific property or computer equipment, but for example, if you are giving short-term capital gain property as let’s say marketable securities that were just purchased within the past year, you would only be able to deduct your basis – what you acquired the property for, even if it’s gone up in value tremendously. Long-term capital gain property generally, for gifts to a public charity, you will get the full fair market value deducted. So again, if those marketable securities have been held by you for a certain period of time, but beyond a year regardless of the period of time, and you contribute that property to a public charity, you’ll be able to deduct the full value of the property.

Now, there are also limitations on the timing of the deduction. The charitable deduction is limited to certain percentages of the donor’s contribution base, which is a defined term. It’s defined as the donor’s adjusted gross income without regard to any NOL (Net Operating Loss) carrybacks. The annual limitation can be 20 percent of your AGI (Adjusted Gross Income), 30 percent or 50 percent of your AGI, depending on what kind of property is donated. Excess contributions over the 20, 30 or 50 percent limit can be carried forward up to five years.

Everything we focused on up until now has been individual donations, just a small caveat for corporations.  If a corporation is making a charitable contribution, it can only offset up to 10 percent of its AGI. For this reason, quite often we don’t see corporations taking the charitable deduction when they’re making a contribution. Instead, they will likely take the position that the contribution is a business deduction under Section 162 where they’ll actually get more bang for their buck, as it were. But there are circumstances where a corporation might just, for perhaps public relations purposes, want to take it as a charitable deduction.

How do you make sure you get the gift tax charitable deduction when you make a contribution to a foreign charity? If you read the regulations here, they basically say the entity can be any kind of entity. It doesn’t have to be a US entity, but when you delve into the rules a little bit and you look at a part of the code that talks about the qualification of a charity, that’s Section 508 (d)(2)(b), it provides that gift and estate tax charitable deductions are not permitted if the entity has not notified the IRS that it’s applying for recognition as a 501(c)(3) organization. Most foreign charities will not have done that. This would give you pause as to whether or not your contribution will qualify.

Thank you, Glenn, for walking us through the rules around basic charitable giving.

Taxes Emerging in Europe to Pay the Cost of COVID

“Taxes Emerging in Europe to Pay the Costs of COVID,” that’s the subject of today’s ACTEC Trust and Estate Talk. Transcript/Show Notes This is Doug Stanley, ACTEC Fellow from St. Louis, Missouri. During the COVID pandemic in many jurisdictions in Europe, there had...

END_OF_DOCUMENT_TOKEN_TO_BE_REPLACED

Co-chair of the ULC’s Cohabitants Economic Remedies Act Committee explains the importance of having laws concerning the economic rights of unmarried cohabitants.

END_OF_DOCUMENT_TOKEN_TO_BE_REPLACED

An overview of Self-Settled Spendthrift Trust statutes of limitations and review of Wyoming’s legislation, House Bill 64.