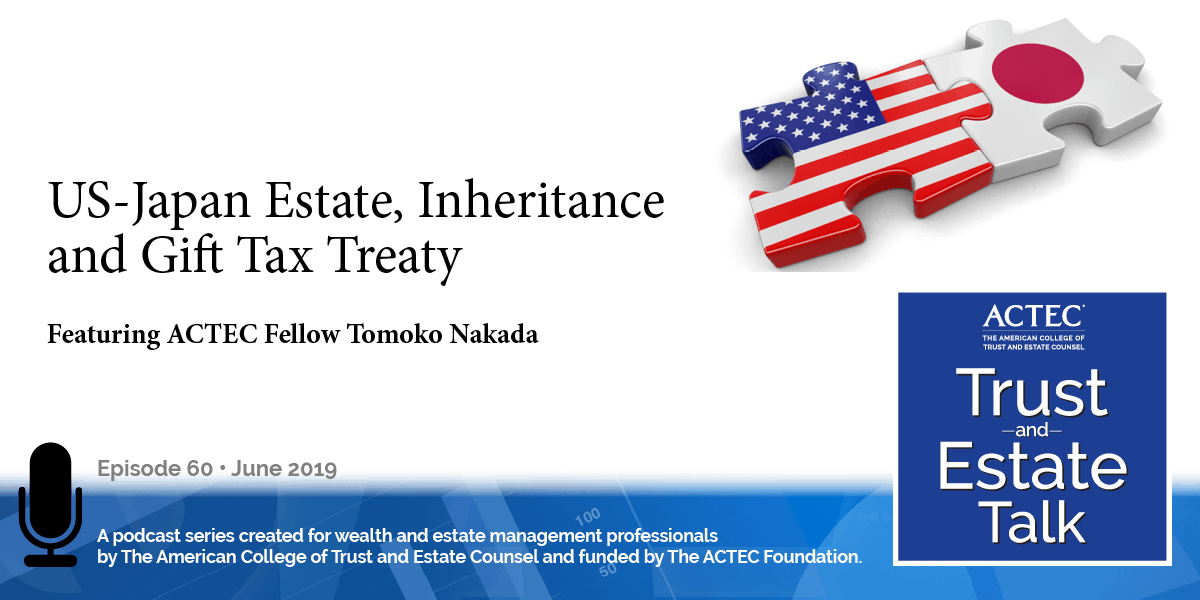 Hello. This is Susan Snyder, ACTEC Fellow from Chicago. To discuss the US-Japan Tax Treaty will be ACTEC Fellow Tomoko Nakada from Tokyo, Japan. Welcome Tomoko.

My name is Tomoko Nakada, an attorney at law admitted in Japan and in New York. First, I will talk about the three points of the Japanese Inheritance Tax. First, unlike the United States, the taxpayer is the recipient of the assets, such as an heir. Secondly, unlike the United States, the basic exclusion amount is very low. The amount differs depending on the number of legal heirs. The basic exclusion amount is 30 million Japanese yen, plus the amount obtained by multiplying 6 million Japanese yen by the number of legal heirs. For example, if a husband dies leaving his wife and two children, the basic exclusion is 48 million Japanese yen, which is around 420,000 US dollars. Lastly, the inheritance tax rate. The calculation of the total inheritance tax amount, is complicated. The tax rate is applied not to the estate as a whole, but to the amount each heir is legally entitled to receive. The tax rate starts from 10 percent. The maximum rate, 55 percent, is applied when the amount each heir is legally entitled to receive is over 600 million Japanese yen.

There was a change in the Japanese Inheritance Tax Law to prevent the tax avoidance. Wealthy Japanese individuals have tried to avoid taxes by transferring the assets overseas. In response, the Japanese tax agency has been expanding the scope of the taxes on overseas assets since 2000. Before the 2000 reform, only the residency of the beneficiary mattered. Currently, worldwide taxation applies if the beneficiary was a resident in Japan or even if the beneficiary was a non-resident in Japan in certain cases, such as if the decedent was a resident in Japan at that time of his death. For example, Tom, Andy’s only heir and his brother/US citizen and resident, inherited Andy’s assets located in the US when Andy died in Japan. Tom must pay the Japanese Inheritance Tax on the US assets which he inherited if Andy, US citizen, resided in Japan for more than 10 years when he died.

Here, I will explain about a case at the National Tax Tribunal in the case of another country where no inheritance or tax treaty exists between Japan and that country. By the way, Japan has the Inheritance Tax Treaty only with the United States. In the case of another country, double tax can be imposed. In this case, decedent X was a resident in a country named F. The name of this country is anonymized. It may be one of the European countries. X died and left assets in F, R and S countries. Because X was a resident in F country, F imposes its estate or inheritance tax on his worldwide assets. On the other hand, X’s only heir was a resident in Japan. Therefore, Japan imposes its inheritance tax on the worldwide assets which the heir inherited.

When the heir filed the Japanese Inheritance Tax Return, he claimed the Foreign Tax Credit for all the tax imposed on worldwide assets by F country. The tax office allowed the Foreign Tax Credit only for the tax imposed on assets located in F country, not for the tax imposed on assets located in R and S countries. In this case, the heir said, “If F country is the US, I can get relief to avoid double taxation from the treaty. But no treaty exists between F country and Japan. Why do I need to pay the taxes to both countries? The tax rate in total is 70 percent. It is unfair. To avoid a double taxation is the mutual goal in the world. I should get relief under the Domestic Tax Law,” he said. But the National Tax Tribunal denied this heir’s claim. “Sorry, you can get no relief under the domestic tax law because it clearly limits the scope to the foreign tax imposed by the country where the assets are located.” Because no treaty exists, the heir had to bear the double tax.

Thank you for listening.

Thank you, Tomoko. Thank you for educating us on some of the US and Japan Inheritance Tax Treaty.