Situs and the Resident Trust 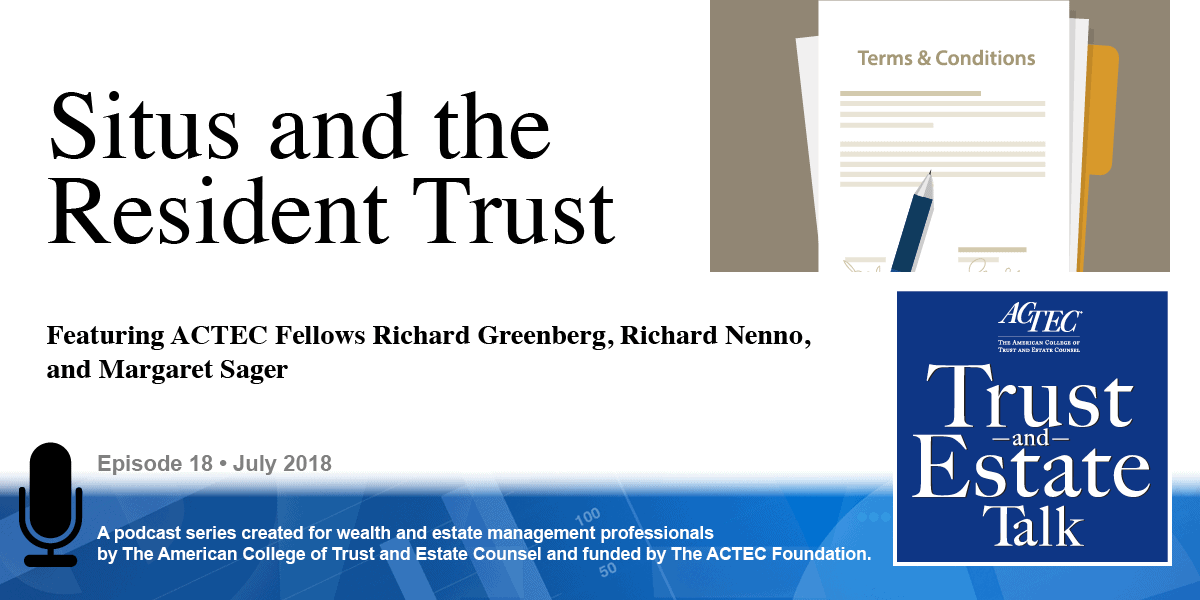 “Situs and the Resident Trust.” That’s the subject of today’s ACTEC Trust and Estate Talk.

This is Doug Stanley, ACTEC Fellow from Saint Louis, Missouri. Should your trust pack up and hit the road? Is a change of situs a must if there are taxes to be saved? To learn more about this topic, you will be hearing today from ACTEC Fellows Rich Greenberg of Woodbridge, New Jersey; Dick Nenno of Wilmington, Delaware; and Margaret Sager of West Conshohocken, Pennsylvania. Welcome everyone.

Thank you, Margaret. This is not an insignificant issue. Just to illustrate, if the trustee of a trust created by a California resident incurred a $1 million long-term capital gain in 2017, the trust could have saved over $108,000 of California income tax if it had a non-California trustee. Similarly, if a non-grantor trust created by a New York City resident incurred a $1 million long-term capital gain in 2017, the trust could have saved over $107,000 of New York tax if the trust had been structured to estate tax. Also, people these days are considering including capital gains in DNI (Distributable Net Income) because the trust gets to the top tax rate so much more quickly than individuals and married couples. But, if you run the numbers, if that distribution goes to a resident of a state that taxes the income, then there’s a good chance that the added state tax cost will exceed what you could have saved from the federal level. And, so the states tax trusts are under five different theories. There are eight states that don’t tax trust income at all, and of the ones that do tax, there are five bases. The first is if the trust was created by the will of a resident or decedent of the state. The second, if the trust was created by a trustor, who was a resident or domiciliary of the state. The third is if the trust is administered in the state. The fourth is if there is a resident fiduciary or trustee. And the last is if there is a resident beneficiary of the state. It’s rare that the governing law clause in a will or trust will have any bearing on the taxability, and there are relevant cases that give us guidelines on how to escape tax in various states. There are statutory or regulatory guidelines for avoiding tax in states such as New Jersey and New York. And, Rich, would you tell us how New York and New Jersey tax?

Sure, New York and New Jersey were one of the earliest states to impose an income tax on trusts and estates and, in doing so, they came up with a methodology which kind of follows some of what Dick talked about, which is, that you start with the point that the grantor or trustor is a resident of the state, and if you meet that test and add that grantor or trustor at the time the trust became irrevocable, either an inter-vivos trust when it became irrevocable, or when the grantor died, and therefore it becomes irrevocable. At that point the starting point in both New York and New Jersey and several northeastern states was to say, “OK, that’s enough, that makes you a resident trust.” Interestingly though, case law found that that was not a permissible test, that it didn’t meet constitutional muster, and so as a result a lot of states that followed that traditional methodology – including New York and New Jersey –  had to add something so each of those states came up with little different add-ons. In New York and New Jersey what they did is they say, “Okay, in addition to the trust being irrevocable at the time the grantor was a resident, the trust became irrevocable,” they said, “In addition you have to have one of three indices. Either, A, there had to be assets in the trust which were New Jersey- or New York-based assets; B, there had to be a trustee who was a New Jersey or New York resident; or, any one of the three; there was source income earned by the trust from the source of the particular state.” What’s interesting is that it’s evolved over time. Exactly what is an asset in that state? Is it merely stock? Is it stock in a corporation? Other issues? What exactly is source income? And, of course, the third test, the trustee being a resident of the state. Dick’s example was perfect; you can have a New Jersey trust set up by a New Jersey resident that earns $10 million worth of income and the only thing that makes it taxable is they pick somebody from Camden, New Jersey to be the trustee and, ironically, had they picked somebody from Philadelphia, Pennsylvania, well, guess what? There wouldn’t have been any tax at all, and the planning device necessary, planning and establishing the trust becomes critical for the dollars you pointed out.

Thank you all for your thoughts on change of trust situs.