The New Rules of Professional Conduct for Lawyers 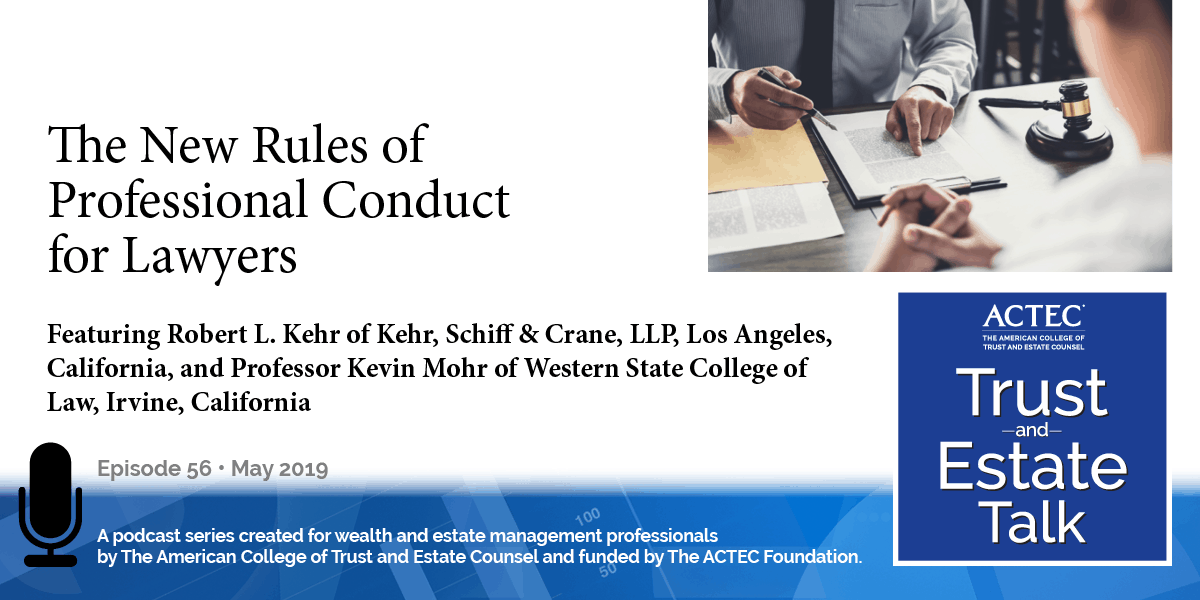 “The New Rules of Professional Conduct for Lawyers,” that’s the subject of today’s ACTEC Trust and Estate Talk.

This is Susan Snyder ACTEC fellow from Chicago. Today you will be hearing from Bob Kehr, of Kehr, Schiff & Crane, LLP of Los Angeles, and Professor Kevin Mohr of Western State College of Law, Irvine, California, on Rules of Professional Conduct for Lawyers. Welcome Bob and Kevin.

Thank you. We’re going to talk for a few minutes about the interplay of four Rules of Professional Conduct, Rules 1.2, 1.4, 1.6 and 1.7. And in California in addition to Rule 1.6, the Confidentiality Rule, we have a statutory rule that governs the duty of confidentiality that we’ll also be talking about.

I’m going to start by talking about Rule 1.2 briefly and the purpose of this discussion is to focus, as I hope will become clear by the end of our little talk, on the application or one application of these rules in the context of estate planning and trust administration. I’m going to begin with Rule 1.2, which in the ABA Model Rules is labeled as Scope of Representation & Allocation of Authority Between Client & Lawyer.

The importance of defining the scope of the representation is that a lawyer is likely to be found to have all the duties that a lawyer owes to every client, whenever the client actually and reasonably relies on the lawyer to provide particular legal services. There’s a subjective and objective standard if there’s reliance, which is subjective, and if the reliance by the client is objectively reasonable in the circumstances, then the lawyer has those duties. So it becomes important for lawyers to make absolutely clear both in their fee agreements and by their subsequent conduct, what the scope of the representation is and to take advantage of Rule 1.2(c) and the ability to limit the scope of representation to those things the lawyer is competent to do and wishes to undertake.

To pick up with what Bob just said, it’s important that you consult with your client regarding the means and objectives of the representation. Oftentimes the client is going to have to consent to certain actions you’re going to take on behalf of the client. You’re going to need to attain the client’s informed consent, which is going to depend upon the sufficiency of what you have disclosed to the client, the advice that you’ve given to the client. And finally, you’re going to have to explain what are the developments, what’s happening in the lawsuit that ties into your duty of diligence, keeping your client informed, keeping your client apprised, not neglecting the client matter. All of these require you to communicate with the client. That’s the subject of Rule 1.4 (Communications). Rule 1.4, which is so central to the lawyer’s duties of involving conflicts of interest, duty regarding the scope of representation, the duty to exercise independent professional judgment. Essentially, it’s the linchpin of the rules of professional conduct.

Next, we need to consider Rule 1.6 (Confidentiality of Information), which is our rule concerning the duty of confidentiality. 1.6, the rule concerning the duty of confidentiality involves a lawyer’s duty, essentially not the gossip about the client. It’s much broader than the attorney-client privilege, so it’s not just a communication, information that’s been communicated to you by your client, but any information that might be detrimental to your client, that might embarrass your client and so forth, you’re not allowed to gossip about without the client’s consent. Again, we go back to the duty of communication.

But in California, it’s unusual that our duty of confidentiality actually has resided since 1872 in a statute. The Business and Professions Code 6068(e), which is originally the Field Code that was adopted by California back in the 19th century. And it is unchanged, the language is unchanged except for a certain gender neutral language. And it provides that it’s a lawyer’s duty to maintain inviolate the confidence, that’s loyalty and the trust of your client and at every peril to himself or herself to preserve the secrets of his or her client.

And that brings us to Rule 1.7 (Conflict of Interest: Current Clients) and the one part about that that I want to talk about his paragraph (b). 1.7 is the current client conflict rule; paragraph B covers a multiplicity of situations, one of which is almost all joint representations. That should be clear from the language of the rule itself. It is also described in comment eight of the ABA Model Rules and comment two of the California version of Rule 1.7. Almost all joint representations involve a potential conflict of interest that is going to require disclosure and consent under that rule.

And that brings us to the application to these four rules to estate planning and trust administration. These are situations in which lawyers quite commonly are involved in communicating with a whole host of people, family members, trustees and beneficiaries. And these are people who might have different goals, different needs, different expectations of confidentiality and different hoped-for outcomes from the communication with the lawyer.

It is not at all unheard of for lawyers in the estate planning and the trust administration communities to view themselves as the problem solvers for the group. And they want to be able to, and to some extent even have a good reason for wanting to be able to communicate freely with family members, and in the trust administration side of things, not just family members but other beneficiaries or with a trustee who might not be a family member. It is essential for the lawyers in this situation or in these situations, plural, to have in mind that communicating freely with multiple people might result with multiple client relationships that have different attributes to them. Anyone who actually and reasonably relies on the lawyer for legal advice or representation probably has a lawyer-client relationship and is entitled to all of the protections of the lawyer-client relationship, including undivided loyalty and full performance of the duty of confidentiality.

Some of these problems are easily solved by the lawyer through effective communication. So for example, if a lawyer does estate planning for parents or for grandparents and wants information to be shared among family members so that the next generations will understand what the plans are, the lawyer certainly can do that with the consent of the clients. The lawyer can disclose what otherwise would be confidential estate planning information. But it must be done in a way that does not allow the recipient of that information to think that there is a lawyer-client relationship. So, if the information is disclosed to family members and the family member now asks the question, what does that mean for me if or will I have the ability to–stop and think about it? If you answered that question, isn’t there a risk that the recipient of that information will think that they are now obtaining legal advice and that they have the right to rely on the lawyer for protection.

The same thing can come up in the trust administration field. It is extremely careful for any lawyer in either of these situations to be mindful of unintended lawyer-client relationships and to be mindful of the risk that a lawyer-client relationship that is intended might evolve into a broader relationship that the lawyer wants to have. These are situations in which the lawyer has complete ability to protect himself or herself. And by doing so, to protect the clients or the people who might otherwise think they’re clients, by allowing them to recognize when they need independent legal advice.

And if I could add just one more thing, I just read an article recently about a famous director who often also acts as both the editor and the cinematographer on his films. And he was asked why did he do that? And he said, because those are two conversations I don’t have to have. Well my suggestion is, have those conversations with your clients.

Thanks Kevin, thanks Bob for talking about those four important rules and how they apply to the trust and estate field.