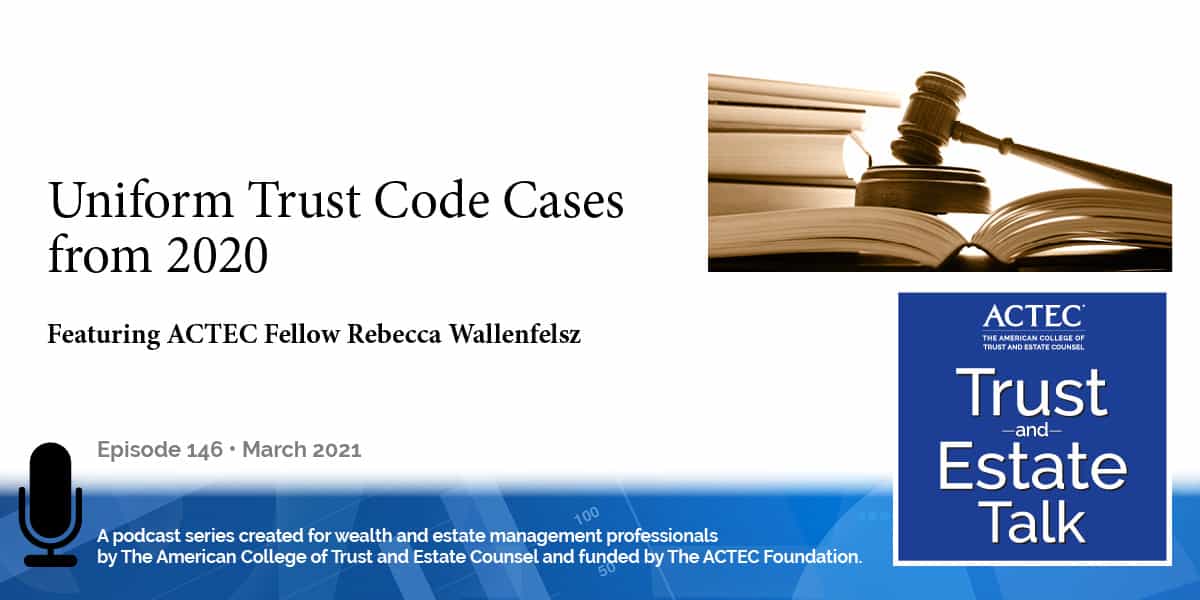 This is Susan Snyder, ACTEC Fellow from Chicago. We had a couple of new cases applying the Uniform Trust Code, or UTC, in 2020. To give us more information on these cases, you will be hearing today from ACTEC Fellow Rebecca Wallenfelsz of Chicago. Welcome, Rebecca.

Thanks, Susan. I’m happy to be here today. And, yes, I just want to highlight three cases that came out that caught my eye, and I hope all of you will find interesting, as well.

The first is from Kansas – the Kansas Supreme Court. It’s in matter of Jill Petrie St. Clair Trust. And that involves a reformation of a trust that – and the reformation was designed to avoid the reciprocal trust doctrine. So, that one caught my eye because in the year of 2020, I see so many planners doing SLATs, for example, for couples. And this involved a SLAT – and probably SLAT that had gone wrong; and I think they were trying to fix it.

So, this case – the husband and wife created identical trusts for each other. Right? And literally – identical trusts. The only difference between the two trusts were the names on them, who the owner was, and the spouse identified as the beneficiary. Otherwise, same exact terms, same dollar amount gifting. They were just done, maybe a year apart.

So, what the wife did in this case is, with the drafting attorney they petitioned the court to reform the one trust – the trust she created for her husband – to add in the provisions that they alleged were inadvertently omitted, which was scrivener’s error. And so, they did this under 415 of the Uniform Trust Code. So, this is the provision that allows for reformation, if it’s proved by clear and convincing evidence that there was, in fact, a mistake made.

So, they did this not only at the trial court level, but they were able to, under Kansas local rules, appeal this ultimately, up to the Kansas Supreme Court, and get a Kansas Supreme Court decision issued reforming the trust to try to avoid that reciprocal trust doctrine. So, they were successful in getting the Kansas Supreme Court to give them an affirmative opinion, which will be useful to them. Now, it’s been interesting to see if we actually get anything out of the IRS on this – if it ever does do a tax court case – to see how the IRS reviews this. But certainly, from a property law perspective and a trust law perspective, they took the steps that were needed. And proceeding under 415 was the perfect way to go to set them up for that tax argument because what 415 does with a reformation is it, arguably, made this retroactive to the original trust so that these trusts always had different terms. That was, at least, the Supreme Court decision.

So, that case is out there. It’s worth reading. And if you find yourself in this situation as a draftsperson or someone that’s trying to defend trusts, there is something to look at as maybe a model. So, that’s one case.

The other one is one that’s also interesting, I think, from a trust person’s perspective, as well as from a litigator’s perspective. And that’s Garland v. Miller. And that’s a Kentucky Appellate Court case. And this one is interesting because here, several of the beneficiaries were looking to modify a trust–an irrevocable, non-charitable trust–under the UTC Code Section 411. So, it’s the Kentucky version of 411. And what’s interesting about this one – the reason why this caught my eye and was an interesting read –is the basis for the Court’s ultimate decision.: in this case, to allow them to terminate the trust.

So, just a little bit of background on the UTC for those of you who don’t know your UTC Code Sections cold. So, 411 allows a settlor and the beneficiaries, by consent, to modify an irrevocable, non-charitable trust, even if the modification or termination is inconsistent with the material purpose of the trust. So, basically, that is a very broad, broad standard that allows settlor and beneficiaries – that they can all get together and all agree to change an irrevocable trust. And that’s what they were trying to do in this case.

What you’re seeing here is an objecting, which is why we end up in an Appellate Court decision. And the Court actually agreed and said, no, you can’t do that. And the reason why is because it was an irrevocable trust – an irrevocable trust in which the settlor expressly waived any right or power to ever terminate this trust or modify the trust, which are typical irrevocable trust provisions. So, not only did he say the trust is irrevocable, but he specifically waived and released any power or right to terminate the trust. And because that was there in the trust agreement, the Kentucky Court said, you can’t use that provision of 411 because your trust document says something else. It says you’ve given up this right. So, it’s not applicable. So, just be aware of that from both a drafting perspective, and from a litigation perspective, because they’re trying to reform it. And looking at that code section, pay attention to your provision about what makes your document irrevocable. And, are you going to be in that kind of fact pattern, where because of the rights released by the settlor, that option under 411 is not available to you?

Now, luckily in this case, the Kentucky UTC also had different provisions under 411(b) that allowed a court to still modify, so long as they thought the modification or termination was necessary to achieve a material purpose. So, they still could accomplish what they wanted to, but they just didn’t proceed the way they thought. So – and this might be useful for anyone doing some planning – if they’re concerned about their UTC statutes and the power a settlor has to consent to a modification or termination, robust language in your trust agreement may avoid that issue of 411.

In re Trust of Margie E. Cook – Nebraska

And the last case I just want to highlight came out of Nebraska, and it is in re: Trust of Margie E. Cook. And this is a case – and there have been a series of cases on this – and this is, I think, just the latest that addresses the question of whether future beneficiaries of a revocable trust have standing to contest trustee provisions or trust modifications or terms of a document while the settlor is still living. And there have been a couple of these. This is just the latest one, which is why it caught my eye.

And in this case, the Nebraska Appellate Court, our facts were, there were friends of the settlor who were named in a document. They were contesting about the validity of a trust amendment, as well as a sale by the trustee of a condominium that had allegedly been left to them. And the Nebraska Court said they lacked standing. They couldn’t challenge validity of the trust or an amendment to the trust. They had no standing to contest the perceived actions based on the provision of the UTC Section 604 that says, really, the settlor’s the only party in interest.

And here, although they argued that the settlor was incapacitated, the Court said it didn’t really matter. Didn’t matter. That was irrelevant to their conclusion. They said you, by virtue of being a future beneficiary of this document – you’ve got no standing. It’s just the settlor and the settlor’s authorized representative, if in fact the settlor were incapacitated, who had that standing.

And that’s contrary to a Michigan Appellate Court case in re: Rhea Brody Living Trust, that came out in 2017, that reached the opposite conclusion under their version of the Uniform Trust Code that said, a daughter had standing to challenge the actions of a trustee.

So, there you have it. Those are my handful of cases under the UTC that we are taking a closer look at from this year.

Thanks, Rebecca. All very interesting. The second case is a good reminder – we are now so used to being allowed to modify revocable trusts that we may forget to pay attention to how our trust document describes that irrevocability. So, thanks, Rebecca, for highlighting those very useful UTC cases.