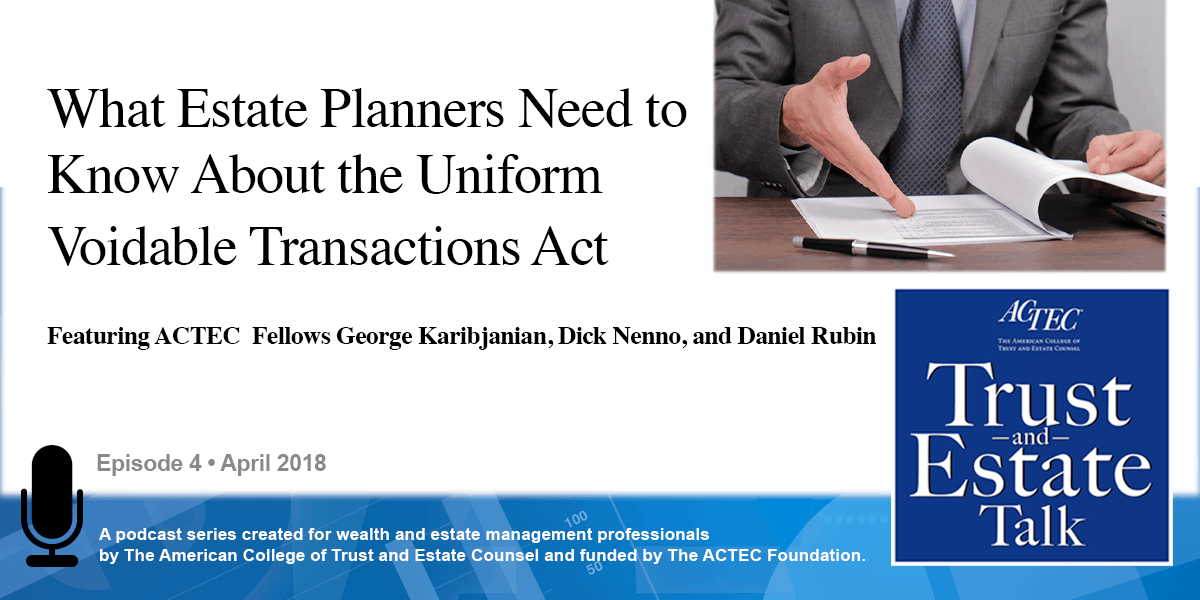 What estate planners need to know about the Uniform Voidable Transactions Act… That’s the subject on this ACTEC Trust and Estate Podcast.

This is Susan Snyder, ACTEC Fellow from Chicago. Trust and estate counselors need to be aware of the problems with the Uniform Voidable Transactions Act when advising clients. To educate you more on this topic you’ll be hearing today from ACTEC Fellows George Karibjanian of Boca Raton, Florida; Dick Nenno of Wilmington, Delaware; and Daniel Rubin of New York City. Welcome everyone.

Thanks Susan, this is George Karibjanian. The Uniform Law Commission in 2014 passed a revision to the Uniform Fraudulent Transfers Act, renamed as the Uniform Voidable Transactions Act. The act is mostly left intact, statutorily, but a lot of the problems for estate planners come in the introduction of several new comments to the act. The comments are very persuasive to a court and the fear is that these comments can be used to set precedent for interpretations of the statute. That is the issue that we address to ACTEC today. And to give some background I will turn it over to Dick Nenno, who will then turn it over to Dan to give highlights, and then we will review one major issue that seems to be of concern.

The danger with the Uniform Voidable Transactions Act comments is that the comments confuse traditional self-settled trust law and Fraudulent Transfer Law. This is of particular relevance to Asset Protection Trusts but also to some of our very common estate planning techniques like Charitable Remainder Trusts and GRATs and GRITs and other QPRTs. And what the danger is, is that the comments suggest that if someone from a non-APT state, like New York, wants to set up a trust in an APT state, that won’t work, because even though the state law of the non-APT jurisdiction says that to have a fraudulent transfer you have to have some actual intent to hinder, delay, or defraud creditors, the inference in the comments is that creating a self-settled trust, of any kind, automatically constitutes that proof to have actual intent to hinder, delay, or defraud.

The problem with this analysis is that since the late 15th century, English common law has relied on the self-settled trust doctrine, which is reflected now in Section 156 of the Second Restatement of Trusts, Section 58(2) of the Third Restatement of Trusts and Section 505(a)(2) of the Uniform Trust Code, that say that the creditors of someone who sets up a trust for his or her own benefit may reach the settlor beneficiary’s interest. There are now 17 states that have changed that rule to allow some form of Asset Protection Trust. And the determination that we have found, that our analysis suggests, that the inference that the creation of any self-settled trust is automatically a voidable transaction, is inaccurate. Under this Second Restatement of Conflict of Laws, you should be looking at trust doctrine to determine whether assets of self-settled trusts are reachable by creditors, and, under those authorities, if you have set up your trust properly, then the assets should be immune from creditor claims.

And this is Dan Rubin. This issue is not purely an academic issue, this issue is a practical issue for estate planning attorneys. And the reason why it is a practical issue for estate planning attorneys is because the suggestion that the creation of any self-settled trust is by definition a fraudulent transfer means that estate planning attorneys who are simply representing their clients in connection with various aspects of their estate plan, yes, including Asset Protection Trusts, but also including other trusts that are technically self-settled even if we don’t think of them that way, such as inter vivos QTIP trusts, GRATs, QPRTs, INGs and so forth, means that the attorney’s assisting his client or her client in connection with a fraudulent transfer. That would almost certainly be a violation of the attorney’s ethics obligations under Model Rule 4.4 that has been enacted in 49 of the 50 states, with the only exception being California where it’s also probably an ethical violation because Model Rule 4.4 provides that a lawyer shall not use any means that have no substantial purpose other than to embarrass, delay or burden a third person, which has been thought to mean a fraudulent transfer.

In addition, beyond the ethics, there’s the potential for civil liability for an attorney in connection with counseling or assisting a client with a fraudulent transfer. And then there is the possibility of criminal liability under the laws of about 10 states, including, probably the best known, California’s Penal Code Section 531 which criminalizes the act of helping someone to transfer property through a fraudulent transfer. These issues can be addressed through a public policy decision if that’s what a legislature wants to do, to state via statute that a transfer to an Asset Protection Trust or any self-settled trust is a fraudulent transfer, but, unfortunately that was not what was done with the Uniform Voidable Transactions Act, instead what was done there is that the comments create this backdoor exception that the legislatures that are enacting the UVTA might not notice until it’s too late.

Let me ask you guys a question because the two big arguments that seem to be in favor of the UVTA as opposed to our arguments are, that:

Any thoughts on either of those issues?

Well certainly on the second issue they don’t come out and say it’s voidable per se, but they say the intent is inferred, which really amounts to the same thing.

In essence, paraphrasing what the comments say, the statute itself puts a burden of proof on the creditor to prove a fraudulent transfer by a preponderance of the evidence. But when the comments say that it’s to be inferred that there was this intent by dint of the fact that that the transferee is an Asset Protection Trust, it really is a distinction without much difference.

So then the only recourse it seems that people have or various states would have would be to try to legislate around the comments which is exactly what Arkansas and Indiana have done. I know this is being discussed in other states and it is our hope that if anyone listening to this podcast has any influence or is a member of any legislative body or a bar section that creates legislation that they consider this and consider either statutorily working around the provisions or having a blanket provision that they do not accept the new comments from the Uniform Voidable Transactions Act.

Not only is it our hope but would urge you to take this on because it could, as Dan explained it, it could have severe ethical and practical consequences for your practice.

Thank you all for educating us on the pitfalls of the Uniform Voidable Transactions Act.